Miley's using her spotlight to go way beyond "I'm a feminist!" or "I kissed a girl!" 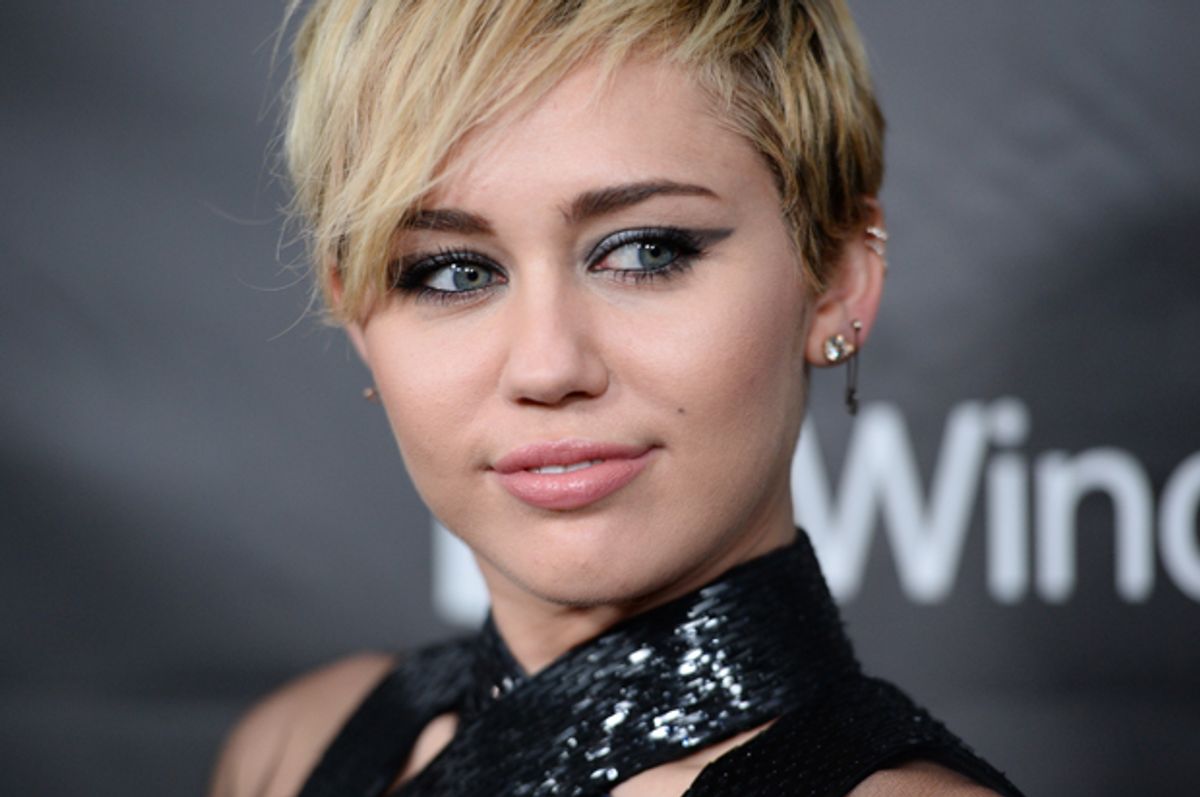 Let Taylor and Katy continue to passive aggressively duke it out. Let the Rihannas and Gagas and Beyonces and Meghans have their own magazine covers and chart toppers. There is one queen, and her name is Miley.

In her already eagerly picked apart cover profile in the new Paper magazine, the 22 year-old former Disney star and semi-retired tongue brandisher does exactly what she does best -- she pushes all the buttons. There are the photos, from the cover image of Cyrus nude and embracing a pig to the others, of her clad only in body paint. And then there are her numerous social and political and sexual declarations, just the latest in her ongoing litany. As writer Amanda Petrusich notes, "She's perhaps her generation's most unlikely social activist, and also one of its most powerful." In the space of just a few paragraphs, Cyrus talks about how she decided to become a vegan, about the Happy Hippy Foundation, the nonprofit she founded to "raise funds and awareness for homeless and LGBT youth," and about her own fluid orientation.

It's not the first time she's tackled any of these subjects. Last year, she brought a homeless man, Jesse Helt, as her date to the VMAs, to speak on behalf of the "1.6 million runaways and homeless youth in the United States who are starving, lost, and scared for their lives right now." And in a May interview in Out, Cyrus talked about gender identity and said, "I didn’t want to be a boy. I kind of wanted to be nothing. I don’t relate to what people would say defines a girl or a boy, and I think that’s what I had to understand: Being a girl isn’t what I hate, it’s the box that I get put into."

Now, in Paper, she elaborates, saying, "I am literally open to every single thing that is consenting and doesn't involve an animal and everyone is of age. Everything that's legal, I'm down with. Yo, I'm down with any adult -- anyone over the age of 18 who is down to love me. I don't relate to being boy or girl, and I don't have to have my partner relate to boy or girl." She says she's had romances with women, "But people never really looked at it, and I never brought it into the spotlight."

With her squeaky clean teen star origins, her seemingly limitless energy and her savvy capacity for provoking shock, Cyrus knows exactly how to get a reaction — and she's been doing it a very long time. She was only 15 when she appeared on the cover of Vanity Fair, clutching just a sheet. At 16, she was trying out pole dancing moves. A year later, video of her partying with a bong surfaced. A year after that, she was already emerging as a vocal LGBT rights advocate and unapologetically declaring that "Every 18-year-old explores sexuality and experiments and tries things…. People see me as this perfect Disney star, and the moment I put out a record that says 'I'm not 11 years old anymore,' people look down on me." Then she cut her hair and the world went bananas over her — gasp! — "rather masculine and avant-garde" look. More recently, she's spoken out against "backward censorship laws that force police to arrest women for the most basic human right, to breastfeed your child in public or to be topless on a beach."

Famous and provocative as she is, not everything Cyrus does is either wise or entertaining or plain interesting. I still maintain that "Can't Be Tamed" is a horrible song. The world would go right on spinning without her thoughts on the evils of gluten. And as writer Petrusich notes, Cyrus has racked up a YouTube compilation's worth of "Worst Moments." But you'd be hard pressed to find a 22 year-old who hasn't.

And in a landscape of pop princesses who've coyly played at kissing a girl, Cyrus brazenly uses her flair for getting a reaction to reveal far more of herself than just her skin. That makes her an artist — one who's still early in her journey and still finding her voice, but an artist nonetheless. And if along the way she wants to be an advocate and an ally, that makes her a role model too. She's figuring it out and making mistakes along the way, but it's pretty terrific, brave stuff to watch. As she told Out in May, "All these things that I do get all this attention. But then what do I do once I have everyone's attention?"