Shaving is the pits: Take up arms with Lena Dunham, Madonna and Miley in the fight against body hair oppression 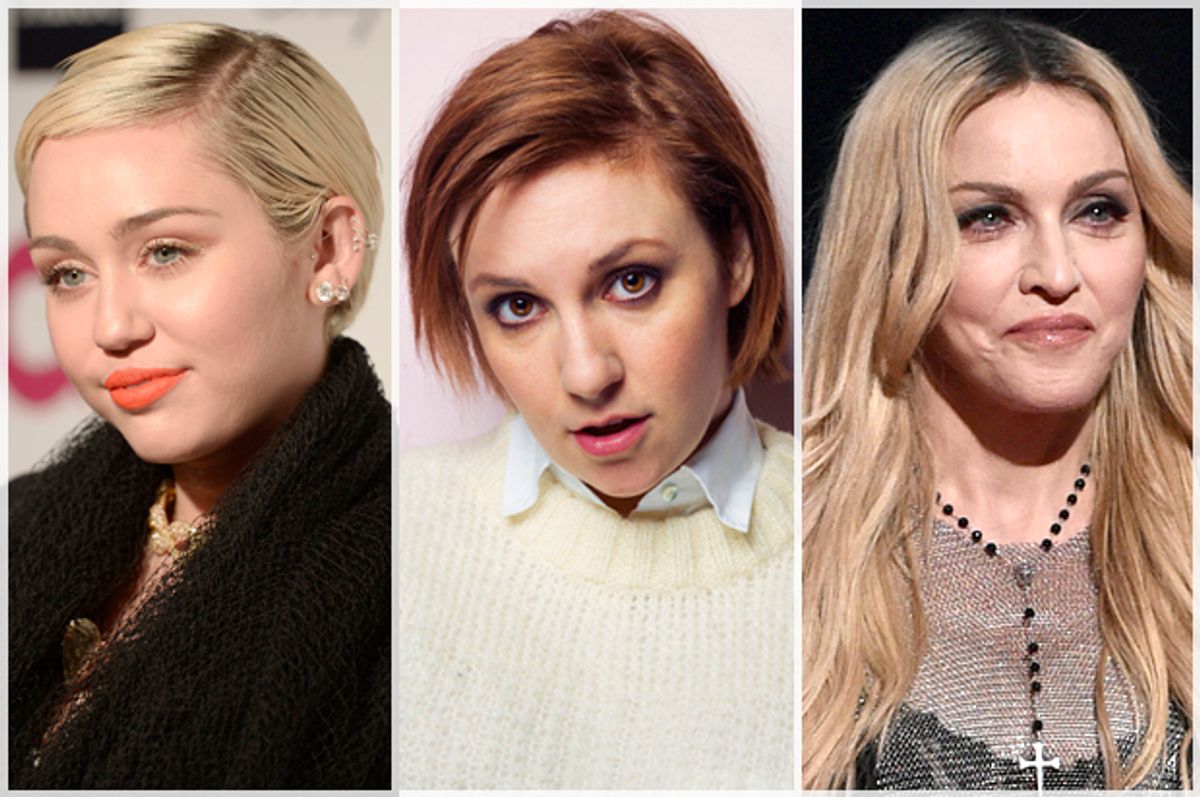 Though they're easy to conflate, the trappings of conventional femininity are not the hallmarks of womanhood. The recent developments in the journey of Caitlyn Jenner have already sparked plenty of conversation — and debate — about the question of "What Makes a Woman." Now, another kind of reassessment is underway, thanks to a Chinese photo contest that invites women to stand up for equality -- by showing off their armpit hair.

Feminist activist Xiao Meili started the contest on China's microblogging site Weibo late last month, with the hashtag #WomensArmpitHairCompetition and the invitation to show off "characteristic, beautiful and confident" images of women with underarm hair. Shanghaist reports that "The first place winner receives 100 condoms, second place gets a vibrator and the lucky third place winner gets 10 female urination devices." Xiao says that shaving is a fairly recent and Western-influenced development, noting, "For my mother’s generation, a woman not shaving her armpits is totally natural." And she asks, "Women's armpit hair is considered to be offensive, rude and ungraceful — how come it makes people so uncomfortable?" Yeah, how come?

The controversy over body hair has long been intense and heated, though it usually centers around the bikini area. Say the word "Brazilian" in a crowded online conversation, and expect a stampede of commentary over bodily autonomy, sexuality, and realistic and unrealistic beauty norms. But as the trend in below deck grooming has moved away from total bareness, perhaps it's natural — especially as we find ourselves moving into sleeveless season — to begin looking around as other areas of traditional female deforestation. And while what most women do with their pubic regions is generally known to pretty limited audiences, legs and armpits are bound to be the subject of far more scrutiny — and criticism.

As the BBC reports, Xiao's challenge has sparked intense debate, and both male and female commenters declaring, "No-one forces me to shave my armpit hair. I do it because I think it's gross not to" and "It's not polite to leave your armpit hair unshaven, no matter if it's men or women." And here in the U.S., there commenters on the New York Times story on the completion who wonder, "I don't see how 2 minutes in the shower everyday and a razor and soap and water are so time consuming and expensive."

When a famous female — like Madonna or Julia Roberts or Penelope Cruz or Miley Cyrus, all of whom have been known to take a break from the razor — dares to flaunt a little underarm hair, it makes headlines, and often, declarations of "Cringe!" It's considered so strange for a woman to have hair there it's downright newsworthy. Yet much of the response to the Chinese competition has been enthusiastic and supportive. Though a relatively small number of women have posted photos, the contest has drawn among those who've participated are three feminists who were arrested in March as part of a protest against sexual harassment on public transportation. And the challenge shows signs of catching on here as well. Lena Dunham has already declared her goals for the summer include "Grow armpit hair," and as The Cut notes, her costar Jemima Kirke already has a jump on her there.

Xiao, meanwhile, says the issue isn't merely one of questioning aesthetics. She tells CNN, "Some people question why I make a fuss about the hair. They say there are more important issues that need to be solved like domestic violence and sexual assault. I think they are equally important. They're all about fighting for gender equality." It's about being able to make choices for ourselves, and being accepted for them, and about understanding that there's a lot more to being a woman than conforming to anybody's definition of gender but our own. And about, whatever you do, being able to raise your arms in the air like you just don't care.