Rachel Dolezal is not Caitlyn Jenner: Race and gender are not the same 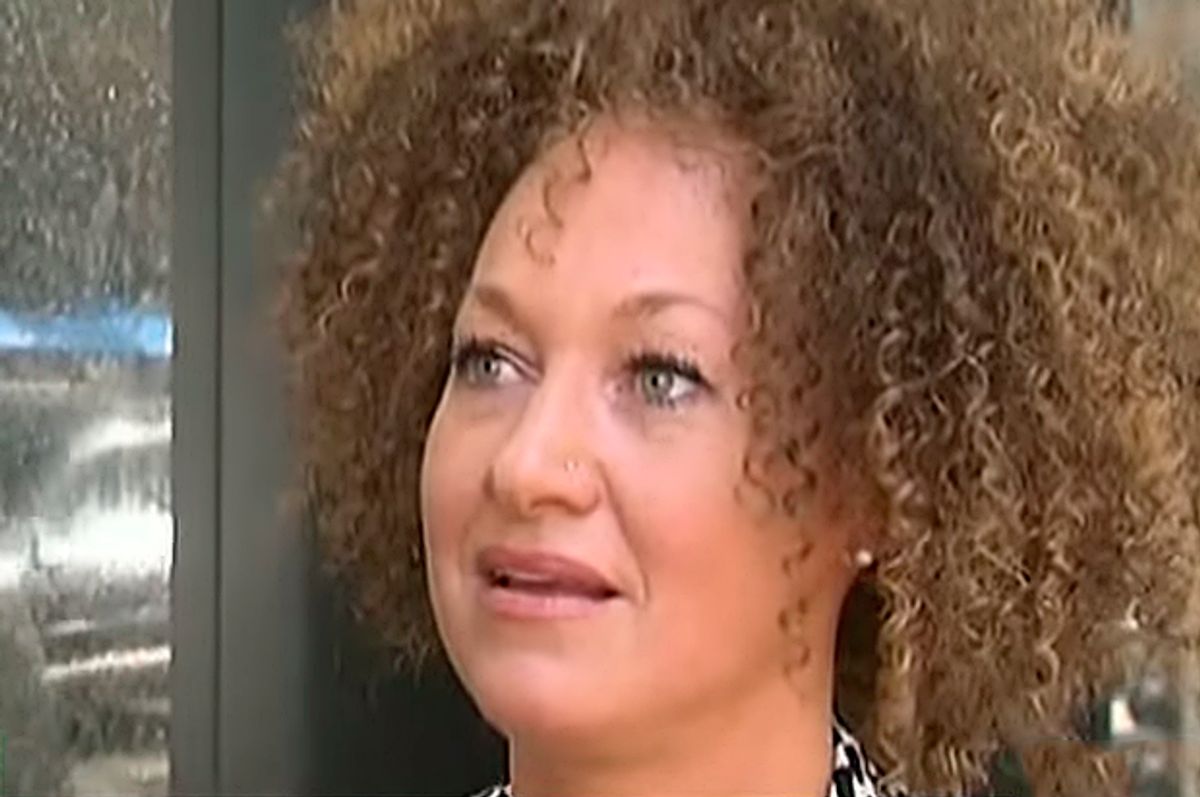 In the days since the story of Rachel Dolezal — the Spokane NAACP leader who appears to have spent the past several years passing herself off as African American — broke, there's been a particularly prevalent knee-jerk reaction that's distinguished itself from the multitude of responses. Though it's been expressed in different ways, the sentiment is always the same: Hey, if Caitlyn Jenner can be transgender, why can't this chick be "transracial"? I'm going to try to answer that in a thoughtful and reasoned way, but if you're pressed for time today, you can just cut to the part where I say, Oh my God no stop talking.

Until she sits down with, I don't know, I'm guessing Anderson Cooper, and tells her whole story in her own words, Dolezal's motivations remain largely locked in her own head. But on Friday, she gave a peek at where she's coming from, telling KREM News, "It's more important for me to clarify that with the black community and my executive board than it is to explain it to a community that I, quite frankly, don’t think really understands the definitions of race and ethnicity." She added, "I actually don’t like the term 'African American.' I prefer the term 'black.' Yes, I do consider myself to be black and that’s because … you know, that’s how I identify." Her mother, Ruthanne Dolezal, meanwhile told "Today" Monday that "I think Rachel has tried to damage her biological family and those kind of claims, as false as they were, seem to serve her purposes in her mind." And her adopted brother Ezra tells Buzzfeed she warned him three years ago, "Over here, I’m going to be considered black, and I have a black father. Don’t blow my cover," and adds, "She puts dark makeup on her face and says she black,” he said. "It’s basically blackface."

Race is not a label that sticks neatly and definitively to everybody. Much depends on how one is perceived to the outside world, the culture in which one is raised and a person's own baseline for identification. If a person feels more at home in a different community than the one of her origin,  that's understandable. We are more than the families and places we're born into. And Dolezal wouldn't be the first white woman to rock some dreads. One also doesn't need to be of a particular group to be a sincere advocate for justice and progress. Dolezal's commitment to racial justice certainly seems very real, and the NAACP on Friday issued a statement saying that "One’s racial identity is not a qualifying criteria or disqualifying standard for NAACP leadership. The NAACP Alaska-Oregon-Washington State Conference stands behind Ms. Dolezal’s advocacy record." As Melissa Harris Perry very cautiously asked this weekend, "Is it possible that she might actually be black?" But she added — and this is important — "I don't want to say that it is equivalent to the transgender experience, but there is a useful language in 'trans' and 'cis.'"

If you want to argue that this woman fully believes in her own blackness, there's a case to be made there. If however you want to stamp your feet and pull some, "Well, if Caitlyn Jenner gets to a wear a dress, Rachel Dolezal gets to call her hair texture a 4," please do not. I've seen a whole lot of responses lately from people arguing that Dolezal's just part of a "false leftist social construct," just like gender, and gleefully pointing to her story as evidence that being transgender is just a case of waking up and deciding one day to be something else. As The Federalist pondered, "Rachel Dolezal is not black, and Caitlyn Jenner is not a woman (putting aside the basic biological facts of how sex-selection and chromosomes work, Jenner’s not even undergone the so-called sex change surgery; by all accounts, his equipment is still intact)." And the Daily Mail says her tale "brutally lays bare the hypocrisy of liberal America."

Let's start with the evidence that Dolezal's is not simply a story of passing, one in which she might merely argue, "You never straight up asked if I was white!" Her parents say she's fabricated claims of being born in a teepee, using bows and arrows to hunt for her own food and living in South Africa. In light of the recent revelations, local police have suspended investigations into her claims of being targeted for multiple threats and hate crimes. When she applied for a police ombudsman commission, she checked the boxes for white, black and Native American identity. (Her parents say her ancestry is German and Czech with a trace of Native American.) So can those who lump Dolezal's story into that of the transgender community give trans people who tell the truth about their lives and the journeys a little more credit here? Can they differentiate between identifying a certain way and making stuff up?

Can they also consider for a minute that race and gender are actually two different things? That however you want to argue for the complexities of the constructions of both — and I'm with you there — those complexities are not the same? A fascinating Rolling Stone piece just last year explored the biology of being transgender, noting, among other points, "the brains of trans people do look different." A Boston University study earlier this year supports the idea that "There is increasing evidence of a biological basis for gender identity." And as trans woman Meredith Talusan further illuminates, "The fundamental difference between Dolezal’s actions and trans people’s is that her decision to identify as black was an active choice, whereas transgender people’s decision to transition is almost always involuntary." So if you want to make a case that being "transracial" is like being transgender, knock yourself out, but I'd like to see some data first, thanks.

But of course the people making that argument don't want to have any conversation of the kind. They instead eagerly see the Dolezal story as white guilt run amok, with a heavy side platter of validation for their own transphobia. And it's all nonsense. In the brilliant series "Transparent," the transitioning character Maura's daughter asks, "Are you saying you’re going to start dressing up like a lady all of the time?" "No, honey," her father replies. "All my life, my whole life, I’ve been dressing up like a man. This is me." That's the difference. And as Caitlyn Jenner put it in her recent interview with Vanity Fair, "Bruce always had to tell a lie. He was always living that lie. Every day he always had a secret, from morning till night. Caitlyn doesn't have any secrets." Dolezal, on the other hand, still seems to have been holding on to a whole lot of them.