Charlie Sheen, worst dad ever: He slammed his ex-wife in an ugly Father's Day meltdown, but it's their kids who really lose

Not "winning" at fatherhood, divorce or decency, that's for sure 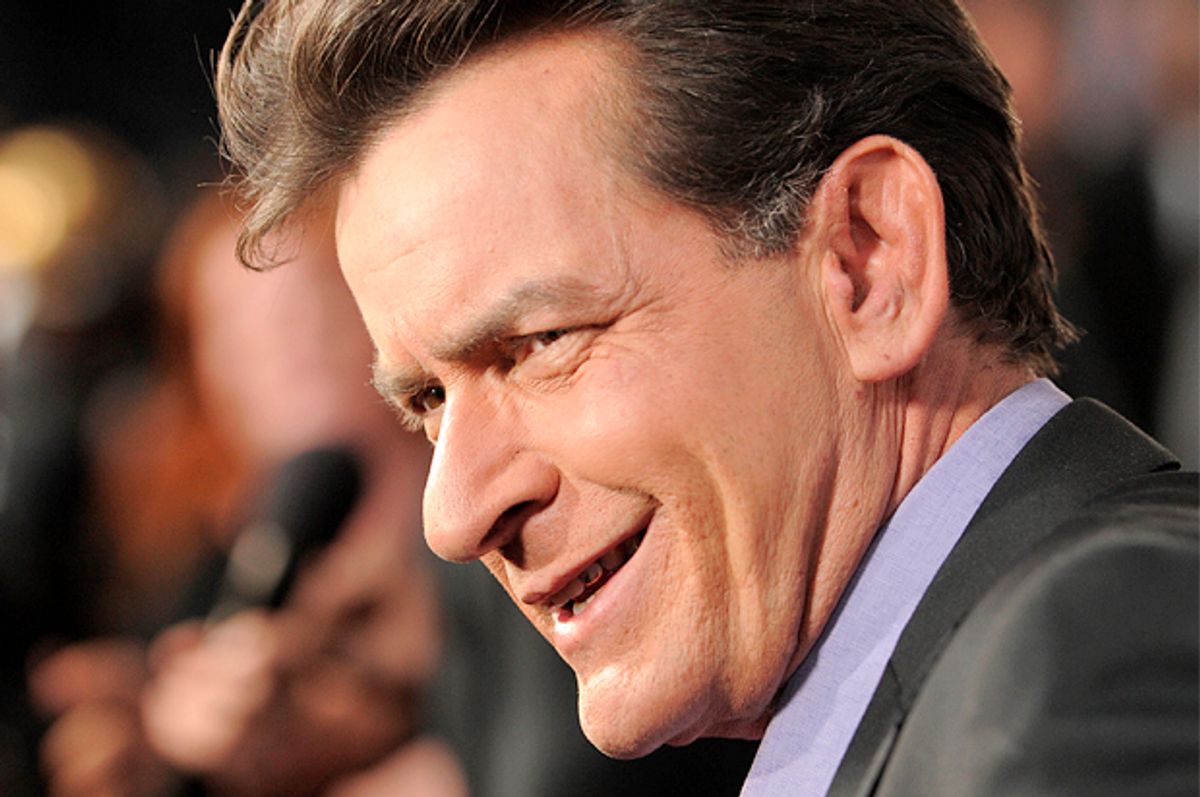 What were you doing Sunday? Were you having a cookout with your dear old dad? Celebrating with the father of your own kids? Conspicuously avoiding Facebook so you wouldn't be reminded of your dead/deadbeat/abusive father in the midst of all those loving tributes? If you were Charlie Sheen, you were doing exactly what you have done many, many other days of the year — going on an incoherent Twitter rant.

The tiger-blooded actor of the canceled "Anger Management" took to social media to compare and contrast two of his former wives Sunday, noting that "Brooke M is a sexy rok star whom I adore D Richards a heretic washed up piglet Shame pile Happy Father's Day!!!" He then followed up with an "open letter to the media" full of observations that "Denise Richards is a shake down piece of s__t doosh phace & worst mom alive! a despicable charlatan who…" and I'll paraphrase here, engages in sexual acts with members of Isis. He went on to say "I have paid that Klay-Vinnik leaky diaper over 30 Mil and she calls me a DbD! [deadbeat dad] see u in court you evil terrorist sack of landfill rash." And he added, "this gangster Sheenius will be Winning! Duh!! really grandma? I'm the ARCHITECT OF THE TERM YOU LEAKY AND MALARIA RIDDLED PUDDLE OF SHIT STINK DECAY!! and now I'm out last note; this lab rat is from a retarded shit hole named 'Downers Grove.'" It goes on in this vein. The word "whore" also, unsurprisingly, comes up. The messages have also, unsurprisingly since been deleted. I'll say this for him — he can turn one hell of a colorful phrase. Terrorist sack of landfill rash? Now that's a metaphor!

Sheen has a lengthy history of tumult with the mothers of his four youngest children, as well as numerous other women, come to think of it. During their rancorous 2005 divorce, Richards filed a restraining order and claimed, "I can no longer accept [Sheen's] abusive and threatening manner and must stop him from the cycle of his abuse toward me and our children and his continued threats of violence and statements that he is going to kill me." In 2011, ex-wife Brook Mueller also won a restraining order against Sheen, and his young sons were removed from his home. So on the Sheen scale, I guess the fact that he's tweeting so amicably toward Mueller now is some sign of emotional growth. Richards, meanwhile, takes this week's "Not Having Any of It" crown for simply tweeting Sunday, "Happy Dad's Day! @charliesheen have a great trip in Mexico! Kids were disappointed u weren't here for it- Hey we'll celebrate when u r back!" Earlier on Sunday, Sheen spoke to Extra in a more restrained mood, saying, "I am beyond fortunate to be able to spend this special day with my sons, Bob and Max, along with Brooke and my extended family of friends.

Sheen, who will likely never again claim the title "highest paid actor on television," has been in and out of public consciousness the past few years, a long way from that strange and rather extended moment when being an apparent total jerk was somehow part of his incredibly successful career. His rants lack the shock entertainment value they once did. And now that he's apparently made nice with his most recent ex, his pointed vitriol toward Richards just seems acutely unpleasant.

This weekend I spent time with a friend whose sister is going through a grueling custody dispute. We talked about poisonous divorces we've witnessed, ones in which once loving individuals use the children they made together as weapons against each other. And let me tell you — it's the goddamn worst. I know I don't need to sell anybody on the idea that Charlie Sheen is not a role model for anything, including parenting, but let his deranged public outburst be a reminder of how bad and ugly these things can get. When you become a parent, your number one imperative, for the rest of your life, is being a parent. It doesn't mean you aren't other things — your career, your friendships, your romantic relationships. But your kids come first. Period. It's that simple. And anything you do to hurt them, even if your primary target is somebody else, is a seriously gross move. I wonder how Sam and Lola, Sheen's daughters by Richards, feel about their dad calling their mother a "puddle of s__t stink decay" to his millions of followers. I wonder how they feel about him referring to her sexual behavior. I wonder how they feel about his marked preference for the mother of his sons, and the time he's spending with that family. That's not about Charlie being Charlie and acting outrageous; it's about toxic behavior toward a man's own children. Happy Father's Day, Charlie Sheen. This year you gave your daughters something — a meltdown message of hate towards their mom. You still call that "winning"?