Taylor Swift, a Daenerys Targaryen for our time: Walking the fine line of perception between populist hero and ruthless power-player

She stands up to Apple in the name of the people, but finds herself on the wrong side of working photographers 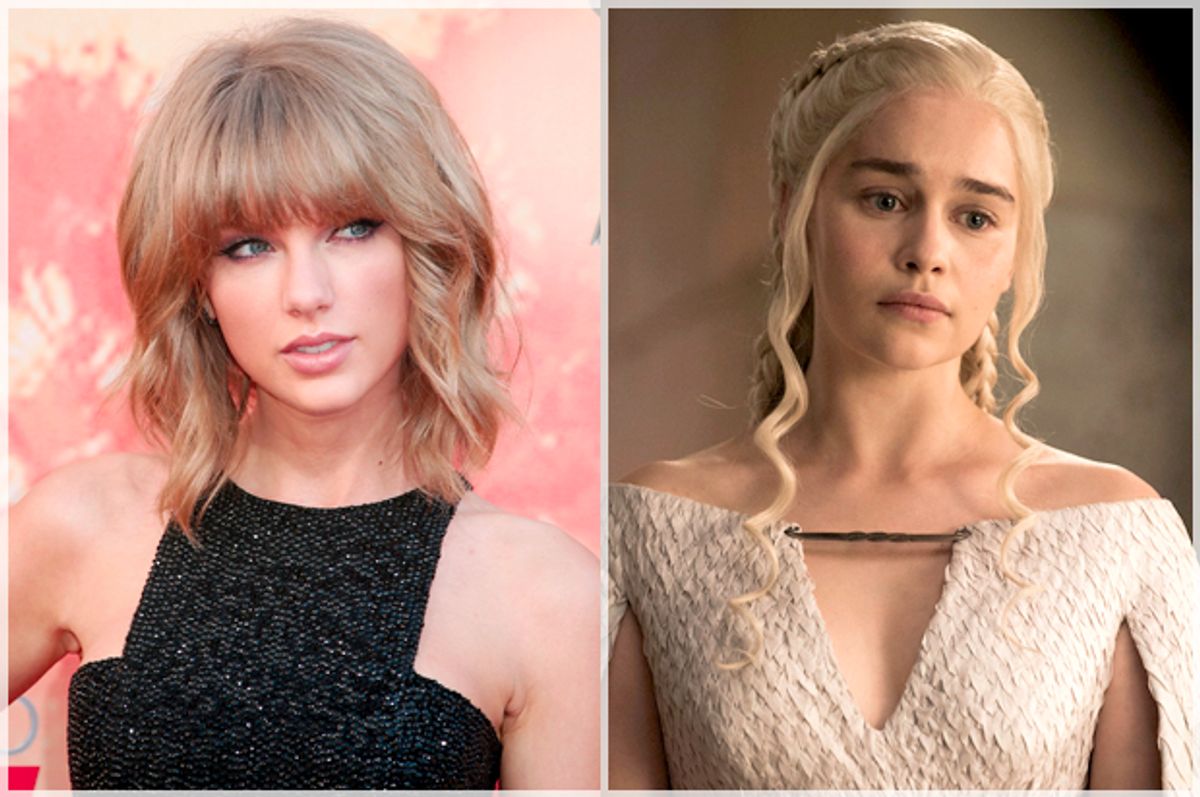 It's a question that's been asked in various forms over the course of the past few days, but nowhere more succinctly than in a Tuesday Washington Post headline: "Is Taylor Swift a hero or a hypocrite?" I'll tell you what she is. Taylor Swift is Daenerys Targaryen. In the relatively short space of her public life, she's gone from underestimated little blonde girl to full blown, not to be messed with khaleesi. And like the Mother of Dragons, she is seemingly both benevolent and fierce, at once respected and reviled.

On Sunday, the Breaker of Chains showed Apple who's boss in a one-day battle over the company's new streaming service and its intended three-month free trial period. In a post on her Tumblr, Swift wrote to that she would be withholding her multi-platinum album "1989" from Apple Music because "This is not about me. This is about the new artist or band that has just released their first single and will not be paid for its success…. Three months is a long time to go unpaid, and it is unfair to ask anyone to work for nothing." (Swift similarly kissed off Spotify last fall.) And then just like that, boom, a company valued at $741.8 billion acquiesced to the young woman from Wyomissing. Apple Senior Vice President Eddy Cue announced via Twitter that "#AppleMusic will pay artist for streaming, even during customer’s free trial period."

But then, right at her moment of triumph, UK photographer named Jason Sheldon leapt into the fray, Kanye-style, calling Swift a hypocrite for pitting her own business interests against those of working photographers. In a blog post, he said, "It's great to have someone with a huge following standing up for the rights of creative people and making a stand against the corporate behemoths who have so much power they can make or break someone’s career." Then he asked, "Are you really supportive of other artists?… For every artist that is in a secure enough financial and influential position to stand up against the likes of Apple without having to worry that Apple will publicly block your ability to earn a living from their iTunes market place, there are hundreds of professional concert photographers who don’t enjoy that security."

He then posted the contract he received for shooting Swift's tour four years ago, which stipulates the photographer be paid "on a one-time only basis," and if the publication doesn't use the image, not be paid at all. It also grants permission to Swift's management company "to confiscate or destroy" his or her materials. Sheldon noted, "You seem happy to restrict us to being paid once, and never being able to earn from our work ever again, while granting you the rights to exploit our work for your benefit for all eternity. How are you any different from Apple?"

The industry consensus seems to be that Swift's "rights grab" contract is fairly standard, and Consequence of Sound's Ben Kaye generously posits that "It’s worth pointing out that Swift may be entirely ignorant of the terms of these types of photo agreements." As evidence, he notes that when Michael Franti & Spearhead were called out this week for their restrictive photo contract, Franti himself quickly issues a statement that he had "never seen this release and was unaware it was sent to any of you." He then told photographers to "continue to make amazing art and disregard the release."

But Michael Franti is not Taylor Swift. And in addition to being a successful artist and powerful mogul, she's also a celebrity with a carefully crafted persona to maintain. One need only consider that there is an entire tabloid industry devoted to fashion fails and wardrobe malfunctions to wonder if her devotion to protecting artists would be as fierce when it comes to those who could present her in a manner she does not like. Two years ago, Beyonce created a stir — and an unforgettable meme — when her publicity team took some serious umbrage with Buzzfeed's collection of "fierce" moments from her Super Bowl halftime performance, telling the site that "There are some unflattering photos on your current feed that we are respectfully asking you to change." Perhaps Swift is not concerned with the prospect of a Buzzfeed compilation of her with her hair askew or her face in full grrr mode. Then again, perhaps a very, very rich and very, very powerful woman understands precisely the value of image, and how to take what she wants with fire and blood, or at least a fierce contract.