This drug wasn't responsible for the Charleston massacre

And anyone who says it was is telling a dangerous lie 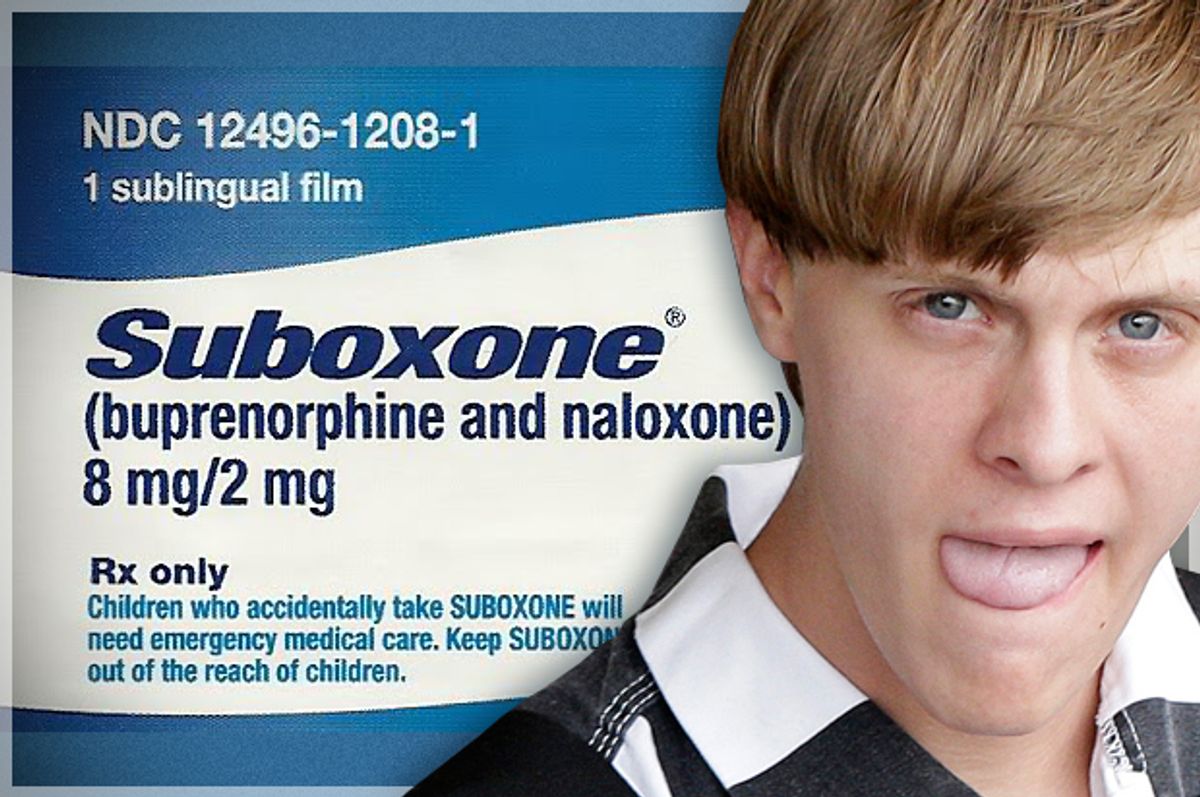 When Dylann Roof was arrested for shooting nine black men and women in a Charleston church last week, the motive seemed pretty clear. He was racist. Very, deeply racist. He posed for pictures wearing white supremacist codes. He burned the American flag. He appears to have registered a website wherein he posted an anti-black manifesto.

But then, another narrative arose. It came out that, in February, Roof had been stopped by police for asking unusual questions in a South Carolina mall. As they searched him, police found a bottle containing Suboxone, a drug that is often used to treat opiate addiction but that, for non-addicts, can be used to get high. Some sources even began to speculate that the drug was to blame, that it made him aggressive enough to commit multiple murders.

Such speculation is utterly ridiculous. As a former heroin addict, I have taken an awful lot of Suboxone in my life. So I have a pretty good idea how it works. And whatever else is true of the drug, one thing is abundantly clear: It doesn’t make you kill people.

Suboxone is an opioid commonly used to treat opiate addiction. Although it used to come in the form of orange, octagonal pills, it is now found in the form of generic pills or thin film strips -- like what Roof was arrested with in February. The drug contains two substances: buprenorphine, a mild opioid, and naloxone, an anti-overdose drug.

When prescribed to addicts, Suboxone is typically used in one of two ways:For one, it can be used as a long-term drug replacement therapy. As Huffington Post's Jason Cherkis detailed in a deeply researched report earlier this year, that approach can allow addicts to function normally while they recover. It eliminates the ups and downs of active heroin use, and may help reduce the risk of fatal overdose, which is especially high after short stints of sobriety -- such as after a brief jail stay or participation in an abstinence-only treatment program.

If you’re on Suboxone, it’s incredibly hard to get high. Because the drug contains naloxone, addicts who try shooting it up will become “dopesick,” and go into physical withdrawal. Likewise, many addicts find that they get dopesick if they shoot up other opiates after taking a dose of Suboxone. Thus Suboxone isn’t just a substitute for heroin, but can actually prevent heroin use.

The other way of using Suboxone is short-term: An addict might take it for five or ten days to help ease the pain of detoxing. It doesn’t make coming off smack a walk in the park, but it does make it somewhat more manageable.

That was the capacity in which I used it -- sometimes legally, sometimes illegally. I was a heroin addict off and on for nine years. As a result, I know a lot of other heroin addicts and a lot of people who have used Suboxone. I have never seen it make someone violent. I have seen people who were already violent continue to act violent on Suboxone, but I have never seem someone who was previously not violent become so from Suboxone use.

Of course, that’s not a scientific study; that’s just my own anecdotal experience.

As it happens, though, professionals agree. Last week, CNN Chief Medical Correspondent Dr. Sanjay Gupta said, “[Suboxone is] not associated with violence or aggression. The only thing is that if you’re withdrawing from some of these types of drugs, that can cause a state of agitation.” However, Columbia University Medical Cetner professor of psychiatry Dr. Adam Bisaga added, "It's highly unlikely that someone withdrawing from Suboxone would have a premeditated, well-developed plan and be able to carry it out. We're talking about very short-fuse, temporary type of irritability that might cause someone to break things or scream or something like that."

The most common psychiatric side effects of Suboxone are anxiety, depression, nervousness, and abnormal thinking. Uncommon side effects observed in 0.1 to 1 percent of patients include abnormal dreams, agitation, apathy, depersonalization, drug dependence, euphoric mood, and hostility. In written statement, the drug's manufacturer reiterated that aggression is not a side effect of Suboxone.

You know what else is not a side effect of Suboxone? Racism. The ideology that drove this shooting existed regardless of what drugs Roof was or was not taking at the time.

Despite the existence of facts and data about the actual side effects of Suboxone, some have tried to blame the Charleston shooting on Suboxone. In an email to reporters, Bill Nojay, a Republican in the New York Assembly, said, “The shooting in Charleston was, like other tragedies, caused by a young man on psychotropic drugs. Gun laws had nothing to do with it, and would not have prevented him from committing his deranged acts.”

Alex Jones' Infowars, meanwhile, has run stories with headlines like “Charleston Shooter Was on Drug Linked to Violent Outbursts” and “Suboxone: The Psych Drug Behind the Charleston Church Shooting?” The former points to user comments in online forums as proof, while the latter relies on general data about drug side effects that are not specific to Suboxone. Neither article bothers to mention that we don’t actually know if Roof was on Suboxone at the time of the shooting.

It’s worth noting that the voices blaming Suboxone for this tragedy are coming from the right. Why is that important? Because it seems like Suboxone is an awfully convenient scapegoat here for those who don’t want to address racism or gun control. After all, if we choose to see Roof’s actions as the result of a drug-induced rampage, then we don’t have to talk about any of the real issues here.

To me, it’s terrible seeing people blame this tragedy on Suboxone. Suboxone is a drug with so much potential to help people, and frequently it’s maligned for a lot of bad reasons. Yes, it can be abused -- but that is also something that’s true of an awful lot of substances that we still recognize have value. It’s not a miracle drug, but I’ve seen it change people’s lives. That’s why I find it aggravating when people blame what happened in Charleston on Suboxone.

In fact, blaming this tragedy on Suboxone is more than aggravating -- it’s dangerous, and it’s dangerous on two fronts. It’s both demonizing a valuable means of addressing addiction and it’s averting attention from the real issues we need to be discussing in the aftermath of Charleston -- guns and racism.