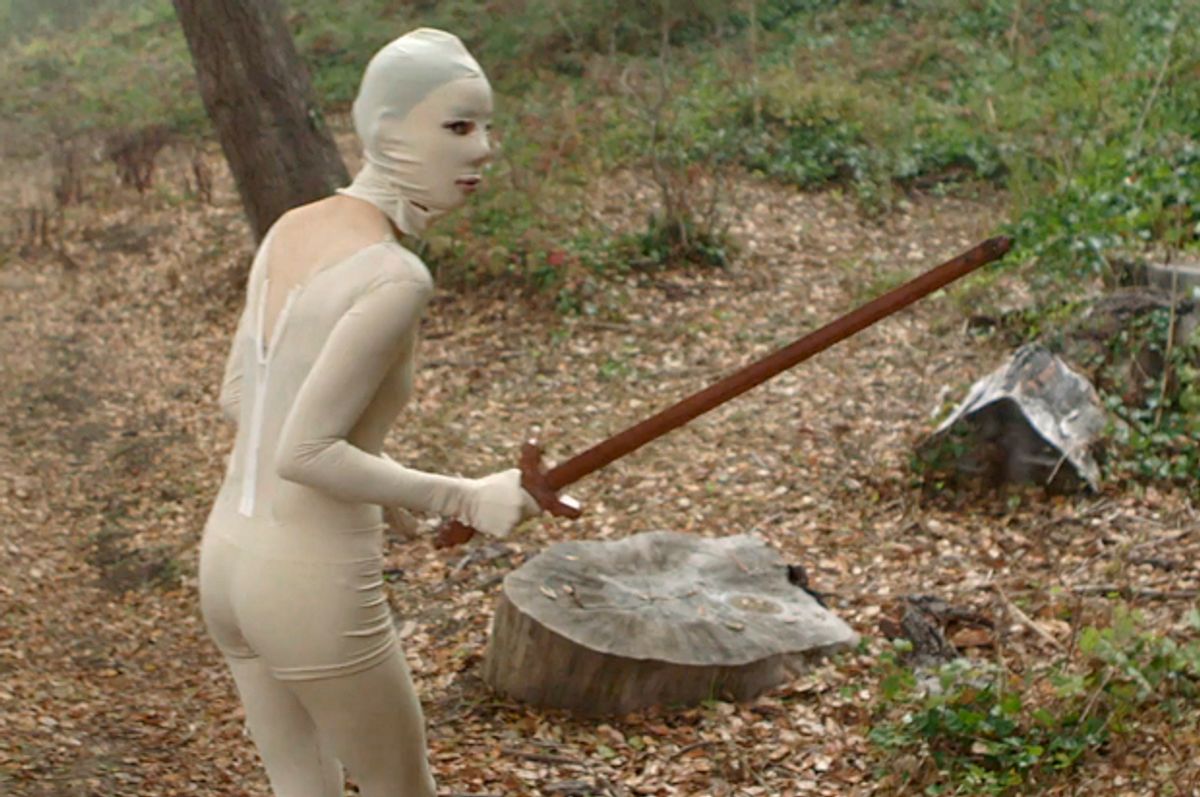 In its own strange way, the tiny, mysterious and occasionally terrifying indie film “Felt” captures the confusion of this moment in gender relations, and especially the confusion around the term “rape culture.” It took courage to make this disturbing little movie, which is both a zero-budget contemporary update on the rape-revenge thriller and something entirely different and more ambiguous. ("Felt" would make a deeply bewildering but oddly perfect double-bill companion to Seth MacFarlane's "Ted 2," which also involves sexual confusion and nightmarish costumes.) I don’t just mean that it was brave of co-writer and lead actress Amy Everson to draw on her own life experience (as she has said) to create this portrait of a traumatized young woman who retreats into an invented world that lies somewhere between art therapy and mental breakdown. No doubt that’s true, but as viewers we can’t possibly know what parts of a film are autobiographical and what parts are invented, and it doesn’t much matter.

Where the deeper bravery of “Felt” lies is that Everson and director Jason Banker never flinch from the inherent ambiguity and subjectivity of their story – which, by the way, are the same things that make sexual assault, rape and “rape culture” so difficult to talk about. This movie may well function as a sort of Rorschach blot, and while I’m sure it’s not universally true that women will understand it one way and men another, some gender division is almost inevitable.

At the most direct level, we literally don’t know why Amy, the wry, attractive but profoundly depressed 20-something California artist played by Everson, is so messed up. (All the actors in this movie play characters who share their real-world first names.) Sure, Amy’s predicament suggests or implies that she is a survivor of rape or some other form of sexual assault. And the movie drops a few hints about what may have happened to her, as in an edgy conversation about “roofies,” the date-rape drug, partway through a botched blind date with a blond surfer type. (Tips for guys: Perhaps date rape is not the ideal first-date conversation topic!)

But Amy never tells her story in the movie, and we simply don’t know. We can choose to believe that she endured some truly horrific form of assault, or that something inappropriate but less dramatic occurred that has affected her deeply. Or that she has a fragile ego and got dumped by some guy and has badly lost the plot, or even that she’s just kind of a nutjob who is channeling general cultural anxiety. Stuff happens, and how we read Amy’s history is entirely on us. What we can see is that Amy creates disturbing little doll-dioramas with a running theme of sexual violence, that she sometimes retreats into the woods to costume herself as a stubbly guy with an enormous schlong, and that her view of her own body and female sexuality in general is extremely damaged.

Banker shot “Felt” himself on locations in both San Francisco and Los Angeles – it’s as if Amy is so disoriented she’s not quite sure what city she lives in – and remains tightly focused on Amy’s withdrawn state and her relationships with the two female friends who try to drag her out of her funk. That’s also an intriguing and underplayed plot element, in that both of these supposedly functional women, Amy’s roommate Elizabeth (Elizabeth Twaits) and a model-artist-hipster type named Roxanne (Roxanne Lauren Knouse) whom Amy meets on a quasi-pornographic photo shoot, are more messed up than they appear. Elizabeth is dating a flaming corporate jerkwad who treats her terribly, as Amy correctly observes, while Roxanne is contemptuous of any and all men and immediately dedicates herself to splitting up Amy and Kenny (indie director Kentucker Audley), the seemingly kind and decent guy who shows up in the final act of “Felt.”

Roxanne may or may not be correct to mistrust Kenny, but the point Banker and Everson are making is that whatever has destabilized the lives of these three women – and whatever is driving Amy toward a violent rupture with so-called reality – has already happened and is all around us, like an atmospheric phenomenon. Some viewers will no doubt find “Felt” maddening because it never answers seemingly crucial plot questions that a normal movie or TV show would feel compelled to clear up. That ambiguity is precisely the source of its power, and its cinematic quality. Whether or not Amy is crazy, and whether her behavior is justified, are the wrong questions in any case. Whether the contemporary state of North American heterosexual relations is crazy, and how to begin to unpack or untangle that, is much more difficult to confront.

“Felt” is now playing at the IFC Center in New York and the Sundance Sunset Cinema in Los Angeles. It opens July 1 in Columbus, Ohio; July 10 in Atlanta, Detroit, Pittsburgh, Salem, Mass., San Diego, San Francisco and Seattle; July 11 in Houston; July 14 in Albuquerque, N.M.; and July 17 in Denver, Phoenix, Austin, Texas, and Ottawa, Canada, with other cities and VOD to follow.