America is changing, and marriage equality is a huge victory -- but we need to go so much further

It wasn't judges or politicians who made this breakthrough happen -- it was the people. Now we must demand more 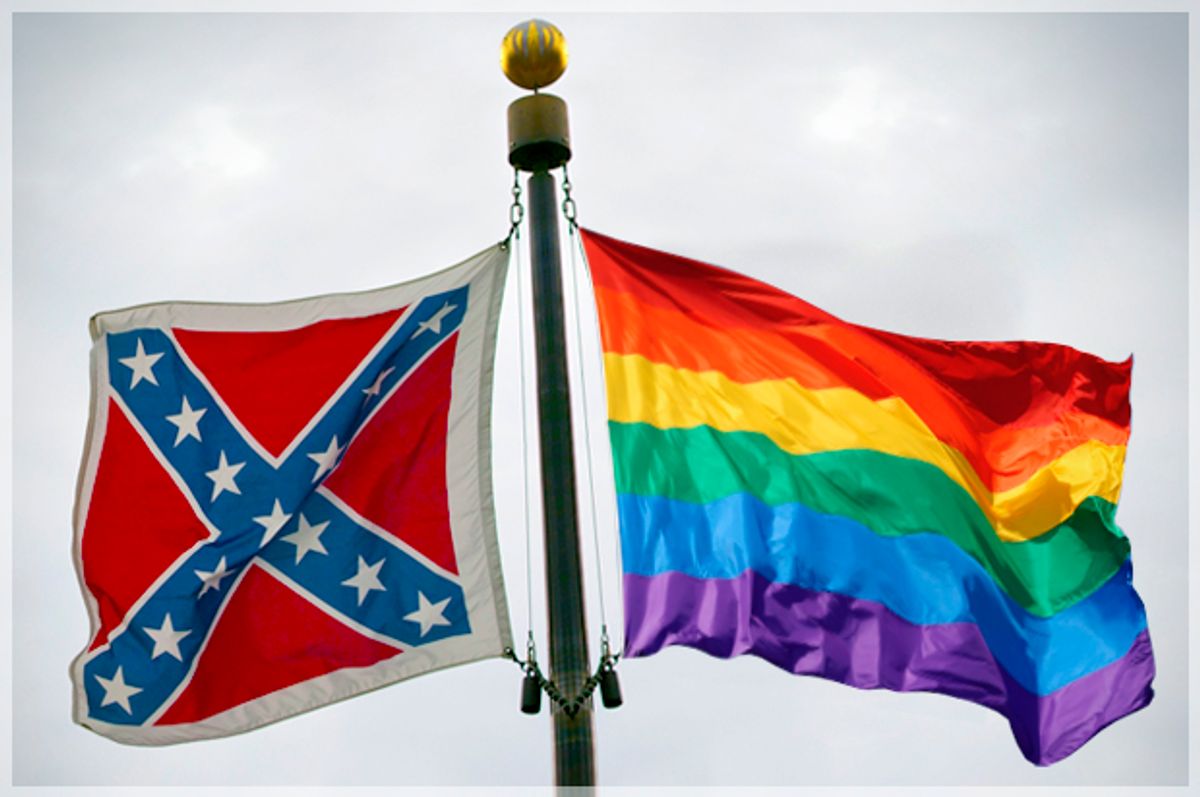 We’re still a week away from America’s 239th birthday, but from the redwood forests to the Gulfstream waters, from West Hollywood to West Texas, the party has begun for real. If the celebration of Friday’s history-shaping Supreme Court decision on marriage equality comes with an inevitable asterisk, because we live in a divided and ambivalent and deeply weird country, there is still plenty to celebrate and we shouldn’t miss the chance. We really have come a long way, baby, at least in terms of the expanding definition of legal equality and even more so in terms of shifting public consciousness. In different ways, the landmark marriage decision and white America’s moment of reckoning with the Confederate flag testify to those changes.

An entire strain of right-wing commentators, exemplified by Ann Coulter and Bill O’Reilly, have built careers on casting the left as treasonous America-haters who piss on the flag at every opportunity. This is a moment for people who believe in social justice to accentuate the positive, for damn sure. Beyond that, it’s also a moment that makes clear who really hates America – who hates the democratic and egalitarian potential of America, the America that does not quite exist but is struggling to become real. The America that the Coulter-O’Reilly caste claims to love does not exist either, but it never did and never will; it’s not just 1954 but a thoroughly fictional version of 1954, in which women and African-Americans were content to live in subjugation and Latinos, Muslims and LGBT people were invisible.

I know it’s tempting to feel Schadenfreude at the spectacle of so many right-wing troglodytes marinating in bile and bitterness, in Antonin Scalia’s outraged legalistic rhetoric (seemingly beamed in from 1938) or Mike Huckabee’s call to resist “judicial tyranny” or Rick Santorum’s tone of wounded bathos. I’ve had those moments; on Friday afternoon I sat amid a diverse crowd of economy-class passengers in the Miami airport, watching CNN and gasping in collective disbelief as one hateful Republican tweet after another crawled across the screen. But ultimately there’s no joy to be found, for any of us, in conservative agony and bewilderment.

It’s essentially tragic that so many people feel themselves under attack from the expanded application of basic principles of fairness and justice. It cannot be a good thing that millions of Americans are so imprisoned by toxic ideology that they are unable to share in this collective celebration of hope and happiness, that they seem so determined to wall themselves up in mental ghettoes of intolerance, and that they seem devoted to waging endless rearguard combat in defense of “traditional values” rooted in a constricted understanding of God and the Christian faith and America. As the congregants of Emanuel African Methodist Episcopal Church told us a week ago in such moving and memorable fashion, love is stronger than hate. Many people in our country who call themselves Christians would do well to reflect on that.

This week’s Supreme Court decision captured an enormous shift in American mores and attitudes – and an enormous defeat for Christian conservatives – and inscribed it into law, presumably forever. But that shift, and that defeat, had already happened. Huckabee and Santorum and Bobby Jindal and the rest of the 2016 GOP dudebro party massacre are crying over spilt milk, something that only Jeb Bush, with his phalanx of strategists and his Bushian instinct for the shifting tides, seems to grasp. (Jeb’s Lewis Carroll-like message, here and everywhere else, is that he’s both for and against gay marriage, or perhaps the other way around.) Conservatives had drastically overplayed their hand in state after state, passing constitutional amendments to ban same-sex marriage in precisely the same historical period when middle America was getting cozy with Ellen DeGeneres and “Modern Family” and the lesbian or gay couple who moved in down the block and had kids and turned out to just about as interesting and/or irritating as everybody else.

Those of us outside the LGBT community cannot entirely comprehend the range of emotions being felt and expressed at this moment, a moment that many people thought they would never live to see and that arrived with startling speed. But we all get to share in the celebration, because this is not just a victory for the LGBT movement or social justice activists or the left, although those people labored long and hard to get us here. It’s a victory for the American people, and one that left our so-called political leaders gasping in the dust.

For many straight people who have spent their lives in gay-friendly urban communities and grown accustomed to speaking cautiously about such things at Thanksgiving dinners and family reunions, the cultural shift looks almost as astonishing. Homophobic ignorance gave way to curiosity and question-asking and then to widespread acceptance so rapidly that it wasn’t just conservative Republicans who got bulldozed. Three or four years ago, Barack Obama and Hillary Clinton would have looked you in the eye with apparent sincerity and professed a deep personal conviction that marriage was for one man and one woman, and that civil unions were enough to secure the legal rights of LGBT citizens.

Listen, I heard Obama lead the choir in “Amazing Grace” during his Charleston eulogy on Friday, and I was moved too. He is using his lame-duck period to provide moral leadership on a number of difficult issues and that’s great. But on marriage equality we are not talking Profiles in Courage here, people. We’re talking a long-term position that was pretty much “separate but equal,” and that amounted to asking what was so bad about the “Colored” water fountain. I mean, it gave you water when you were thirsty, right?

It definitely wasn’t Obama or Clinton or anyone else in the mainstream liberal leadership of the Democratic Party who made this happen. They didn’t do shit, to put it bluntly. Red-state conservatives did much more to make this party weekend possible, I would argue, by viewing the Tea Party victory in the 2010 midterms as a popular mandate (rather than an expression of widespread apathy and dissatisfaction) and pushing an agenda of exclusion and intolerance that struck many ordinary Americans, who hadn’t previously been all that interested in “the gays” and what they did or didn’t do, as mean-spirited and unfair.

Which brings us back to the asterisk attached to America’s big birthday bash this year. Our country took a huge step forward this week in awarding full citizenship rights to gay and lesbian couples. In the wake of the shocking massacre in Charleston and the series of killings of unarmed black men that sparked the Black Lives Matter movement, we are in the early stages of a painful but overdue discussion about enduring racial injustice, gun violence and law enforcement. While the Confederate battle flag is only a symbol, the pain it has caused and the evil it represents are all too real. If even the white South is beginning to understand that, 150 years after the defeat of their great-great-grandfathers’ treasonous breakaway republic based on human slavery and white supremacy – perhaps the worst cause “for which a people ever fought,” as Ulysses S. Grant put it, “and one for which there was the least excuse” – well, what can you say? Welcome back from Bizarro World, guys, and yeah you can still play Skynyrd loud and drink Jack-and-Cokes and shoot up the stop signs at night and maybe we can all move on.

So Americans are not universally averse to facing the tough questions or looking toward the future without too much delusion or denial. But outside the realm of domestic social policy, many important questions – the ones about economic power and inequality, about a political system held captive by Wall Street banks and big corporations, about our policy of endless war and our global role as supercop and superspy – are rarely discussed and largely hidden from us. The Republican agenda is to push backward on social issues, or failing that to finesse them and retreat to a new bulwark, such as “religious freedom,” while deflecting any serious conversation about economic inequality, military power and the national-security state. The Democratic agenda is to push cautiously forward on social issues (some distance behind public opinion, to be sure), while deflecting any serious conversation about that other stuff. I don’t claim that the two approaches are identical or that one is not preferable to the other, but neither is remotely adequate to our situation.

Occupy Wall Street opened a window of opportunity for some of that larger conversation, for just a moment, and so did Edward Snowden. Both were universally derided, depicted as freaks and thrust to the margins, pretty much the same way as the “rioters” were who resisted a police raid on the Stonewall Inn in the summer of 1969, at the dawn of the LGBT activist movement. (The first Pride marches followed, exactly a year later.)

Change is possible: We can see that now, and it’s important not to forget that and slide back into apathy and perceived powerlessness. Change can happen when it is created through collective action and popular will: change of hearts and minds, of laws and institutions. Change, as we have seen in a long process that culminated this week, can be driven by love, a force always stronger than hate. But it will not be given. It must be made, and some kinds of change – the ones that the ruling oligarchy is determined to prevent – are a lot harder to make than others. In this moment of joyful celebration, do we dare to demand more? Can we find the love and strength to remake our nation?