Elegy for the Governator: "Old, but not obsolete" Arnold takes on a killer app in the bewildering time-travel paradox of “Terminator Genisys” 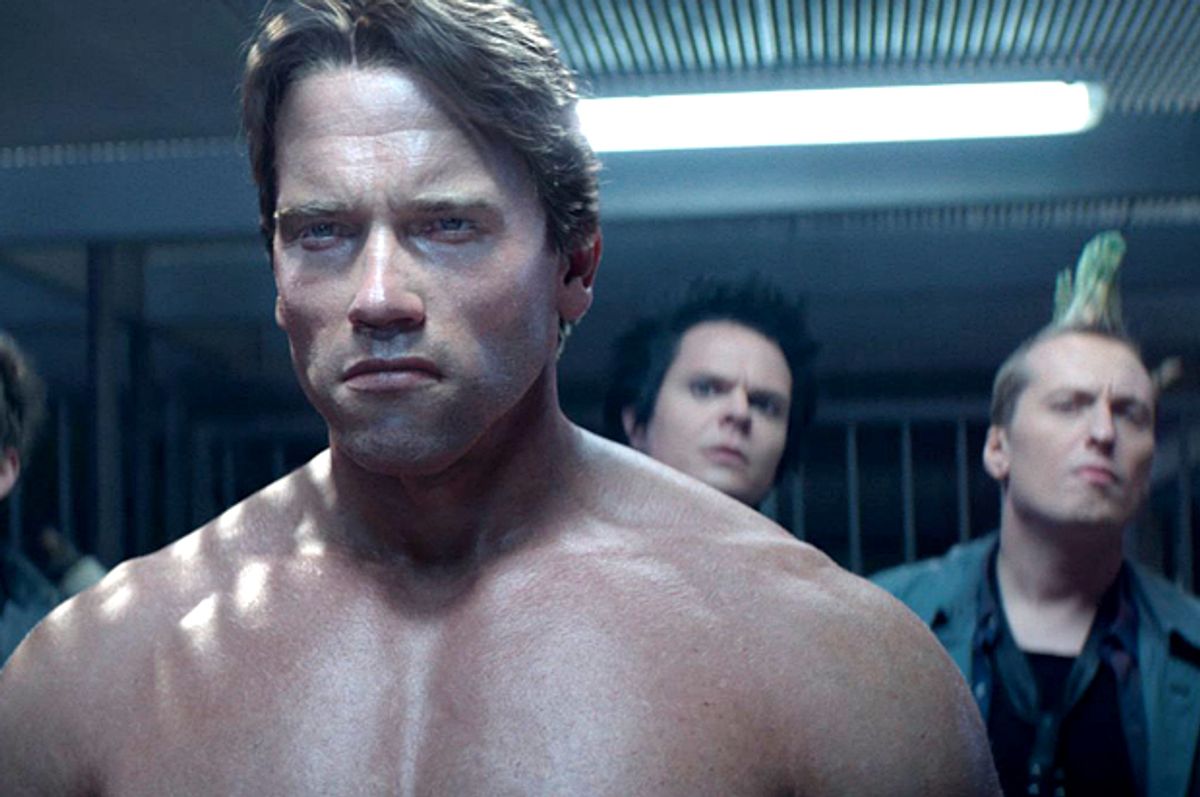 In “Terminator Genisys,” which I guess must be described (God help us) as an “alternate-universe reboot” of the sci-fi action franchise launched by James Cameron 31 years ago, some digital wizardry is wrought so that we see Arnold Schwarzenegger’s eponymous cyborg land in Los Angeles in 1984. He looks approximately like the old (i.e., young) Ahh-nold, and not so much like the leather-jacketed antihero of Cameron’s first film as the bulging, sleek, poofily coiffed bodybuilder of “Stay Hungry” and “Pumping Iron.” Or rather, he looks like a model of the young Arnold sculpted in plasticine and brought to life, which serves as a decent analogy for this entire movie, a confusing and expensive jumble of recycled parts.

It’s hard to say whether that spectral visitation from a lost pop-culture icon is more wistful or more creepy, especially set against the wizened, weatherbeaten and visibly smaller Schwarzenegger we see later in the film. If we’re time-traveling to L.A. in ’84, I don’t want to watch Arnold beat up “punk rockers” (who look to be about 38 years old) in Griffith Park! I want to wander off that hilltop and go see who’s playing at the Whisky that night, or visit the now-vanished Tower Records on Hollywood Boulevard. Not to be, of course, but the attraction of “Terminator Genisys” (which was directed by TV veteran Alan Taylor, from a screenplay by Laeta Kalogridis and Patrick Lussier), lies in the fact that it conjures up associations that are more powerful than the movie itself.

Taylor spreads elaborate action set-pieces throughout the film at appropriate intervals, as dictated by the Nolan-Bay law of current Hollywood cinema: It isn’t a real movie unless at least one American city is entirely destroyed. These are competently executed but often feel like digital copies of scenes delivered more effectively in other films. If you want pure mayhem, “San Andreas” and “Godzilla” and "Dawn of the Planet of the Apes" and even the crack overdose of Bay's next-to-last “Transformers” movie are better choices. You can only blow up the Golden Gate Bridge so many times before we just stop noticing or caring; it’s like listening to your right-wing uncle raging about Hillary Clinton. In fact, the ultra-tangled plotline of “Terminator Genisys” makes the rhythm of the action beats especially weird; we see the entire world nuked into rubble by the machine overlords really early in the movie, which makes it hard to get excited about a few buildings falling down later on.

You would need some kind of flowchart to make sense of who is good and who’s evil in the competing timelines of Kalogridis and Lussier’s screenplay, but I genuinely don’t think it’s worth it. Kyle Reese (played by aspiring Aussie hunk-star Jai Courtney), the purported hero of this movie, is an idiot in all possible universes, and if there are fans out there who genuinely care about the internal machinery of the “Terminator” franchise, they’re going to wish they could forget the role this profoundly irritating dude plays in the story. That is – yeesh -- in this particular telling of the story, in which Kyle gets sent back in time by John Connor (Jason Clarke), leader of the anti-machine resistance, to save John’s mom Sarah (the character formerly played by Linda Hamilton, among others, and here by British actress Emilia Clarke) from the killer cyborgs, only to discover that the timeline has been altered and Sarah already knows all this stuff and stop me if you’ve heard this one before.

But the point of all the doleful pinballing back and forth between 2029 and 1984 and 2017 in “Genisys” (a visit to 1997 is threatened but sadly does not occur), if “point” is the right word, is not the nonsensical narrative but the governing mood of intermingled nostalgia for the lost past and the lost future. Or the governating mood, shall we say, of pseudo-Proustian elegy and celebration for the 67-year-old retired Republican politician who is the real main attraction. Age and apparent cosmetic surgery haven’t improved Schwarzenegger’s acting, and his physical presence has diminished. But he has learned how to extract maximum impact from doing nothing, and of course this character (in the quasi-present of 2017) has lived among human beings for 30 years without being one of them.

There are flashes of late Clint Eastwood or Richard Gere performances in Schwarzenegger’s better moments; he’s a lonely old cyborg lost in the 21st century, a stoical working-class dude with a panel truck who gets the shakes sometimes but can still take a punch. In this particular timeline, he raised Sarah from the age of 9, robotic single-dad style, and she calls him Pops. “Old, but not obsolete,” Pops growls at Kyle, who mistrusts him and is unhappy that Sarah is full of spunk and sass and knows how to handle automatic weapons instead of an ignorant and fragile flower. Feminist attitudes, at least among men, seem to have been wiped out by the rise of the machines – and don’t say that Sean Hannity and Rush Limbaugh didn’t see that coming!

There’s a plot twist involving Kyle and Sarah’s unexpected 21st-century encounter with John Connor that I’m not supposed to tell you about, even though Paramount Pictures delivered a massive spoiler in a trailer that has now been viewed by millions. Let’s just observe that Jason Clarke can never play a character who is not tormented, especially not after waterboarding that guy in “Zero Dark Thirty,” and add that Oscar winner J.K. Simmons gets a nice scene or two as an L.A. cop turned conspiracy theorist who’s on the time-travelers’ trail. While the movie addresses the fact that the adult Kyle who went back to 1984 and then forward to 2017 now intersects with a version of himself at age 13 or so, no one ever mentions the possibility that Clarke’s 20-something, time-traveling Sarah Connor might run into her “real” counterpart, who by my count would be 53 years old. Because that’s disturbing and not all that hot, am I right?

In the timeline of “Terminator Genisys” the 1997 nuclear disaster of the first “Terminator” franchise has been replaced by a killer app, ha ha. Except no, I’m not kidding: In the near future some demonic machine-enslaved blend of Apple, Google, Microsoft and the NSA will link your car to your washing machine to your phone to your brain and that’s all she wrote. It’s hard to outline all the ways in which that’s a dopey version of apocalypse, not to mention one already left behind by reality and not likely to be undone by a trio of numbskulls from the past and/or the future.

Along the way to uploading ourselves into eternity, we watch Schwarzenegger and his stunt doubles get flung through windows, doors, walls and railings by a succession of newer, tougher and more evolved Terminators. It’s repetitious, and even a little upsetting. What do we want from this guy, after all this time? And what does he want from us? One could say that he tried to save the Republican Party from itself, which was a quixotic endeavor to be sure. He returned from that misadventure – he kept promising us he’d be back! – and has now rejoined the struggle to save the human race from robot genocide. That probably won’t work either, but it’s less obviously doomed and foolish.