"Magic Mike XXL" sets us free: This vulgar and delicious fable of liberation is the perfect summer movie for 2015

Back on the road and freed from hetero norms, the Kings of Tampa deliver a pro-queer, pro-feminist ode to joy 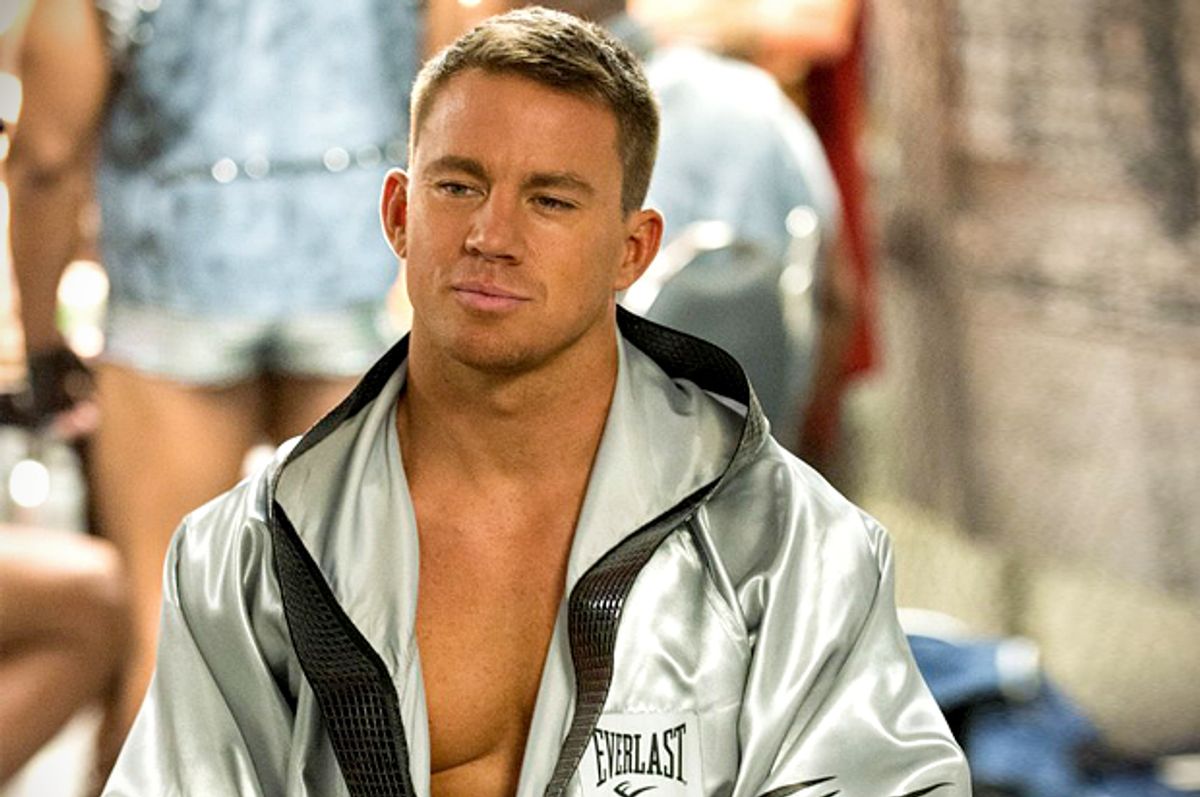 Steven Soderbergh’s “Magic Mike,” the oiled-up beefcake summer surprise of 2012, was a surprisingly moralistic movie, despite its crotch-pumping dance numbers and its meticulous depiction of the social world of Greater Tampa-St. Pete male strippers. To be specific, it was the fairytale about the princess who kisses a frog – a frog with an unbelievable six-pack, wearing a fake cop uniform over a leather thong – and restores him to humanity with the power of love. “Magic Mike XXL,” the surprisingly delicious sequel directed by Gregory Jacobs, Soderbergh’s longtime assistant, turns that morality fable on its head: The storybook princess is long gone, and the frog gets back in touch with his true frog identity, and starts thinking about kissing other frogs instead of princesses.

No, wait, hang on: I’m not telling you that Magic Mike, the “male entertainer” with the insouciant, three-quarters-backward baseball cap and the remarkable physique played by Channing Tatum in these movies, comes out as gay or anything. Actually, the issue is much bigger than that. Mind you, if Mike were gay – and I’m aware of the predominant theory that that was the deal with Dallas, Matthew McConaughey’s tormented ringleader in “Magic Mike” – his fellow travelers in the Kings of Tampa would be down with it. That wouldn’t be the weirdest thing they’ve dealt with, by a long shot. They love Mike for who he is, that being an iron-body stud with a boyish demeanor and killer dance movies who can make it rain estrogen-soaked dollar bills, not for who he loves.

I think it’s legitimate to raise questions, after two films, about the cagey attitude toward male sexuality in the “Magic Mike” franchise. I don’t think it’s some huge or shocking secret that a fair number of male strippers are gay or bisexual men, and the issue never directly comes up in either of these movies. Screenwriter Reid Carolin apparently contends he didn’t encounter many out gay men amid the Florida beach-resort stripper scene, which may be true. But the total avoidance of homosexuality really stands out in “Magic Mike XXL,” which in so many respects is a joyous, candy-colored, penis-flavored ode to liberation.

This isn’t a perfect movie, but it might be the perfect summer movie for 2015, a celebration of American fluidity and vulgarity that explores the shifting boundaries of sex, gender, race, good taste and appropriate behavior and dumps the heteronormative mores of the first movie out the back gate of the roach coach, to sleep off its rum-and-tequila hangover on Jacksonville Beach. Freed from his monogamous relationship and his thankless day job as a struggling contractor, Mike hits the road with the Kings of Tampa one last time. Dallas has disappeared on them, and the guys want to go out with one last hurrah, sort of like an aging rock band facing the end of the road and the onset of middle-aged normalcy, except without pants.

But “Magic Mike XXL” is much more a story about a new beginning than about an ending, and in all seriousness, I don’t think it’s going too far to see a larger social analogy. (Bearing in mind that I am the movie critic who sees a larger social analogy in everything.) We’re trying to push the reset button on a whole bunch of stuff in American culture, and if that button happens to be located inside Channing Tatum’s skivvies, well so much the better. On Mike’s first night of liberty the Kings spend the evening in a gay bar, voguing outrageously in a drag contest. It won’t surprise anybody that Tatum has some highly evolved moves in that department, but even Tarzan, the hirsute, ultra-macho stripper played by onetime pro wrestler Kevin Nash, turns out to have unexpected gender-bender talents.

I think the way to put it – if I can even use this terminology without getting in trouble – is that “Magic Mike XXL” may not be a gay movie, but it’s a queer movie down to its soul, in the fullest and most capacious sense. It continuously and obviously validates female sexual desire, but also women’s desire to be seen, heard and acknowledged, as well as touched. The closest Mike gets to a conventional love interest in this movie is Zoe, an artsy stripper-photographer type played by Amber Heard. Zoe is theoretically on her way to New York but is happy to flirt with him along the way, while insisting she’s “not in a guy phase.” One of their hesitant conversations takes place in the kitchen of a gigantic Southern mansion, while in the living room a middle-aged divorcee played by Andie MacDowell makes, shall we say, a more tangible connection with Big Dick Richie (Joe Manganiello), Mike’s legendarily-endowed teammate.

While the apparent culmination of “Magic Mike XXL,” and the Kings of Tampa’s entire road trip, is their showcase performance before several thousand screaming women at the annual stripper convention in Myrtle Beach, South Carolina (the world capital of a certain grade of sub-middlebrow vulgarity only describable as Myrtle Beach-ness), from my perspective the journey is a lot more important than the destination. Nothing in this movie is as playful or as loaded with pure cinematic and physical pleasure as the scene in which Big Dick accepts a dare from the other Kings: Make a surly convenience-store worker smile by improvising a sultry dance number to the Backstreet Boys’ “I Want It That Way,” aided only by a bottle of water and a bag of Cheetos. (The danger of getting that insanely catchy hit song from 1999 stuck in your head for days afterward is very real.)

And then there’s the movie’s fascinating side trip into American race relations, which both plays with deep-seated stereotypes and circumnavigates them. Mike turns out to have some heavy history with a silky-smooth African-American entrepreneur named Rome (Jada Pinkett Smith), who runs a swanky private club on the outskirts of Savannah that caters to the erotic needs of black women. Rome’s performers include NFL star turned TV-talk host Michael Strahan, who serves the clientele in one direction, and “Community” star Donald Glover as an ultra-sincere young rapper whose job is to make the wallflowers and shy girls and recent jiltees feel not just special and included but worshipped. Some of Rome’s longtime patrons may remember Mike, it appears, from the days when he performed there as “White Chocolate.”

Soderbergh’s “Magic Mike” carried the faint but unmistakable flavor of moral disapproval: The world of Mike and Big Dick and Tarzan and New Age seeker Ken (Matt Bomer) and endlessly easygoing Tito (Adam Rodriguez) was a constructed illusion, and amid all the women, the ridiculous fireman costumes and the “tsunami of dollar bills,” they would not find happiness. “Magic Mike XXL” may not be as well constructed; there are lags and dull patches, and it lacks the magnetic McConaughey as its enigmatic centerpiece. (No cameo, no nothing.) But it asks far more radical questions, like what the hell we mean by “happiness,” or even “reality.” Aren’t those the things we create, moment by moment, through living our lives? And isn’t there something to be said – or everything to be said – for having fun and seeking to bring pleasure and delight to others and acknowledging that desire is a strange and wonderful thing and we never quite know where it’s going to lead us? Sure, at some point Mike and his buddies will probably have to face mortgages and rent and taxes and all that stuff. But for too much of recent human history we have fetishized the commandment to follow the rules and conform to the codes, and forgotten the one about loving each other.