"Wrecking Ball" made me drool, no matter what my kids and husband thought. I was a sexed-up Madonna fan once more 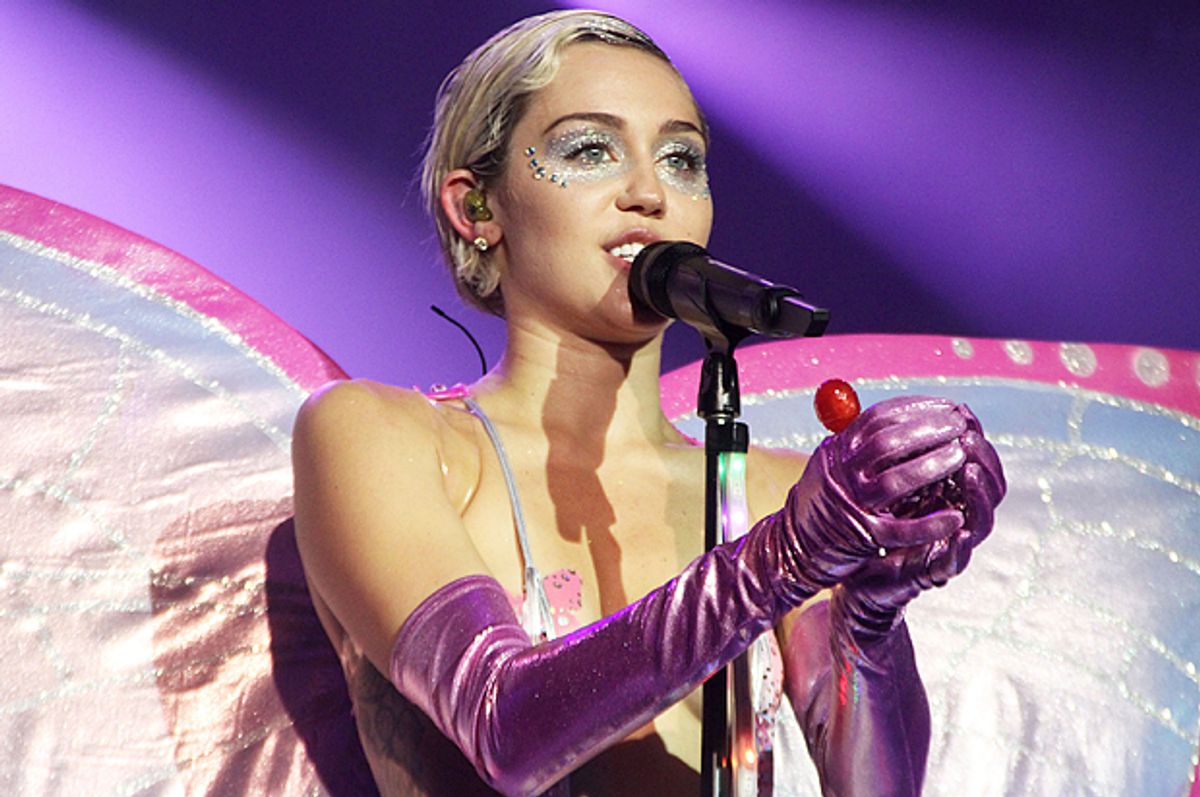 Excerpted from "Here She Comes Now: Women in Music Who Have Changed Our Lives"

Dear Madonna,
I will fuck you if you want.

At least once a week, my husband will turn on the car and Air Supply, Whitney Houston, Peter Cetera, or Mariah Carey will pour out of the speakers. There is only one person in the house to blame.

There is something seriously wrong with you.

My husband thinks we have a bit of a parenting crisis on our hands. He believes our kids need a crash course in good music.

Like yesterday. Fine. This can be his job. For me, music has always been more escapist than cerebral. I’m borderline snobby when it comes to abstract expressionism and French cheese, but with music, I’m unapologetically mainstream.

Like every single episode of "Parenthood" or all of the Nancy Drew books, music enters my body at an easy-listening frequency. There’s a satisfying build, the requisite yanking of my heartstrings, and then bam, I’m mainlined with pure emotion. I rarely listen to lyrics. In fact, most music misses my brain entirely.

We clawed, we chained, our hearts in vain
We jumped, never asking why
We kissed, I fell under your spell
A love no one could deny

I am on the edge of my desk chair watching Miley Cyrus’ video for “Wrecking Ball.”

I came in like a wrecking ball
I never hit so hard in love
All I wanted was to break your walls
All you ever did was break me
Yeah, you wreck me

I want my twenty-year-old breasts back, Miley.

My desk is in the hallway. Six years ago, this was a strategic move.

And by the way, why exactly are you licking a mallet?

I was able to write and still keep an eye on my 1-year-old son while he upended the living room.

Who fucked you over, Miley?

Or I could bolt up just in time as he tried to climb out the window.

You didn’t really need to get naked, did you? I just worry about my daughter. Will she think she needs to get all sexytown in order to accomplish anything? Because that’s hella fucked up.

One room removed from parenting. A mini vacation.

I love pubic hair. Yours is basically gone. Please help me understand. Don’t you want to look like a woman?

But now my desk feels like Grand Central. A husband or a child or dog is always sneaking up behind me.

My daughter’s eyes get big. I quickly close the browser window.

What’s that you’re watching, Mom? Why isn’t she wearing any clothes?

I’m a fairly chill mother. But I have my limits. Watching Hannah Montana rub her inner thighs and roll around in bashed-up cinder blocks is just not appropriate for my 11-year-old daughter. It’s barely appropriate for me.

I’m mesmerized. The white tank. The combat boots. The aggressively mascaraed, neon-blue eyes. That little bit of springy saliva. The perky pre-breast-feeding breasts. The power. The destruction. The tears. The youth. The breasts. The breasts. The tight ass. The breasts. Did I mention I’m perimenopausal and certain times of the month anything will turn me on because my body is in overdrive saying make one more baby before all of your eggs are dead and gone just one more baby please. Even Miley Cyrus’ landing-stripped pussy can rile me up.

I go underground with my Miley. To protect my sanity. To protect my children. No more watching. I only listen with my headphones. Five times. Ten times. Then I just put it on YouTubeRepeat.com.

For three weeks straight, “Wrecking Ball” is my writing song. While I bang out the section in my book that examines young love and hormones and angst, I listen to Miley frothing at the mouth about how fucked up love is. No matter that she was born in 1992, the year I graduated from college.

Eleven years old. My body was just starting to wake up. All was heightened. In a matter of weeks, I went from being a voracious reader to a sullen dreamer. I would stare at the wall for hours. Volume down in my brain, volume up in my heart and vagina. I was so blindsided by hormonal shifts that I lost my appetite. I was 15 pounds underweight. I was shy. I was a wreck.

Despite some early "Joy of Sex"-inspired role-playing with other girls my age—let’s try this position, you pretend to be the woman, I’ll be the man, she sits on top facing away, one leg is stretched back, she arches her chest up and her head rests in her arm, like that, now bounce, wait, stop, that’s not right, let me get the book—my love for boys was clear as day. I just didn’t know what to do with them. And they didn’t know what to do with me.

First there was the 11-year-old who chased me with the scissors and showed his love by cutting off a chunk of my hair. His mother forced him to call and apologize. I did all of the talking. You cut my hair. What was that about? You. Cut. My. Hair. I don’t understand. Why? Silence.

And then there was the dreamy French boy with perfect curls and striped nautical shirts. Even after he punched me in the stomach, I still dreamed of kissing him at night.

And Guillaume. French again. During an afterschool session of Truth or Dare, he found out I was into him. He attacked hard by telling everyone I had a thing for a dork named Dirk. My sixth grade social life was ruined. Poor Dirk. Poor me.

P.E. class. Seventh grade. I was dancing with a group of friends and trying to catch the eye of a gangly, blond surfer dude. I pas-de- bourréed pas-de-bouréeed step-kicked jazz-melted to the ground thinking please look over here please this is all I’ve got I don’t know how to talk to you but I can do this. He didn’t glance up. Not even a quick peek.

As I got older, it just got harder. I wanted a boyfriend so badly that I felt the ache of a phantom heart. As if I had experienced love once but couldn’t seem to find it again. I was a throbbing bundle of heartbreak and I had never even held a boy’s hand. A hard-wired notion of where I should be on the romantic spreadsheet of life was so heavily reinforced from books and television shows and movies that I convinced myself there was something deficient in my girlness and I should be returned to sender.

For my teenage years, I perpetuated this unattainable fantasy by locking myself in a padded room of cheeseball love songs, Harlequin romances, and John Hughes movies. I had the Thompson Twins blasting through my head as I tried to daydream my true love into fruition. There he was on the other side of the street, à la "Sixteen Candles," wearing Levi’s and a sweater vest, leaning against his red sports car.

Me? I’d say, pointing to my heart.

The music I was listening to didn’t help. Corey Hart and his sunglasses at night, Lionel Richie and his hellos, Bryan Adams and his heaven, Michael Jackson and his crotch, Prince’s “Darling Nikki.” They all seem old and odd. They didn’t help me relax. I needed a guide.

I started listening more and more to Madonna. In her early days, there was an awkward old-school Hollywood veneer to her whole package. The diamonds-are-a-girl’s-best-friend of “Material Girl.” The pregnancy drama of “Papa Don’t Preach.” The bebop of “True Blue.” Not my stories. Not my groove. I couldn’t even get a boy to talk to me. What did I care about abortion and engagement rings? I didn’t know it yet, but Madonna was stirring something up inside of me. It was just a slow build.

In high school, friends tried to help me out.

Phyllis. You can get over your awkwardness with boys.

I was already turning red.

You can do it. You can say it. Penis. Say it. Peeeeennnnniiiissss.

Yes you can. I’m going to write it down. Phyllis. Just read the word.

Once you can say it, then maybe you can touch one. Pass me that banana. Let me show you.

Considering my epic list of hang-ups, I still managed to lose my virginity before going off to college. It was a two-minute affair, sponsored by Budweiser, with a soundtrack by John Cougar Mellencamp. I remember the cracks on the ceiling, the nicotine on his breath. But my heart and mind were closed. It was like prison.

I went off to the Juilliard School to study modern dance. I dated a series of actors. They came out of the box in four categories.

Then 1990 changed everything. It was a big year all around the world. Saddam Hussein invaded Kuwait. Nelson Mandela was released from prison. East and West Germany reunited. I turned 20. I saw Madonna’s “Cherish” video for the first time and I melted from the crown of my head down to my pelvic floor.

I gave up on straight men. I fell for gay men. They were so easy to love. I mothered them. They took me downtown to the Limelight and the Pyramid Club. They were so uninhibited with their bodies. With their words. So dirty and sassy and brave. We embodied Madonna. We moved. We breathed. We sweated. For the first time in my life, I didn’t care what anyone thought.

Two months later, I fell in love with a straight man. Like the shaking-all-over kind of love. The unhinged kind. The multiple orgasms kind. Ten years later, I married him. And while this man still doesn’t approve of my music choices, he remembers the moment we first met. On the dance floor. There I was. Dancing like a motherfucker to Madonna. Open, comfortable and free.

I only corrupt our children with bad music when he’s not around. What he doesn’t know won’t hurt him.

Mom. Can you change the song?

Dash, that is unacceptable.

What? Why? She doesn’t do that to you?

She makes me want to dance.

Come on. Sing with me. I was never satisfied with casual encounters—

Dash yawns. I yawn contagiously. We yawn together uncontrollably. I continue singing.

Mom. Come on. Hearts that bleed? Burning love? What?

Don’t listen to the lyrics, my love.

P.S. I just learned that Madonna never got my note. My friend Stanley saved it. It’s tucked away in his apartment in Williamsburg. He plans to give it to my children someday.

Excerpted from "Here She Comes Now: Women in Music Who Have Changed Our Lives" edited by Jeff Gordinier and Marc Weingarten. Published by Rare Bird Books, A Barnacle Book. Copyright 2015 by Phyllis Grant. Reprinted with permission of the publisher. All rights reserved.

Phyllis Grant's writing, photos, recipes, and parenting advice have been featured numerous places including including Oprah, The Huffington Post, Saveur, Williams-Sonoma, Food and Wine, Apartment Therapy, The New York Times, and The San Francisco Chronicle. She writes a column forFood52 called "Cooking What I Want" and is hard at work on a food memoir called This Dinner WIll Not Kill Them.