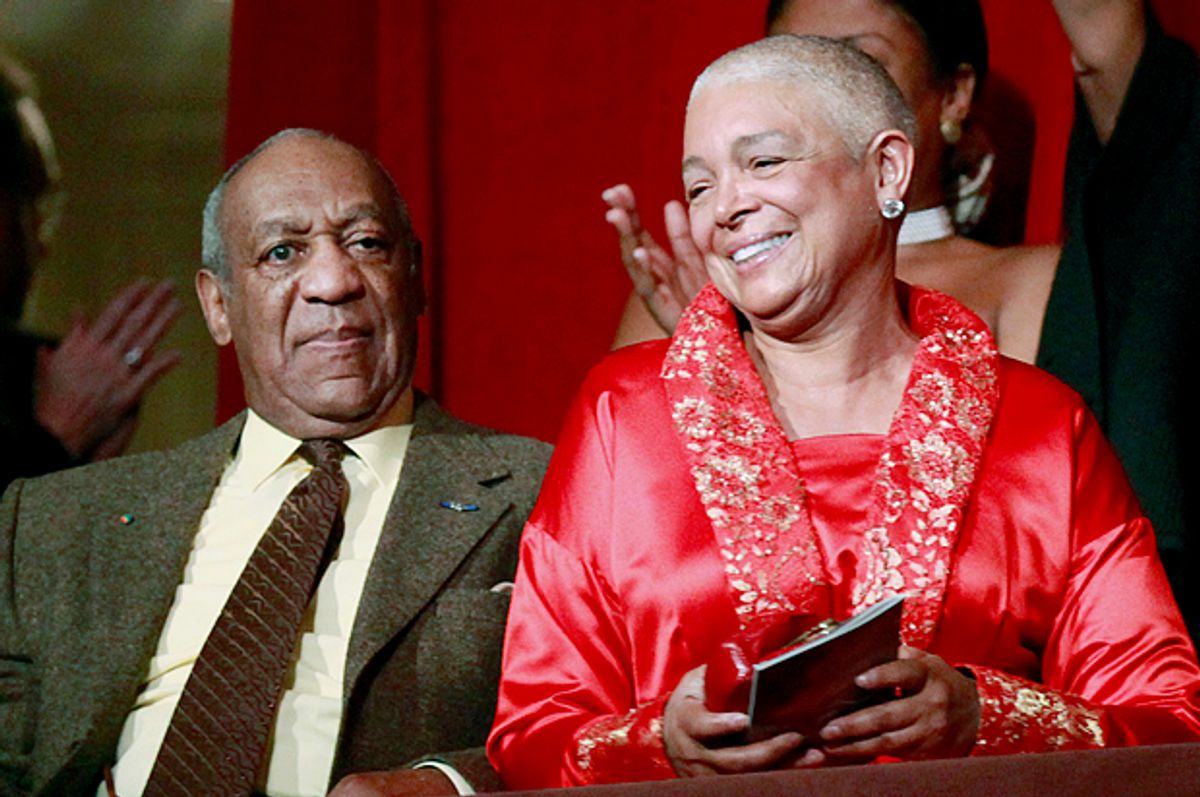 As the mountain of accusations and incriminating self disclosures around Bill Cosby grows ever larger, even longtime fans and supporters have lately been conspicuously distancing themselves from the beloved comedian/alleged serial rapist. Yet his most loyal devotee is still apparently sticking right by his side. Camille Cosby, what on earth can be going through your mind these days?

Cosby's wife of 51 years is steadfast — and outspoken — in her devotion. You'd think any woman would bail after the first dozen or so rape accusations, but not her. In December, she issued a statement to CBS News in which she compared the accusations against her spouse to the discredited Rolling Stone UVA story. And in it, she called her husband "a kind man, a generous man, a wonderful husband, father and friend," and boldly asked, "None of us will ever want to be in the position of attacking a victim. But the question should be asked -- who is the victim?" Earlier, during a November interview with the Associated Press, she sat coolly by her husband as he replied “No, no, we don’t answer that," when pressed about the rape accusations. No, we don't.

Even Cosby's most true blue fans by this point can acknowledge that their idol is not the cuddly pudding pitchman of his heyday image. It's been eighteen years since he acknowledged an affair — and paying $100,000 over two decades to keep it a secret — after the woman's daughter (whose paternity has never been definitively determined) attempted to extort more money from him. At the time, Camille serenely announced, "All old personal negative issues between Bill and me were resolved years ago. We are a united couple. What occurred 23 years ago is not important to me except for the current issue of extortion."

It's tempting to, as  Meghan Murphy wrote in Feminist Current last year, "blame the patriarchy" for Camille Cosby's epic devotion, to speculate, as she did, "I can’t help but feel bad for all women stuck in marriages with horrible men who have been socialized to 'stand by their man' no matter what." A woman who married before she even turned 20, who's lived her entire life in the shadow of a powerful and famous man — who could entirely blame her if her public loyalty were even in part a function of never learning how to be anything but Mrs. Bill Cosby? She is also a mother who's lost a child, (their son Ennis was murdered during a robbery in 1997) who told Oprah Winfrey in 2000 that she couldn't "imagine functioning without" the rest of her family.

But Camille Cosby doesn't appear to be motivated solely by emotion. She's a shrewd woman who went back to school to complete her education after she'd had five children. She's a producer and tough business manager. A 1988 Ebony feature on their touching Hollywood "Love Stories" alludes to the fact that "The couple's marriage has weathered the storms that confront most show business marriages, such as being apart frequently, public scrutiny and dealing with hangers-on." She's described within as "classy, reserved and stubborn, keeps tabs on the family's sizable investments. She also wields conservable influence on his professional decisions and is not apprehensive about voicing her opinion." And in it her husband admits, "People would rather deal with me than with Camille. She's rough to deal with when it comes to my business."

You don't spend over five decades with a person, raising children together, without putting in a huge investment. You don't live that long without experiencing authentic pain and grief. And you also don't live through all that time without getting a few clues regarding your partner's behavior. The contents of Camille Cosby's mind and heart are not for public consumption. But it would be simplistic to view her as a mere brainwashed pawn of a charismatic star. That's in some ways the real tragedy — that she's so smart and still so determined to put the blame for this unraveling anywhere but her husband. You can truly love your family and simultaneously want to protect the brand you've cultivated. Her whole adult life, she hasn't just been Bill Cosby's wife. She's been Bill Cosby's business. And right now, business is very, very bad.