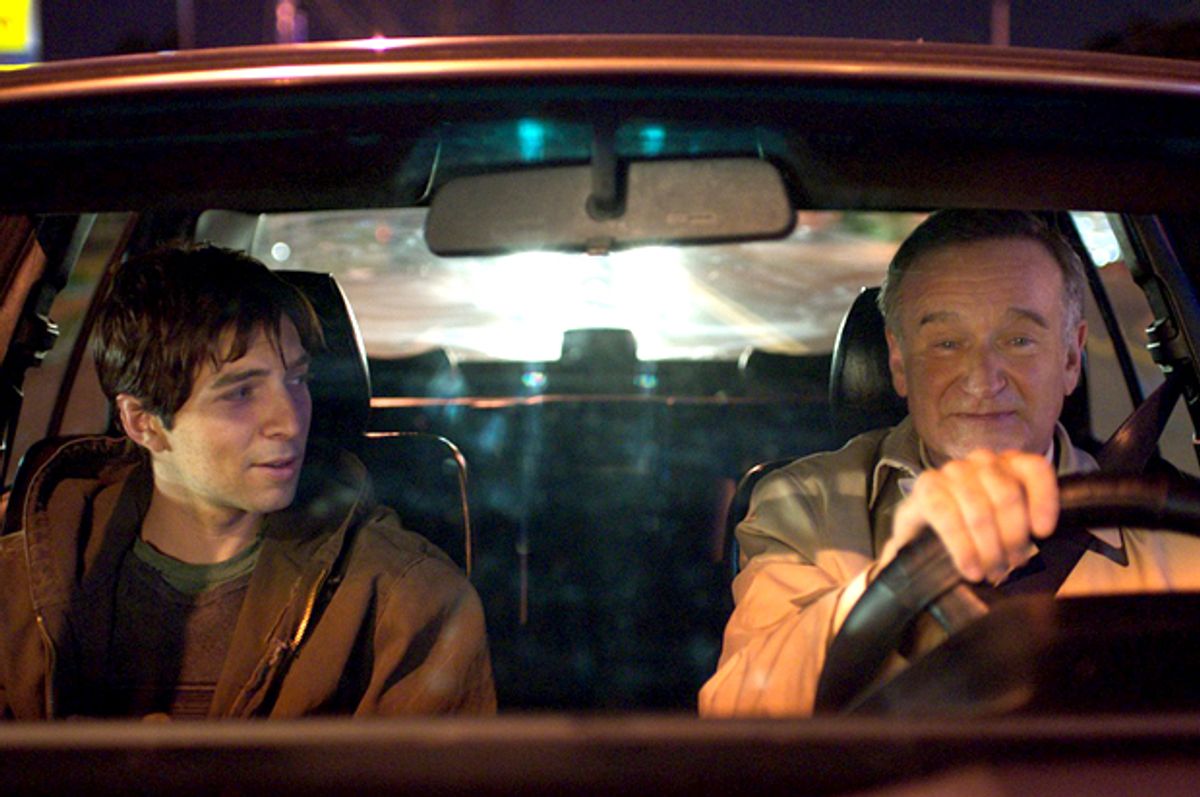 We should always resist the fallacy that we learn something essential about actors as human beings from the roles they play on-screen, but beneath that fallacy lies a thorny problem. When we see Robin Williams playing a depressed, repressed and profoundly lonely middle-aged banker, his face frozen into an agonized grimace meant to simulate cordiality, in director Dito Montiel’s modest indie “Boulevard,” the psychological undertow is almost overwhelming. Did Williams pick this grave, old-fashioned little marriage drama, the story of a closeted gay man pulled out of his shell by a relationship with a teenage hustler, as his final dramatic role? I mean, that’s objectively unlikely and we can never know. But in the bigger picture Williams had been playing versions of that guy for years. We aren’t reading pain and grief into his characters retroactively because he took his own life; they were always there.

Actors all frame this problem in different ways, but the relationship between performer and character is never zero. By its very nature acting is a combination of artifice and autobiography, modulated by a set of strategies known as “technique.” It might be more accurate to say that we learn something about George Clooney or Viola Davis as people through their performances, but we can’t be quite sure what that something is. Iconic movie actors often fall into two groups: the shape-shifters and chameleons, seemingly able to inhabit the mind, nerves and flesh of any other person (think Meryl Streep), and the “stars,” who turn every character into iterations of their own practiced personas (Brad Pitt).

Despite his long career in film, Williams was neither of those things. He won an Oscar (for his supporting role in “Good Will Hunting”), was nominated three other times and made millions of dollars in Hollywood, mostly for pictures he must have known were mediocre or worse. As I wrote after Williams’ death, the fact that he was paid $20 million to star in “Bicentennial Man” summarizes everything that went wrong with his career and American mainstream cinema over the last 20 years. He was never a perfect fit as a movie actor; he always seemed to be something bigger or something more or anyway something other than that. At the peak of Williams’ Hollywood stardom, he didn’t so much play characters as deliver his manic, stream-of-consciousness stand-up comedy persona, packaged within some kind of uplifting conventional dramedy.

After his box-office clout faded in the late ‘90s, Williams conspicuously turned toward low-budget indie dramas, repeatedly playing isolated and tormented American males in films like “One Hour Photo,” “The Night Listener” and “World’s Greatest Dad.” Even his misconceived cameo as Dwight Eisenhower in “The Butler” turned Ike into a weary, sad and misunderstood figure. What strikes me in retrospect is not the obvious differences between those phases of Williams’ movie career, but the similarities: Whether in mainstream farce or downbeat realism, he played the outsider, the misfit, the loner seeking a human connection he couldn’t get through normal channels.

If anything, “Boulevard” is the apotheosis of Williams’ later career, not an anomaly. I wish I could tell you it was a better and more satisfying film, but even its odd, strangled and almost antique quality – it plays out like a well-intentioned Sundance drama from about 1986 – feels curiously appropriate. I don’t presume to know how much of himself Williams saw in Nolan Mack, the 60-year-old assistant bank manager who has known he was gay since age 12 and never done anything about it, but I do know that Nolan is much weirder than he needed to be strictly for narrative purposes. He has the buttoned-down personal style and slicked-down hair of a suburban husband from 1959, as if to suggest he has lived his entire adult life without claiming it, in imitation of a model every other male in North America has happily abandoned.

Nolan has chosen long-term stagnation, probably because he fears the alternatives. He has slept in a separate room from his wife (Kathy Baker) for years, almost as long as he has sat behind his loan officer’s desk at a suburban bank branch, shoulders hunched in Bartleby the Scrivener style and nervous smile permanently pasted on his face. In the first scene of “Boulevard,” Nolan approves a mortgage for a young, interracial gay couple, showing no emotion toward the beaming lovers and no reaction to the homophobic cracks of his boss. That’s the first of many moments when Douglas Soesbe’s screenplay telegraphs its themes way too obviously, but there is never a moment in “Boulevard” when you can’t feel Williams trying to push through the labored script to the bitter truth of Nolan’s agony. It’s all in the eyes: His face barely changes expression, but you can feel him constantly asking: Am I safe? Am I hidden? And of course deliberately avoiding the corollary question: How can I get out of here?

Of course there must still be closeted people in America who are stuck in unhappy heterosexual marriages and struggle with themselves every day. It’s not like one Supreme Court decision got rid of homophobia, especially when it has been deeply internalized by many people. But the social context has shifted, and to tell that story at this point in the 21st century you need to address that far more than “Boulevard” ever does. Nolan and Joy (Baker, in a nicely subdued performance) appear to be educated people who read literary fiction and watch foreign films; they live in comfortable middle-class suburbia somewhere in the Midwest or Northeast and are not overtly religious. The probability that they have known gay people personally and are not horrified by their existence approaches 100 percent, yet the issue of Nolan’s sexual orientation looms over their marriage like a shameful and unmentionable secret. The gay husband played by Dennis Quaid in “Far From Heaven” had less difficulty coming out than this guy does.

No one would be paying much attention to “Boulevard” – and I probably wouldn’t be writing about it – if it weren’t the last notable work by a celebrity suicide. It would presumably be just as bizarre, and would still feature an embarrassing movie-of-the-week depiction of a teenage male prostitute (Roberto Aguire) and the vicious redneck pimp who addresses him as “Princess.” If Williams were still with us, the reasons to watch it would be pretty much the same – to see him restlessly searching for the almost imperceptible things that keep Nolan going, the microseconds of liberated selfhood within shared memories of seeing a Godard film with Joy, or long-running private jokes with his best friend (the reliably wonderful Bob Odenkirk, a real-life friend of Williams’). Robin Williams was all about finding those moments, in his work and his life. Maybe he didn’t find enough of them, in the end. But who does?

“Boulevard” opens this week at the Sunshine Cinema in New York, with wider release to follow, beginning July 17.