Put your phone away or stay home: Anything you have to say, do or text needs to wait until the lights come up

When Patti LuPone has to shame you in public, you know we've reached peak audience rudeness 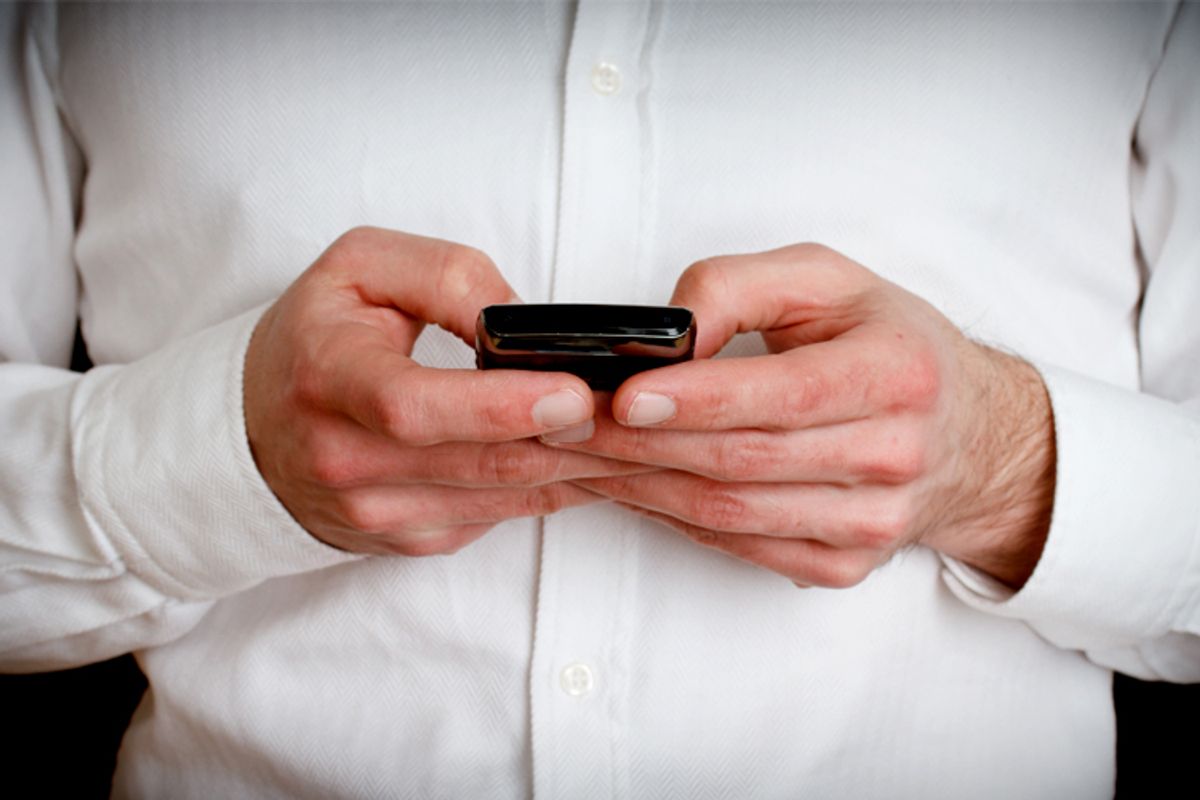 It's been a pretty spectacular few days, even by Broadway standards, for weird things to happen on the Great White Way. First, on July 2, 19 year-old Nick Silvestri of Seaford, Long Island went to see the acclaimed hit "Hand to God." The dark comedy  hadn't even begun when it already failed to captivate him, however — as evidenced by his decision to climb on to the stage and attempt to plug his cell phone charger into a prop outlet.

As audience member and voice teacher Chris York explained on Facebook, "The crew had to stop the preshow music, remove the cellphone, and make an announcement as to why you can't do that. Truly. I am a quiet and reserved person and I took great joy in loudly heckling the idiot when he returned to take his phone back. Moron. Has theatre etiquette — heck, Common Sense — really fallen that far?" He added later his assessment that the interloper "seemed more entitled and unaware of others than a cultural misunderstanding or lack of theatre experience. I was in the balcony though so am not entirely sure of the fine details."

The Guardian later reported that "The crew… removed the charger and made an announcement to the audience prohibiting them from charging their phones on stage." Afterward, cast member Sarah Stiles tweeted that she'd heard about the incident, observing, "A guy jumped on the stage and plugged his phone into the fake outlet on our set just before we started. @HandtoGodBway #fullmoon or #idiot?" while costar Marc Kudisch added, "Dear general audience, an electrical socket that's a part of the set of the play is NOT for you to charge your iPhone.....just an FYI..... And actor John Wascavage playfully warned, "In response to "Cell-o-mania '15," HAMILTON just announced that if your phone goes off mid-show, a chorus boy will shoot you." Footage of the thwarted cell phone charging — and security's swift intervention — soon found its way to YouTube.

Silvestri himself still seems only mildly aware that his behavior ranks somewhere on the Shia LaBeouf scale of uncool theater-going. He told Playbill this week that the reason he felt compelled to try to charge his phone was that "Girls were calling all day. What would you do?" but does cop that he'd had some pre-theater drinks and "We were a little banged up." He says he'd tried to charge his phone at the restaurant beforehand but "I got yelled at by the manager." Undaunted, when he got to the theater and beheld the set, "I saw the outlet and ran for it. That was the only outlet I saw, so I thought, 'Why not?' I was thinking that they were probably going to plug something in there on the set, and I figured it wouldn't be a big deal if my phone was up there too." After a scolding from security, he was permitted to stay to view the show, which he says "wasn't bad." He now offers this quasi mea culpa to the cast: "Hey, I'm sorry if I delayed your show five minutes. But you got a lot of attention from this, so maybe I made your show a little better [better known]."

Oh, you shouldn't have! I'm sure the company was already satisfied attention-wise, thanks to all those rave reviews and all those Tony nominations they got this year.

But Silvestri was not the only phone addicted patron of the arts this week in the Big Apple. The New York Times reports that during the Wednesday matinee of "Shows for Days," "Four cellphones went off, twice from the same phone." This did not sit well with star Patti LuPone, who famously stopped a 2009 performance of "Gypsy" to go medieval on an audience member who was taking photos. Then, during the Wednesday evening performance, "When the woman seated at the end of the second row texted — and texted and texted — during the show, Ms. LuPone took action." During an exit, she walked into the audience and took the phone — to the applause of some other theater goers. (The item was returned after the show.)

In a statement to Playbill, LuPone said Thursday that "We work hard on stage to create a world that is being totally destroyed by a few, rude, self-absorbed and inconsiderate audience members who are controlled by their phones. They cannot put them down. When a phone goes off or when a LED screen can be seen in the dark it ruins the experience for everyone else – the majority of the audience at that performance and the actors on stage. I am so defeated by this issue that I seriously question whether I want to work on stage anymore. Now I’m putting battle gear on over my costume to marshall the audience as well as perform." The "Hand to God" team quickly took to Twitter to announce "We’re definitely on #TeamPatti!"

These incidents, by the way, while more extreme, are not isolated. This spring, Lin-Manuel Miranda tweeted that "Tonight was the first time I asked stage management NOT to allow a celebrity (who was texting all through Act 2) backstage. #noselfieforyou." Audience member Casey Erin Clark identified the offender, observing, "That time you want to smack #Madonna upside the head for texting during the best show I've ever seen. #HAMILTONpublic."

It seems pretty basic but here it is — whether you're Madonna or some rando from Long Island, when the announcement comes up to silence your phone, silence your phone. Put it away. Get your money's worth and enjoy the show. Respect the hard work of the people who created it for you, and the time of the other audience members who paid to see a performance, not your glowing brick. Unless you're waiting for that liver donor to come in, you can probably go an hour or two without looking at it.

And if you can't, then until we can bring back public stockades for selfish behavior, just stay home. As Lupone says, "I don’t know why they buy the ticket or come to the theater if they can’t let go of the phone. It’s controlling them. They can’t turn it off and can’t stop looking at it. They are truly inconsiderate, self-absorbed people who have no public manners whatsoever. I don’t know what to do anymore. I was hired as an actor, not a policeman of the audience." But if you're texting during Ms. LuPone's show, don't be surprised if, quite justifiably, she polices you anyway.