The Wimbledon we wish we could see: "SNL" directing alum brings Kit Harington and Andy Samberg together for epic tennis mockumentary 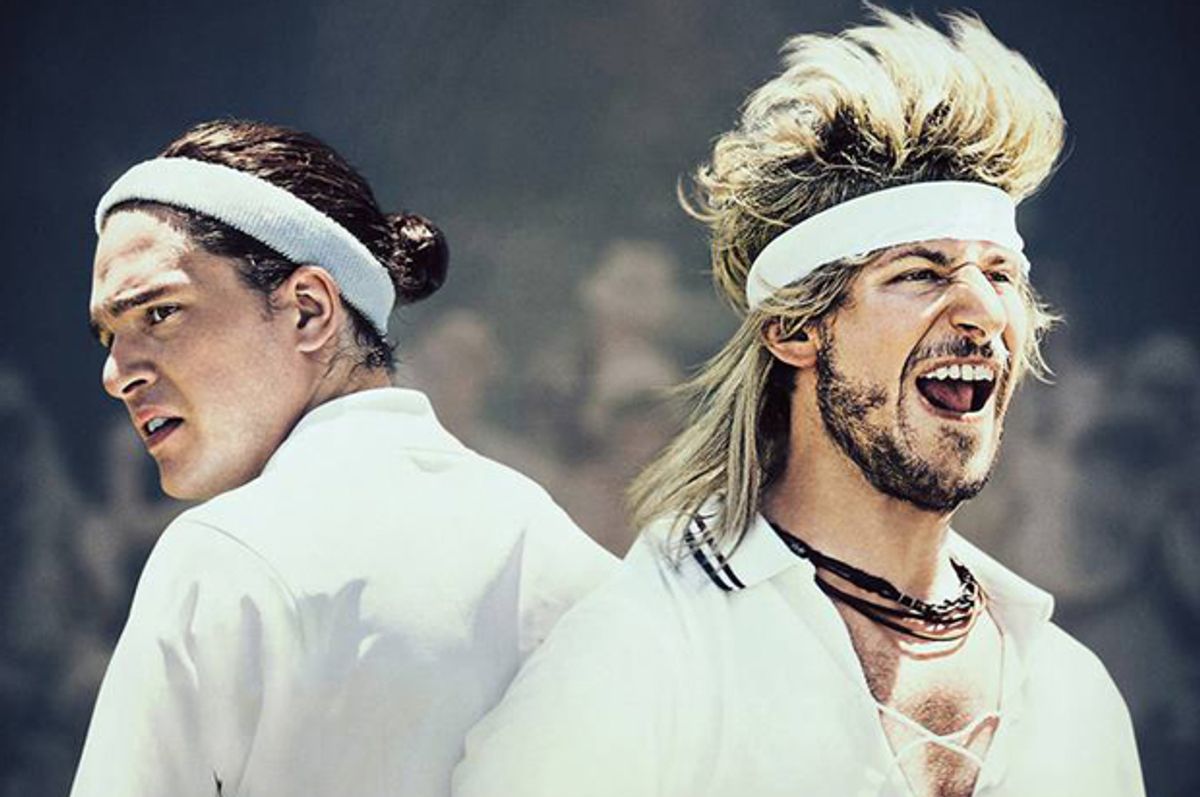 Before Salon’s interview earlier this week with Jake Szymanski, there was a long discussion off the record about what to discuss. Szymanski is the director of the HBO’s “7 Days in Hell,” which is best enjoyed if you don’t know much more than it’s a fake documentary about an epic tennis match

The jokes — which are packed tightly into the 41-minute mockumentary — come in every variety. There are sight gags. There is wordplay. There are cameos of celebrities with funny clothes and funny accents. There are random acts of nudity.

“7 Days in Hell,” which stars Andy Samberg (“Brooklyn Nine-Nine”) and Kit Harington (“Game of Thrones”) as two titans who square off in the greatest — and, at seven days, easily the longest — tennis match in history, airs Saturday on HBO. The mockumentary is already available for streaming on HBO Go and HBO Now.

Szymanski spoke to Salon from Hawaii, where he is shooting his first feature film, “Mike and Dave Need Wedding Dates,” with Anna Kendrick and Zac Efron.

Did you watch a lot of tennis growing up?

No. In fact, I was the least knowledgeable about tennis of everyone when we started talking about this project. I watched a lot of tennis online to get up to speed, but Murray Miller — who wrote it — is a huge tennis fan. It was nice to have a comedy writer who was also a tennis authority.

You went in completely different directions with the two leads.

That came out of the idea of two different types of tennis players. One is the the wild-child Agassi or McEnroe type that Andy Samberg plays. We put him in a ’90s Andre Agassi wig. The other is that side of tennis that might not be as inherently funny — well-prepared and proper and all they do is play tennis 100 percent of the time, which is Kit Harington.

Did you use a script with a lot of room for improvisation, or were most of the bits scripted?

Murray Miller did a great job with the script. He and Andy and I would work on it, and Murray would go back and do another draft. Right before we started shooting, I said in a call that Aaron Williams [the Andy Samberg character] would have been the type of guy who would be friends with David Copperfield. I had met Copperfield through “Funny or Die” and thought he would be down for this. We were still adding characters and adding lines all the way up to the end.

I like for actors to improvise on set, so we did a lot of that as well. We would do the lines from the script, and then we would play around. We didn’t have a lot of time because we had to do so much so quickly, we we tried to play around with it.

How many days did you shoot?

The bulk of it was shot in four days. We shot all of the tennis stuff, all of the stuff with Kit Harington, and all of the stuff with Michael Sheen in four days. Over a couple of half-days after that, we did some of the talking-head interviews. Those were people who were willing to do it if we worked around their schedules. We would go to Serena Williams when Serena was available. We got Fred Armisen and Will Forte when they weren’t making their TV shows.

The run length of the film is 41 minutes. Did you intend for it to be that short?

Yeah, we did. We had always viewed it as an ESPN “30 for 30”-style thing, and a lot of those are only 20 or 30 minutes. We never wanted it to outstay its welcome. We wanted it to move fast enough that the audience never gets ahead of it. Our first cut was probably closer to an hour and a half, and we kept cutting and cutting until we felt like it was really tight.

Were either Andy Samberg or Kit Harington attached early, or were you casting for leads who would have to play a little bit of tennis?

This was an idea that Andy Samberg and Murray Miller had had for a long time, so Andy was involved from the get-go. He was the one who reached out to me about it. We wanted a great British actor up for something like this, and Kit Harington was up for it right away. Everyone in our crew were such “Game of Thrones” fans that we couldn’t believe we were getting him.

This interview would get a lot more traffic if you would just tell me if Jon Snow [Harington’s character on “Game of Thrones”] is dead.

When did you shoot this?

We shot it last summer in Palm Springs when everyone was done with their own shows.

Did you have any trouble figuring out what’s funny about tennis?

It wasn’t that hard because we made it character-based. It was about these crazy roles that Andy and Kit and people like Michael Sheen were so committed to. Michael Sheen was wonderful, and we had barely a half of a day with him. He had prepared this amazing creep of a character.

Michael Sheen is extremely funny in this. Who is he supposed to be?

He told me he had based it on an old British interviewer. He had said beforehand that he had an idea for the character, and he showed up the morning of his shoot and said, “I brought some wardrobe.” He showed up to the shoot fully committed to the character.

You have directed on several episodes of “Saturday Night Live.”

That’s how I met Andy Samberg. I would direct scenes and pre-taped pieces for the show, like a commercial parody or a video piece.

Is that much different that the shorts you’ve done on “Funny or Die”?

I went from “Funny or Die” to “SNL,” and it was actually pretty similar. Even doing the digital shorts at “SNL,” you’re throwing them together so fast. You’re nailing down the idea on Wednesday or Thursday, shooting it on Friday, and staying up all night to edit for the show on Saturday. Even though you have the best team to put it together and the funniest people to be in it, it’s always a mad rush to get it done. That’s part of what’s great about doing them.

You’re doing this interview from Hawaii where you’re shooting your first feature film with Anna Kendrick. That doesn’t sound terrible.

We’ve got Anna Kendrick, Zac Efron, Adam DeVine and Aubrey Plaza out here for a movie called “Mike and Dave Need Wedding Dates.” It’s an R-rated destination wedding comedy about these two brothers — Zach and Adam — who go looking online for dates to their sister’s wedding. They find Anna Kendrick and Aubrey Plaza, who wind up being bigger monsters than the boys are. We’re having a good time.

You’re used to working in a short form. What’s funny to you that will work in a longer project?

You have to make sure that you’re concentrating on a story that’s going to last an hour and a half instead of three minutes. A lot of that is making sure you’re not selling out the characters or selling out the scene for a quick kill but that you’re doing something that plays to the emotion of the entire movie.

Do you want to do mostly comedy? Mostly short work?

I’ve been really, really lucky so far in my career where I’ve been able to work with people I think are great on stuff that I think is great. I’m a comedy nerd and have always loved it, so I mainly just want to work with people who make me laugh and try and make sure it shows up on screen.