The rise and fall of the German Empire: What Greece's crippling bailout deal reveals about the future of Europe

Germany has dominated the Eurozone and forced it to run according to its parochial interests. What happens now? 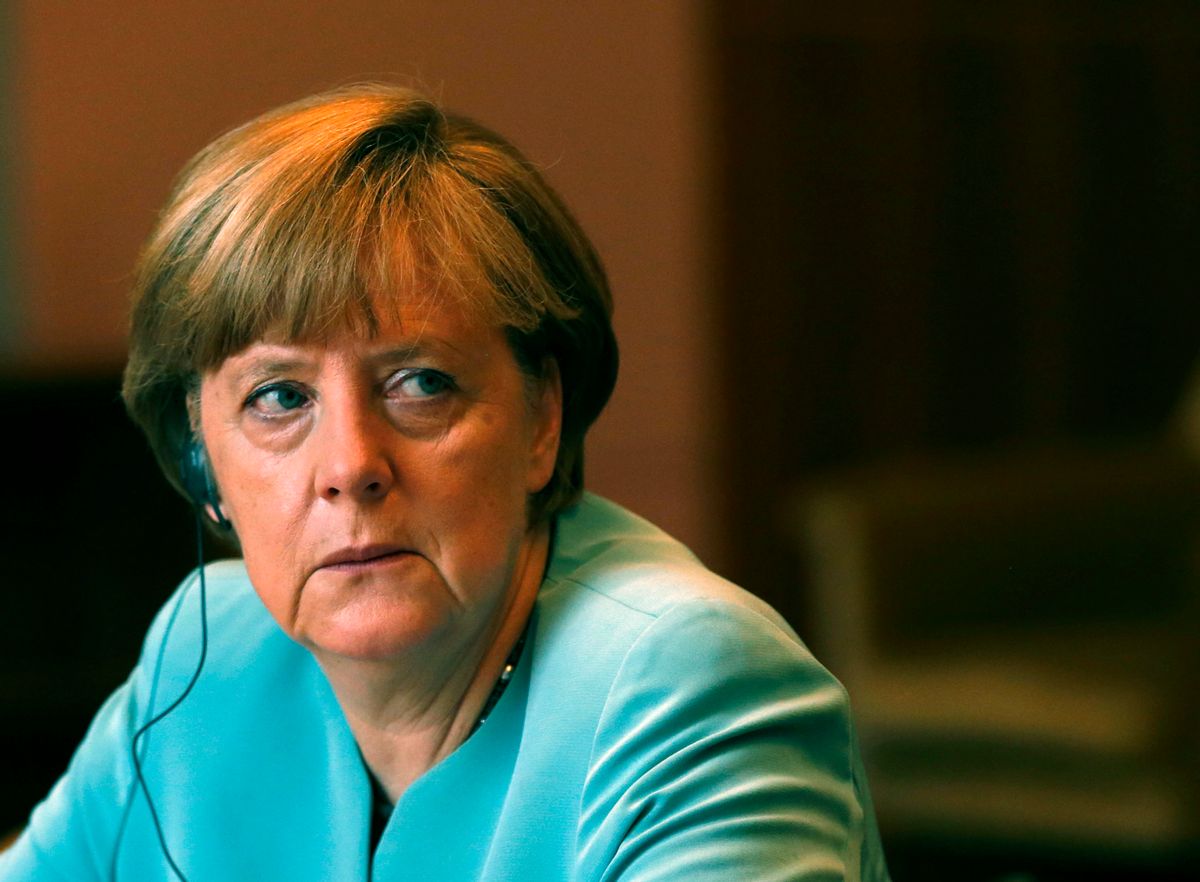 The flag of Europe still has twelve stars on it, and organizations with names like Eurogroup and European Commission and European Council still persist. But despite the unfortunate historical overtones, in order to be accurate we need to call the governing body in Europe the German Empire, after the events of this weekend. And the thing about empires is that they end sooner or later, because human beings don’t much like to be controlled by an overlord they never elected or endorsed.

The end of the German Empire will not take place today. Greece folded, giving up their sovereignty and agreeing to all the creditors’ demands, even to sell off national assets, without achieving anything more than a vague promise of debt relief in return. They decided to accept the devil they knew – crushing austerity, a worse package than what was on the table just weeks ago – rather than the devil they didn’t – the Grexit.

But that’s only the end of the story if you think Greece will meet the punitive objectives laid out in the surrender document, which look like the terms you impose on a country that lost a war. And even if they did manage to meet those terms, you would have to believe that austerity would generate economic growth to enable Greece to pay its debts back at some future stage. In this sense, it was a delay of the final outcome.

Far more important than the details of the Greek occupation – you can read the gory details here – is the manner in which it was employed. The German consuls were as vindictive as possible, slowly and deliberately grinding down the Greek economy, carpet-bombing the political opposition, and openly threatening expulsion from the European monetary union as punishment. The European Central Bank, Germany’s weapon of choice, supported the most crass form of economic bullying to stifle dissent that I’ve ever seen. The primary responsibility of a central bank is to manage the money supply in the countries it is associated with. The ECB did that by cutting off the money supply to Greece, no different than denying food to refugees. In fact, it’s very precisely the same, given the shortages of basic needs resulting from Greek importers having no way to ensure payment for goods.

(As a side note, some in the Greek government did in fact see this coming, if you believe former Finance Minister Yanis Varoufakis. But to prepare for such sadistic behavior on the part of the central bank is akin to preparing for an ambush by a psychopath. There’s not much for one to do.)

None of the satellite countries in the German empire missed the message. Step out of line, try to reverse an austerity agenda that has brought recession, if not outright depression, to the countries forced into its maw, and you will be pulverized, humiliated, forced to grovel and beg forgiveness.

The precious Greek debt that Germany, and to a lesser extent northern European partners like Finland, Austria and the Netherlands, refuses to cancel can be seen as excess funds the Germans acquired by dominating the Eurozone and forcing it to run according to its parochial interests. Germany doesn’t maintain a solid manufacturing base simply because of its industriousness and pluck. It operates with the benefit of an undervalued currency, blended to incorporate poorer countries like Greece.

This makes German goods artificially cheaper on the world market, boosting its economy at the expense of its Eurozone partners. Italy has had virtually no growth since the euro’s initiation in 1999. Spain and Portugal have not prospered. France is moving toward stall speed. So it’s not unreasonable to see the substantial debt Greece owes directly to Germany as recompense for all the money the German economy has been making off of Greece’s inclusion in the euro.

Of course, Germany doesn’t see it that way. They see it as a struggle of will, where they were the sober, cost-conscious paragons of virtue, no longer accepting of the lazy profligacy of their southern neighbors. This topples everything the European Union project was supposed to be about, with all the ugly nationalism that helped light the fire for two world wars rising to the surface.

In reality, the dream of a United States of Europe was never realistic, given these primal forces. If it was, the parties involved would have set up a legitimate fiscal union and real power to the elected European parliament. Instead, they built a way for Germany to lord over a series of client states. And this became very clear amid economic crisis.

As Wolfgang Munchau writes, expulsion from the German empire, with the explicit promise of economic immiseration down that road, is now squarely on the table in any future talks with Greece, or any other country that manages to get itself into trouble. And other countries will; at least, they will occasionally seek fiscal or monetary policy interventions at odds with the emperor’s wishes. There is no democratic political union anymore, it’s just a shotgun marriage run on threats.

Once you eliminate that democratic possibility of a Europe based on shared interests, once you affirm that only the interests of one ruling nation matters, there’s no real advantage to everyone sticking together other than fear. And fear doesn’t last forever, particularly when those supposed to be afraid of the unknown are stripped of everything they’ve got in the process. Does this mean that Britain will now leave the European Union, the subject of a coming vote? Does it mean that the next left-wing anti-austerity or right-wing Euroskeptic party that comes into power will not suffer the same fate as Syriza? It’s hard to predict when the German Empire will fall, just that it will.

Why should this matter to a farmer in Indiana or an office worker in New Jersey? It certainly mattered to America the last two times European great powers sniped at one another; these things tend to escalate. In addition, there’s nothing approaching economic logic in what the satellite states of the German Empire have been forced to endure, and at some point that can bleed over. Most important, the inevitable breakup will breed a global instability layered atop an already shaky world.

The #ThisIsACoup hashtag that pinged around the world over the weekend shows a loss of popular support for a project whose supporters can be confined to small rooms of elites in Brussels and Berlin. Even empires need someone to believe in them. Otherwise, the coup plotters become vulnerable