"Trainwreck": Amy Schumer's a comic genius, but this lumpy Judd Apatow rom-com doesn't do her justice 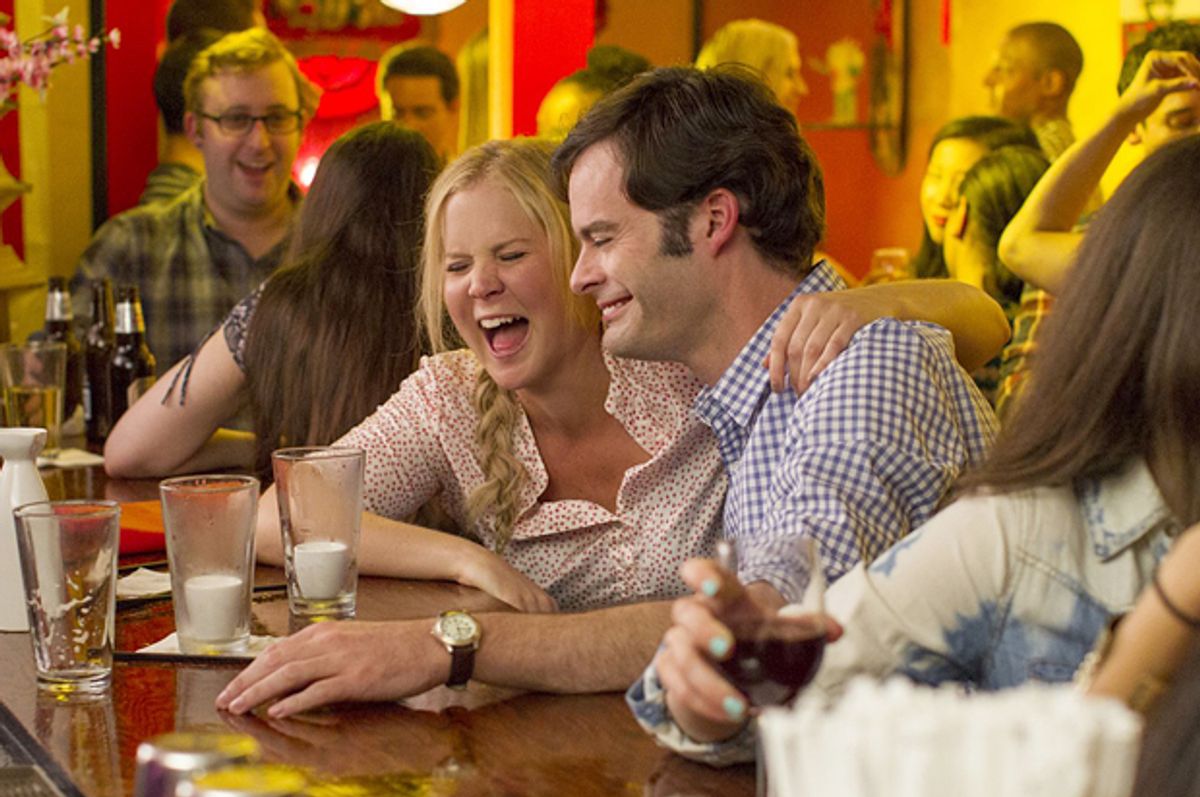 There’s really no disputing Amy Schumer’s uncanny dominance of the American comedy landscape circa 2015. “Trainwreck,” her lengthy and labored rom-com with benevolent comedy emperor and self-appointed Cosby prosecutor Judd Apatow – she wrote it and plays the lead, Apatow directed it – displays both the immense potential and the current limits of Schumer’s comic genius. Right now she is still the minidress-wearing, minibar-raiding female version of Tom Riddle before he became Lord Voldemort, not quite aware of the extent of her powers. In English, my movie review is as follows: “Trainwreck” is not very good, but Schumer is frequently amazing in it. Officially, her fans will not be disappointed; not far below the surface, it's a bummer.

As Schumer herself has put it, she “goes in and out of playing the irreverent idiot,” a complicated dance that presents a constant challenge to gender stereotypes and constantly cuts the ground out from beneath haters and detractors. People are at liberty to think she’s not funny, of course, or to suggest that any particular Schumer assault on the great shibboleths of race and sex and gender is poorly calibrated. But they are always in grave danger of being rendered utterly foolish by the deep Socratic game of Schumer’s blond, bland, slutty persona, by her shrewd performance of cluelessness. As she has demonstrated on “The Bachelorette,” an egregious television program that she has almost entirely subverted, or at least has provided with a raison d’être it never possessed in the first place, the calculated blankness of Schumerism is like gender-war stealth technology, designed to penetrate the Soviet-style inefficiencies of the male radar system.

Fame is still different for women and comedy is still different for women, as the great “Can girls be funny?” debate of 2014 reminded us. Amid this decade’s explosion of female-centric and/or feminist comedy, Schumer has taken on a cultural importance she didn’t necessarily want or expect, and which she has achieved at least partly by being in the right spot at the right time. But she has also worked it like nobody’s business. As Emily Nussbaum of the New Yorker observed about Schumer’s rapid rise, “when you’re put on a pedestal, the whole world gets to upskirt you.” Schumer has short-circuited that process by upskirting herself, so to speak – by appearing to reveal too much while revealing only how much she remains in control. She delivered a window-rattling manifesto to the Ms. Foundation last year (“I say if I’m beautiful. I say if I’m strong”), and she covers the August issue of GQ clad in the bikini worn by Princess Leia as Jabba the Hutt’s sex slave. Those are not contradictions but interrelated and integral elements of the same package.

“Trainwreck” has clearly consumed a lot of money and time and ingenuity. It’s a personal passion project for Schumer, on one level, and also her big coming-out party held at the apex of the pop-culture volcano. As compromised and undermined as the Hollywood movie is by the rise of TV and the victory of the robots, it still confers a mysterious anointment of prestige, not to mention large piles of money. There are things in “Trainwreck” that are startling and brilliant, but they mostly don’t have much to do with Schumer herself or what screenwriting manuals would call the arc of her character, a New York magazine writer (also named Amy) unhappily devoted to a life of one-night stands and binge drinking. (There is an almost uncanny resemblance between the Amy character and the persona described by my Salon colleague Sarah Hepola in her remarkable memoir “Blackout.”)

A lot of that Amy material is funny enough, and delivered with Schumer’s practiced blend of cynicism and vulnerability, but also pretty conventional, as when she wakes up in some guy’s bed (having violated the “sleepover rule”) and prays aloud, “Dear God, don’t let it be a dorm room.” It’s arguably worse than that – she’s on Staten Island! Goofier and more tangential aspects of “Trainwreck” are more original, including NBA superstar LeBron James’ unlikely role as the endlessly supportive and concerned best friend to Amy’s leading man, a sports surgeon named Aaron Connors and played by Bill Hader. James essentially spoofs the yenta-like “less attractive friend” found in dozens of rom-coms, and does so with immense charisma and good cheer. LeBron is not going to watch the new “Downton Abbey” a day late, thank you very much (everyone in the Cavs’ locker room will be talking about it!), and he’s kind of worried that wild-living Amy will break his buddy’s fragile heart and trample the fragments underfoot.

James’ character is the most triumphant result of a subtle politics of gender subversion that runs through the script of “Trainwreck,” as through all of Schumer’s work, but is not entirely successful. Schumer has never been shy about attacking societal sexism and privileged female smugness in the same breath, and the movie’s Amy is a dim, manipulative and deeply wounded person who constantly deceives her so-called boyfriend, a bodybuilder (played with zeal by wrestler-turned-actor John Cena) whose true erotic appetites do not seem to encompass Amy or anyone else of her gender. There’s an amusing montage of all the men Amy brings home and then banishes in the wee hours, their dreams of enduring romance dashed. One announces: “I guess I really do like pussy!”

Actually, you’d think people would have figured that out: If you want to be the star of your own movie, you don’t put Tilda Swinton in it, not even as a wish-granting gnome in a two-second cameo. In a sense that testifies to what Apatow and Schumer have made here, which is (oh zing!) a bit of a train wreck, sprawling and generous and much too long. (How many movies has Apatow sabotaged by pushing them to the length of 19th-century operas, with overstuffed plots to match?) "Trainwreck" provides ample evidence of Schumer’s comic genius and also suggests that maybe she’s not much of a movie actor right now (or a screenwriter) and that she functions best in small controlled doses.

Toward the end of the movie we see Schumer trying her best to do a dance routine alongside the New York Knicks’ cheerleaders (whom her character has previously derided), and there’s so much fearlessness and vulnerability in that brief number, so much abashed sexuality and proud sexuality and willingness to make a fool of herself in pursuit of a higher freedom. It makes you laugh and breaks your heart and inspires you to take chances; in a moment of pure physicality, free from all the nervous talk, it redeems and embraces all the possibilities this disappointing, cautious retread rom-com hints at and then avoids.