The conservative network has its fair share of dopes. But "Fox & Friends" co-host Brian Kilmeade takes the cake 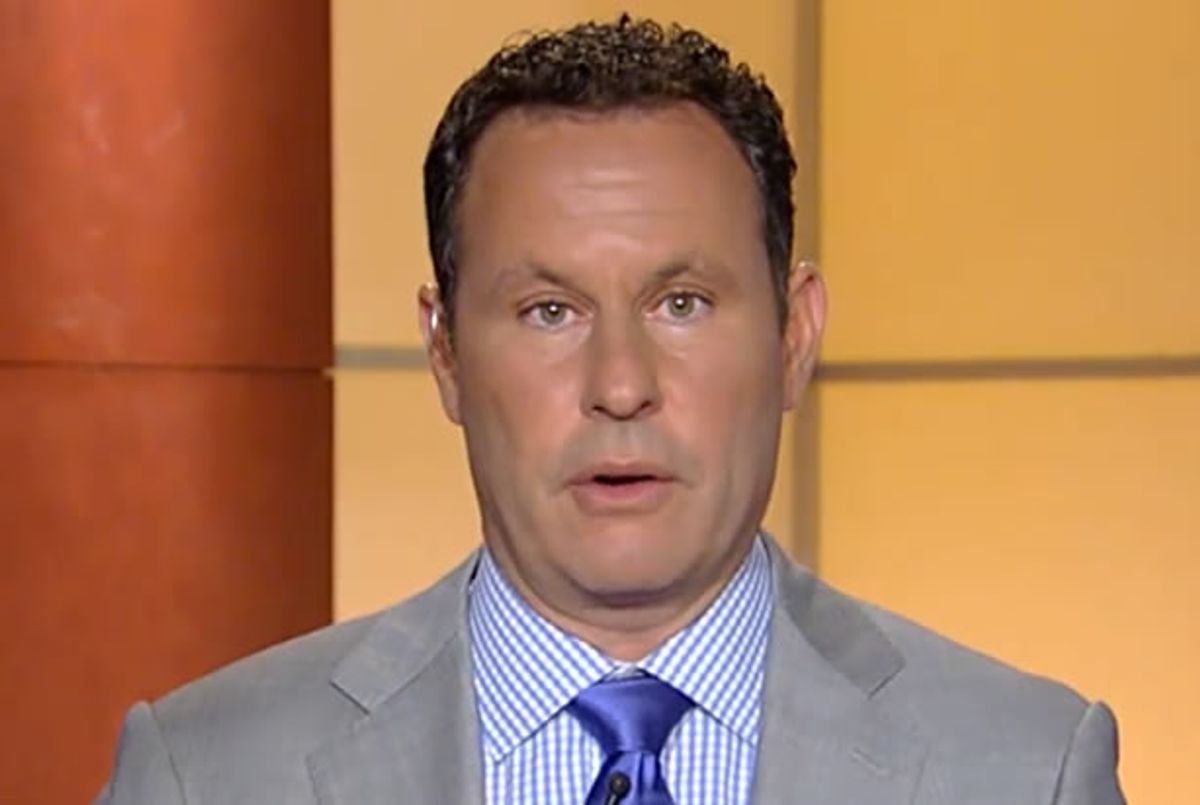 Brian Kilmeade is, without a doubt, intended to be a walking punchline on a program already full of them -- "Fox & Friends" co-host Steve Doocy's area of expertise is, after all, being a man who eats -- so when he wondered yesterday why "they" don't just "have a way of clearing the waters [of sharks] before a surfing competition of this level," most observers weren't surprised that Kilmeade believes we have the technology to rid the oceans of an entire class of animals.

But instead of lingering on whether he thinks America has a shark-vacuum, a laser-equipped satellite capable of identifying and eliminating sharks from space, or a weather-controlling machine capable of suctioning up the offending fishes in a series of spectacular sharknadoes, we here at Salon thought it would be better to remind readers of the greatest things Fox News' resident man-child has said, beginning with:

1. Mennonites are un-American, because "without war, we're not America"

Kilmeade went after Goshen College, which started playing an instrumental version of the national anthem before sporting events because the song's lyrics run counter to the school's pacifist principles. Or, as Kilmeade put it, "the national anthem is banned."

During a celebration of National Taco Day, Kilmeade asked Nicaraguan meteorologist Maria Molina to describe to him what it was like growing up eating tacos every day. "I didn't grow up on tacos," she replied. "I'm Nicaraguan, it's not a native food."

3. "Not all Muslims are terrorists, but all terrorists are Muslim"

In a conversation about a discussion of 9/11 on "The View," Kilmeade said that the debate on that daytime show "is almost like our debate on training wheels" -- a remarkable statement given that he was in the midst of pedaling his bike off a cliff into a ravine whose bottom was lined with plastic explosives rigged to detonate on impact. "It wasn't just one person," he said, "it was one religion. Not all Muslims are terrorists, but all terrorists are Muslims."

4. "We keep marrying other species and other ethnics"

Though former co-host Gretchen Carlson struggled mightily to stop him, Kilmeade said the reason that married people in Finland and Sweden aren't as likely to suffer from Alzheimer's is because Americans "keep marrying other species and ethnics. Swedes have pure genes, because they marry other Swedes. Finns marry other Finns, so they have a pure society. In America, we marry everybody -- we marry Italians and Irish." Herr Kilmeade later apologized for valorizing the superiority of the master race.

5. "Grab your gun and go get a drink in Virginia!"

In an anti-gun control statement so strident even the NRA would slowly back away, Kilmeade endorsed a Virginia measure that would allowed for concealed carry in bars by imploring viewers to pack up their heat and go out and get drunk -- because what could possibly wrong?

His response to to the mention of United Nations Secretary General Ban-Ki Moon's name.

Kilmeade was discussing the appearance of Sergeant Bowe Bergdahl's father, who had grown the beard as an act of solidarity with his captured son. "He says he was growing his beard because his son was in captivity," Kilmeade said. "Well, your son’s out now. So if you really don’t — no longer look like a member of the Taliban, you don’t have to look like a member of the Taliban. Are you out of razors?" Apparently, it didn't occur to Kilmeade that he might have better things to do after his son was released.

He was upset that "Saturday Night Live" chose Bobby Moynihan to portray him in its parodies of "Fox & Friends," so when Doocy asked him how he felt about it, Kilmeade replied with a little fat-shaming. "I pray he got another job," he said. Doocy interjected, "or had lap band surgery," which made Kilmeade wonder whether "Chris Christie couldn't get him a coupon."

BONUS: That time he hit a 2-year-old in the face with a basketball live on national television

He didn't actually say anything stupid here, but...

Watch actual clips of Kilmeade's idiocy at the links above -- here's a link to the parody of himself he so despises.