The soul-sucking emptiness of "Pixels": Donkey Kong is the least of humanity's worries in Adam Sandler's latest desperate quest

Save us not from malevolent arcade game space invaders, but from Sandler's unbearable alienation 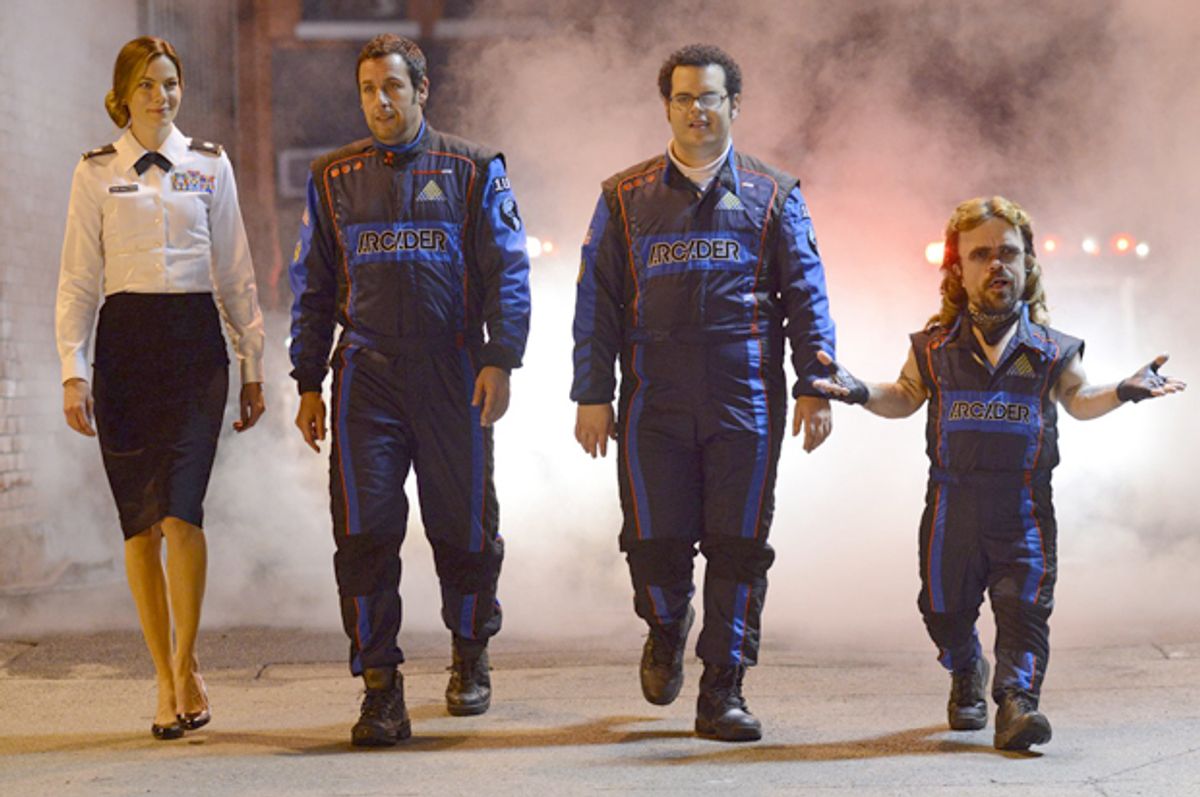 For a movie that’s supposedly about delivering weightless, uncomplicated fun, “Pixels” is an overwhelmingly sad experience. Some of that is outside the control of director Chris Columbus, who despite all his years as a competent Hollywood craftsman and a résumé that includes not one but two major landmarks of popular entertainment (“Home Alone” and the first Harry Potter movie) is stuck here making an Adam Sandler vehicle that features Kevin James as the president. (No, not the president of the PTA or the service workers’ union or the Hair Club for Men. The president of the United States of America.) But a lot of “Pixels” is also sad on purpose, in a way that percolates through the whole enterprise with a distinctively awful flavor, not unlike that of Folgers mountain-grown coffee.

That’s a somewhat appropriate reference for a movie in which aliens contact us by way of the “Where’s the Beef?” lady, the Hall & Oates video for “She’s Gone,” the “Lucky Star”-era, jewelry-bedecked Madonna and other antique cultural signifiers most of the audience probably won’t recognize. Those random absurdities are by far the funniest things about “Pixels,” along with the supporting performances by Peter Dinklage as an arrogant and unscrupulous video-game wizard named Fireblaster and Josh Gad as a deranged conspiracy nut about two micrometers shy of full-on psychosis. When we get to the purported main story about Sandler saving the world from alien space invaders who have interpreted the arcade games of the 1980s as a summons to an intergalactic throwdown, the pain and pathos become nearly intolerable.

“Pixels,” which was written by Tim Herlihy and Timothy Dowling and based on an original short film by Patrick Jean, is more than just another lazy Adam Sandler movie in which he is actually the coolest guy in the universe but badly misunderstood (especially by the ladies). It is also another lazy Adam Sandler exercise in ‘80s nostalgia in which, blah blah blah. Ladies, please! Form a line. Early in the movie, Sandler’s character, an orange-jumpsuited tech installer named Sam Brenner, finds himself in the closet – I know, I know, that’s so funny, but it’s an actual closet! Where was I? Oh yeah, so there’s Sam, inside a big walk-in closet with a hot divorcée played by Michelle Monaghan, who is crying because her ex-husband is about to marry a 19-year-old Pilates instructor named Sinnamon, with an S. (That sly touch must have gotten a high-five in the writers’ room, because it comes up over and over again.) It’s a mediocre meet-cute at best, and then Sam bogarts the whole scene by complaining about his failed marriage, and how his ex-wife’s fertility doctor got her pregnant without bothering to use a turkey baster, if you catch his drift. Women! What can you do?

I don’t know why that level of narcissism should surprise me at this point. Sandler’s entire performing career is that of a person who can’t resist his compulsions, and can barely be bothered to disguise them. Every time I sit through one of his movies and marvel once again that millions of apparently normal people find him amusing, I feel like American guys are in worse shape than I thought. Sandler can’t seem to stop himself from making movies in which ancient adolescent traumas must be revisited and avenged. In “Grown Ups,” perhaps the most egregious Sandler film of them all (although that’s a high bar), it was a long-ago basketball game won by the dirtbag locals over Sandler’s character and his cool friends.

This time around, the Parsifal-like unhealed wound is the legacy of a video-game competition way back in ’82, where 10-year-old Sam was bested at Donkey Kong by Fireblaster. (And where the accompanying music was oddly non-contemporaneous: We hear “We Will Rock You” and Cheap Trick’s “Surrender” over and over, both of which are ‘70s hits.) And as in that scene in the closet with smokin’, weepin’ Divorce Mom, Sandler cannot help thrusting himself into the limelight and baring his wounds even when he’s supposed to be playing a decent and sensitive guy who relates well to women. Here’s a dating tip, fellas: Announcing that you’re a decent and sensitive guy and then launching into a monologue about your pain and loneliness sends kind of a weird signal. If you need further elucidation on this point, please see me during office hours.

This problem only gets worse later in the movie, to the point where you have to wonder whether anyone at Columbia Pictures who read this script has ever had contact with social media, or for that matter contemporary social reality. There’s a scene that’s meant to seal the deal between Sam, whose true awesomeness has been revealed, and Monaghan’s character, who despite her closeted crying turns out to be a high-security military officer working closely with Sam’s old friend, aka the dancing ignoramus POTUS as played by James. Literally the only tack Sam takes in this conversation is to praise this hardass, sheath-skirted lieutenant colonel for her beauty, ridicule her ex and goad her into dishing dirt on the aforementioned Sinnamon, specifically her flounder-like eyes. I mean, some of that could theoretically be funny in the right context, but as packaged herein the message could not be clearer: Doesn’t matter if she’s a military intelligence officer or a florist, guys. The only thing she cares about is that you think she’s cute.

As for the elaborate CGI action sequences in “Pixels,” when aliens attack our planet taking the form of hostile entities from Galaga and Centipede and Pac-Man and so on – don’t worry, fans, the filmmakers are aware that Pac-Man is not evil and that becomes a plot point of sorts – I mean, whatever. It’s all perfunctory and embarrassing psychological theater designed to prove that Adam Sandler is way more of a badass than an entire team of Navy Seals put together. I enjoyed the appearance of Q*bert, an especially beloved and peculiar icon of that era, but as someone who played various iterations of Donkey Kong for many hours when I was supposed to be reading Thucydides or Stendhal, I have to say that the filmmakers have rendered the deeply strange metaphysical universe of that game in dumb and simplistic terms. So there.

Everything that’s actually amusing or lighthearted in “Pixels” is found on the periphery of the story. Josh Gad, playing a deeply maladjusted and perhaps dangerous loser who lives with his grandmother in his 40s, seems far more joyful and alive than Sandler’s dead-eyed, faux-cheerful world-redeeming hero. If you still want proof that money and fame do not guarantee happiness, consider this dude, who has always made movies about his own desperate quest for affection and acceptance and is now a comedian pushing 50, spinning a fable about how the wasted years of his youth will yield glory at last. There’s an accidental revelation at the dark heart of “Pixels,” a competently executed film with an imaginative premise and a soul-sucking emptiness at its center. Dudes need to step up and face down evil, for sure, but it's found in a much more treacherous place than the gator-clogged river of Frogger.