"A Gay Girl in Damascus": Behind the twisted tale of a blogger who "catfished" the whole world 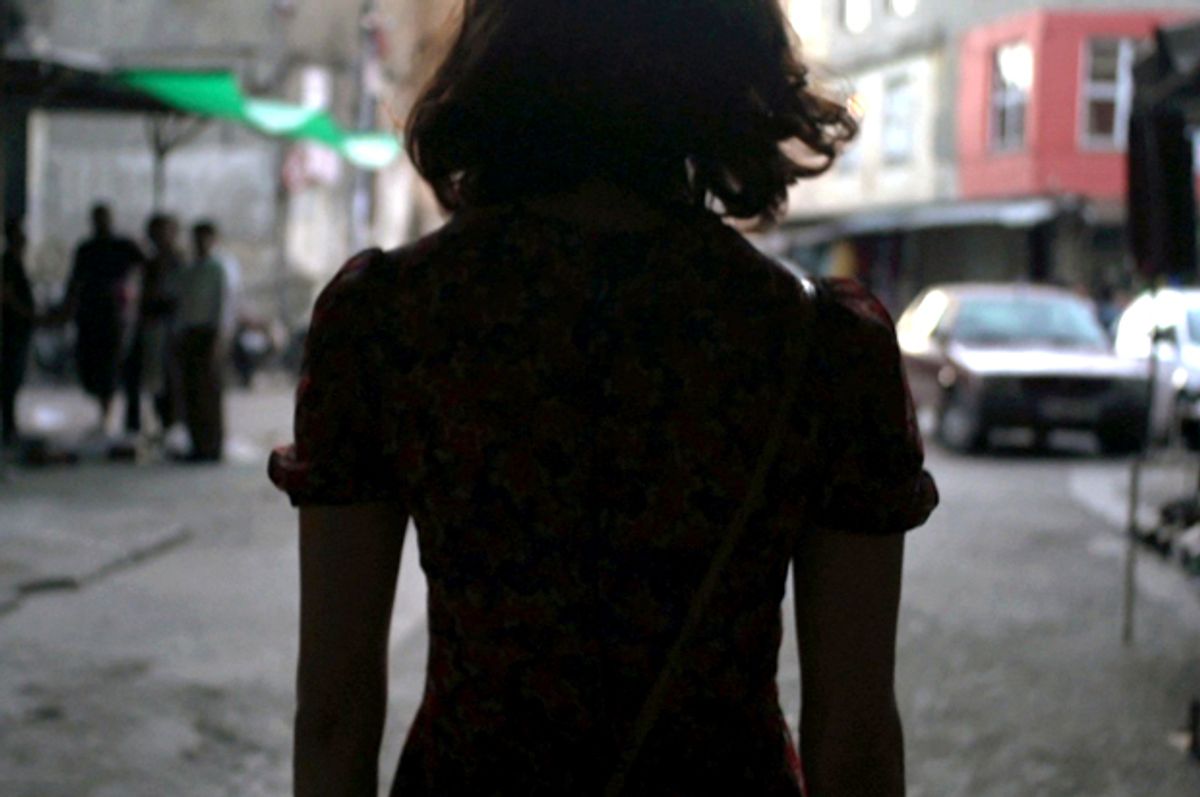 As a Syrian opposition blogger ruefully observes in Sophie Deraspe’s riveting jigsaw-puzzle documentary “A Gay Girl in Damascus: The Amina Profile” – this blogger is an actual person, unlike Amina Arraf aka Amina Abdallah, the catalytic agent behind this film – the whole thing feels like the story of a movie. Now it is one, which completes the story to some extent. But as “A Gay Girl in Damascus” makes clear, the story of Amina, the voice of Arab resistance who punked the world for four months at the height of the Syrian rebellion, lacks a clear and satisfying denouement. If it resembles fiction, it’s a diabolical fiction assembled by John le Carré, Jacques Derrida and the queer-studies academy, designed to show how little we understand about our own motivations and desires, and about the limits of human knowledge.

I actually think a spoiler warning – let’s call it a spoiler negotiation – is appropriate in this case. There’s no way to discuss the story of Amina and her blog A Gay Girl in Damascus, which became a focus of international media attention in 2011, without discussing what was ultimately discovered about its author. But it’s also true that Deraspe’s film plays out a little bit like an espionage thriller, albeit one conducted within the interlocking universes of the Syrian resistance and LGBT bloggers. If you don’t know the story and think you might see the movie, then please proceed with caution. The thing is, even knowing what I knew (or thought I knew) before seeing “A Gay Girl in Damascus,” it’s full of surprises.

One of those surprises is the immense courage displayed by French-Canadian LGBT activist Sandra Bagaria, the person who was most conspicuously injured and humiliated by the Amina hoax, to the point that many outsiders suspected her of being its perpetrator. Most of us would be eager to sweep a personal episode this embarrassing under the carpet and move on. Instead, Bagaria has cooperated in making a film that revisits how thoroughly she was duped -- and how enthusiastically she duped herself -- in an attempt to unravel what happened. As one reporter who covered the Amina story tells Bagaria, she has a degree of ownership over this story that no one else possesses, and she gets to decide where it ends.

What happened was extremely simple, and also maddeningly difficult to understand: Bagaria got “catfished,” and so did a great deal of the Western media and the Western left. As her friends in Montreal tell the story to Deraspe, Bagaria was reeling from a bad breakup when she began immersing herself in online accounts of the popular rebellions spreading across the Arab world in 2010. As a Jewish lesbian originally from France, she was deeply interested in the Middle East, and deeply interested in the struggles of young women seeking to define their own sexuality in traditional and/or religious cultures. When she met someone online who said she was a 19-year-old out lesbian in Syria, who wanted to write a personal and political blog using her real name and face, there was an immediate spark.

Amina Arraf had a thoroughly convincing Facebook page with pictures of herself and family members, and a circle of friends both inside Syria and in international LGBT and left activist movements. Her story was odd but not entirely improbable: She had been partly educated in the United States and her family belonged to the secular middle-class elite of Damascus. Her parents were OK with her sexual orientation, and her father believed that his contacts in the regime of President Bashar al-Assad could shield her from the consequences of going public. In Amina’s most widely republished blog post, “My father, the hero,” her dad chastises two members of Assad’s secret police who come to their house threatening to arrest Amina, or to rape her while her father is forced to watch. He lectures the thugs on tolerance and pluralism, tells them their families would be ashamed of them and shames them into leaving, while the entire household bursts out cheering. It was almost too good to be true.

That’s because it wasn’t true. Sandra Bagaria was not the only person fooled; it’s easy to find uncorrected repostings of “My father, the hero” all over the Internet, even now. But she was fooled on a different and more intimate level. Within days of their first encounter, Amina was sending Bagaria nude photos and initiating steamy erotic chat sessions. The personal was fatally intertwined with the political: Amina was a gorgeous young free spirit in the middle of a charismatic conflict. She didn’t mind that Bagaria was older, was Jewish and lived on a different continent. They spent hours discussing their lives, their hopes and dreams and aspirations, not to mention jointly fantasizing about hours of future lovemaking. They fell in love, to all appearances – and if you think you have to meet someone in person to fall in love, you have never read a 19th-century epistolary romance.

In retrospect, Bagaria can now see the clues, and so can the rest of us. Amina was never available to Skype or talk by phone (“I’m sure my phone is tapped”), and her nude photos never included a face. But that’s the easy part. It’s not so easy to be sure that you or I would not have been beguiled in Bagaria’s place. Some people in the Syrian resistance and in the nascent LGBT community of Damascus were puzzled when Amina began writing A Gay Girl in Damascus in February 2011 – who was this person, and had anyone actually met her in person? But after the Guardian published a glowing article about Amina and her blog (accompanied by a photograph Amina had supplied), and a whole universe of LGBT and/or progressive bloggers began reposting Amina and corresponding with her, the fiction became a self-reinforcing circle. Amina was real because so many people knew her, or “knew” her. She was real because she had a real girlfriend in Canada. She was real because she had been interviewed, or “interviewed,” by one of the world’s most respected news organizations.

Another important aspect of “A Gay Girl in Damascus” involves setting the record straight about how the Amina hoax was exposed. Read mainstream media accounts like this chronology in the Telegraph, or the agonized apologies posted by the Guardian, and it sounds like the watchdogs of journalism, after a momentary lapse, did their jobs and dug up the truth. In fact, the media largely played along with Amina and caught up to the facts late, after a woman in London named Jelena Lecic noticed that the pictures of Amina republished all over the world were actually photographs of her, taken from her Facebook page. When someone close to the story says that the Amina hoax revealed the superficiality of the media’s Middle Eastern coverage, along with a certain strain of “liberal Orientalism” in the Western left, that person has a point.

Exposing Amina was the work of an international network of lefty bloggers and activists, including the Electronic Intifada in Chicago, lesbian blogger Liz Henry in San Francisco, Danny O’Brien of the Electronic Frontier Foundation in London and the LGBT community in Damascus. All of those people had been puzzled or troubled by the melodramatic quality of Amina’s story from the get-go, and independently began to suspect that she might not be who she said she was. After a supposed cousin of Amina’s posted on the Gay Girl blog that Amina had been kidnapped by security forces in early June of 2011, the house of cards began to collapse. (You can still read the Guardian’s credulous news story about the kidnapping, with appended correction.)

Since Amina supposedly had dual Syrian and U.S. citizenship, activists launched online petitions urging the State Department to intervene – but the government said it had no record of such a person. One Syrian gay activist with ties to the Assad regime contacted a source in the security forces, at enormous personal risk, who told him they were not holding anyone who matched Amina’s description. Bagaria and other friends and defenders of Amina were irate when these skeptical reports began to leak out: They were endangering a vulnerable young woman who might be undergoing rape or torture! Then the Electronic Intifada sleuths dug laboriously backward through Amina’s online trail and traced her original IP address to a physical location – a house in Gwinnett County, Georgia, in the northeastern suburbs of Atlanta.

Here’s where you can stop reading if you don’t want to know the punch line: This lovingly constructed persona, which involved several years of building a social media and online dating profile, and online romances with Bagaria and several other people, was the work of a 40-year-old married American man. His name was Tom MacMaster, and since launching the Amina profile he had moved from Atlanta to Edinburgh, Scotland, where Amina had told Bagaria she might go to study. To answer your next question, MacMaster’s wife was pretty surprised by this turn of events too. In a twist that might cause readers of a Nicholson Baker novel to fling the book across the room, another prominent lesbian blogger who had had a steamy online relationship with Amina was subsequently revealed to be a man. Yeah, that’s right: Two straight men had sexted each other extensively, each believing he was getting it on with a hot lesbian.

It was MacMaster who made those comments I quoted earlier about media superficiality and “liberal Orientalism.” He has insisted that his fictional creation was meant to call attention to the real situation in Syria, but that all the attention he received as Amina was so gratifying the whole thing sorta got away from him. When Bagaria finally tracks MacMaster down and confronts him – a scene I really, really did not want to watch when it began – he seems confused and pathetic, a failed writer who discovered that his prose found a much larger audience when delivered in another voice. There is some shrewdness to his observations, but they are also ex post facto rationalizations for personal conduct that seems bizarre and borderline sociopathic. If he was into having online sex with lesbians and celebrating his inner femininity, maybe we’d have to say “Beware the Internet” and let it go. What he did to Sandra Bagaria was cruel and selfish, but she was an easy mark who chose to miss the warning signs.

Amina, however, was more than just puckish performance art or a victimless prank: The emotional damage and psychological manipulation inflicted on Bagaria serve as a metaphor for the damage done to the real human beings of the Syrian resistance and the Arab LGBT underground. We will never know how many real people in Syria were being killed or tortured or raped while the media obsessed over an imaginary teenage lesbian. In all likelihood the major news outlets would not have pursued their stories anyway, but MacMaster’s narcissism and pornographic self-indulgence sucked up the attention of every reporter following the Syria conflict for weeks, and cast a cloud of doubt over a whole range of alternative voices from the Middle East. Who could say what was truth or falsehood in that crazy place? Why should we try to sort out fact from fiction about the drone war or ISIS or Edward Snowden or Gitmo or anything else, since the only reality we can be certain about is dudes on the Internet making shit up?

“A Gay Girl in Damascus” opens this week at the Music Hall in Los Angeles, the IFC Center in New York, the Digital Gym Cinema in San Diego and the Roxie Theatre in San Francisco, and is also available online from SundanceNow Doc Club.