I could have been Sandra Bland: Black America's terrifying truth

A woman pulled over for changing lanes was arrested because she stood up for her rights. Now she's dead. 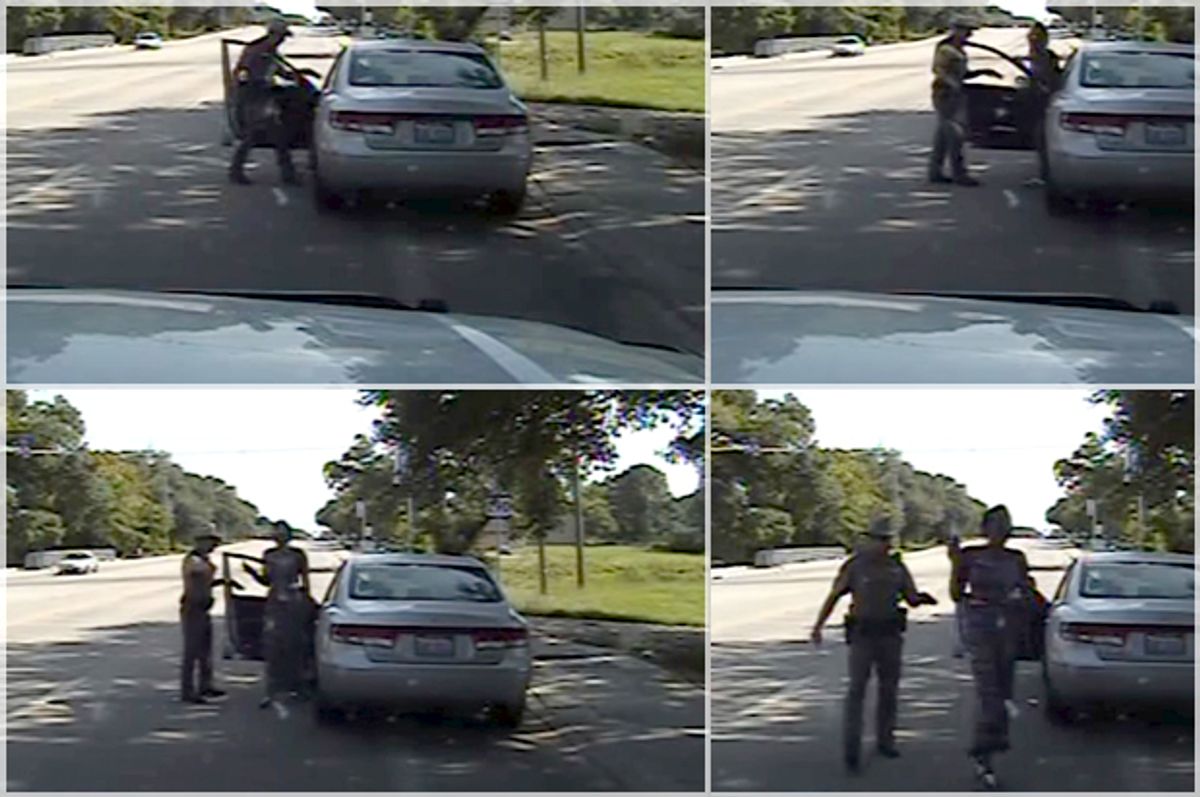 At age sixteen, I went to a high school dance with a white male friend. When we pulled up to the gym, music blaring loudly out the windows, a police officer came over as we got out of the truck, and began shining his flashlight around the cab, questioning what we teenagers were doing there -- at a high school dance. I immediately apprised the officer of the fact that he had no right to conduct a search of my friend’s vehicle without probable cause. Our music had not been loud enough for a noise violation, and we had turned it off, as soon as my friend parked the car.

The officer continued to saunter around the vehicle shining his flashlight, asking us questions, throwing his weight around to let us know he was the one with power. But I had questioned him instinctively. I didn’t think about it, about the consequences, about the ways in which my questions might be perceived as resistance or threat. I saw a police officer improperly enforcing the law, and I was just arrogant and naïve enough to think that the principles we had learned in Civics and American History actually mattered. He was on a power trip, and people on power trips irritate me.

“You seem irritated,” a police officer said to Sandra Bland when he pulled her over two Fridays ago for failure to signal. “I am. I really am,” she told him.

Off camera, Sandra narrates for the video, which she knows is recording exactly what is being done to her, that her wrist is being grabbed and twisted, her head being slammed into the ground. When she informs the officer that she has epilepsy, he replies: “Good. Good.” And because she refused to go willingly into an unjust arrest for charges that remained unnamed, she was then arrested for resisting arrest.

On three occasions I have given “attitude” to police, asked questions about unfair harassment and citations, and let the officers know that I didn’t agree with how they were doing their jobs. I have never threatened an officer or refused an order. But I have vigorously exercised my right to ask questions and to challenge improper shows of force.

I have had the police threaten to billyclub me, write unfair tickets, and otherwise make public spaces less safe, rather than more safe, for me to inhabit, all out of a clear lust for power. On the wrong day, I could have been Sandra Bland. And if a police officer pulled me over for a bullshit-ass reason, I absolutely would have given him the business on the side of the highway. By this, I don’t mean I would have made threats. I mean I would have asked questions.

All Sandra Bland did was ask questions. Now she is dead. Supposedly after hanging herself in a jail cell. Just a few hours before her sister was coming to bail her out. None of that makes sense. What does make sense are the words of her mother, Geneva Reed-Veal. She said,

“Once I put this baby in the ground, I’m ready. This means war.”

Nothing about this officer’s actions were legal. It is the evidence of Sandra Bland’s irritation that caused this officer to escalate. He firmly expected to be able to harass a citizen going about her business and have her be okay with it. He expected that she wouldn’t question him. He wanted her submission. Her deference. Her fear.

White power. Black submission. It’s the oldest trick in the white supremacist handbook. The officer might think he wanted Sandra Bland’s respect. But what he really wanted was her fear. And the fact is: He is entitled to neither. She did not owe him either her respect or her fear. When his white maleness and his badge didn't elicit the first, he used the power of that badge to compel the second.

Black people, of every station, live everyday just one police encounter from the grave. Looking back over my encounters with police, it’s truly a wonder that I’m still in the land of the living.

When we refuse gratitude, they enact every violence -- they take our jobs, our homes, refuse us respect, and kill us. And then they demand that we be gracious in the face of it.

Black gratitude is the prerequisite for white folks to treat us like human beings. But in my faith tradition, we define grace as “unmerited favor,” as undeserved, unearned. And it is God’s grace toward us that compels our gratitude toward God. Not so in a culture of white Supremacy. In a culture of White Supremacy, White people get to be God without grace. Black people must give all the grace and act grateful for opportunities to do so. If we stumble on the wrong day with the wrong white person, we pay for it with our lives.

Now here’s what I know. White people don’t like to be lumped in with each other. They don’t like racial generalizations. But in Sandra I see myself, and every interaction I’ve ever had with the police, both good and bad. Black communities are weeping and mourning with her mother, friends, and four sisters, because we know that at any time, she could be any of us. Black people don’t have the luxury of refusing identification and commonality.

This is why some Black people are asking themselves, “Why didn’t she just put out the cigarette, shut up and get through it?” Because she loved herself. Because she was on her way to fulfill her dream. Because she knew she was somebody and that she didn’t deserve to be mistreated. Because the demand for dignity always asserts itself at the height of an assault. Because the choice never should have been between her life or her dignity. Neither her life nor her dignity should be a casualty of an encounter with police. But there is what-should-be and what-is. Sandra Bland should be starting the second week of her job at Prairie View A &M University. Instead her mother is preparing to put her “baby in the ground.”

White people resist seeing themselves in the face of the oppressor. That mirror reflection is almost too much to bear. I get it. So then they resent the person that holds up the mirror. But let me just say as directly as I can: White people must begin to see themselves in the faces of the mostly white police officers who keep committing these atrocities against Black and Brown people. This will not stop until you recognize that you are them. These officers are your brothers and sisters and aunts and cousins, and sons and daughters and nieces and nephews, and friends, and church members. You are them. And they are you.

It’s a hard truth. It’s a truth that will infuriate each and every white person that floats through life on the cloud of individuality, fooling themselves into thinking that the assumptions, presumptions and privileges of growing up white in a white supremacist society somehow missed them, while touching an alarmingly large number of people who look just like them.

But she’s dead. And somebody is to blame. And it isn’t her.

Who do we blame? How do we make it stop? How shall we now live?