A history of Woody Allen and Soon-Yi Previn describing their relationship, from "the heart wants what it wants" to "I was paternal"

In a recent NPR interview, Allen called their relationship "paternal" — but he hasn't always described it this way 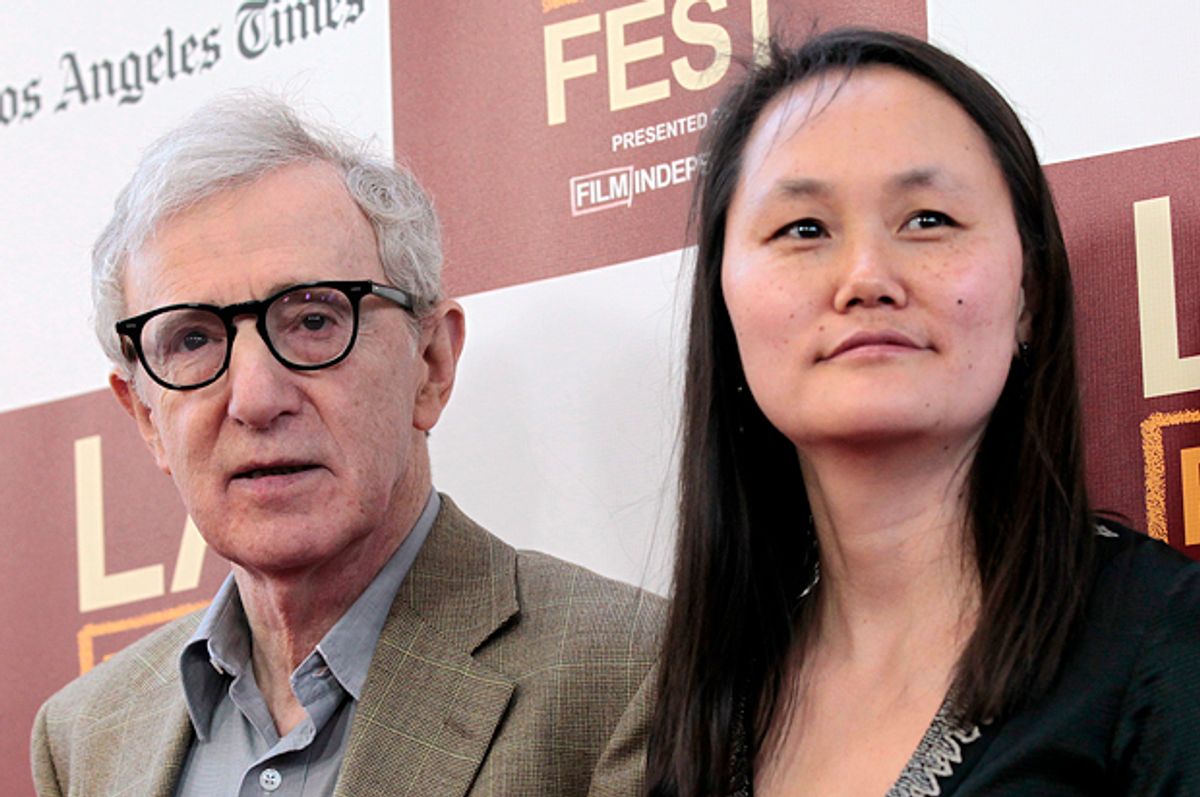 In a recent NPR interview, Woody Allen opened up about his controversial marriage to Soon-Yi Previn, the 35-years-younger adopted daughter of his former partner Mia Farrow. In the interview, Allen described his relationship to his wife as “paternal," explaining "I’m 35 years older, and somehow, through no fault of mine or hers, the dynamic worked. I was paternal. She responded to someone paternal." It’s a different tune than the one that Previn and Allen took back when news of the affair broke in 1992, with Allen demurring that she was “probably more mature than I am” and Previn rebuffing any suggestion that she viewed him as a father figure. Here’s a look at the ways Previn and Allen have described their relationship in rare interviews over the years.

After news of the relationship emerged, Allen broke his silence on the affair in an interview with Time, saying famously “The heart wants what it wants. There's no logic to those things. You meet someone and you fall in love and that's that.”

“I am not Soon-Yi's father or stepfather,” he said definitively at the start of the interview. “I’ve never even lived with Mia. I've never in my entire life slept at Mia's apartment, and I never even used to go over there until my children came along seven years ago. I never had any family dinners over there. I was not a father to her adopted kids in any sense of the word.” Adding that Soon-Yi never treated him as a father figure and that he rarely spoke to her before the affair, Allen seemed to see few issues with their relationship. “There’s no downside to it,” he said. “The only thing unusual is that she's Mia's daughter. But she's an adopted daughter and a grown woman. I could have met her at a party or something.”

In her own interview with Time, Previn again defended their relationship, saying “I was not raped, molested or manipulated as Mia has hysterically charged, nor am I retarded or mentally slow as she would have you believe.”

“To think that Woody was in any way a father or stepfather to me is laughable,” she continued. “My parents are Andre Previn and Mia, but obviously they're not even my real parents. I came to America when I was 7. I was never remotely close to Woody.”

Around the same time, Soon-Yi also released a comment about the relationship to Newsweek, imploring the public “let’s not get hysterical.”

“Please don't try and dramatize my relationship with Woody Allen,” she said in a statement to Newsweek. “He was never any kind of father figure to me. I never had any dealings with him. He rarely came to our apartment before his own children were born.”

Vehemently denying Mia Farrow’s allegations that Allen had molested the pair’s adopted daughter Dylan Farrow (another major scandal that was simultaneously engulfing the director), Previn continued, “I'm not a retarded little underage flower who was raped, molested and spoiled by some evil stepfather — not by a long shot. I'm a psychology major at college who fell for a man who happens to be the ex-boyfriend of Mia. I admit it's offbeat, but let's not get hysterical. The tragedy here is that, because of Mia's vindictiveness, the children must suffer. I will always have a feeling of love for her because of the opportunities she gave me, but it's hard to forgive much that followed.”

In November of that year, Allen went on “60 Minutes” to defend his relationship with Previn and rebut Farrow’s claims that he abused Dylan, as well as to deny any link between the two.

Asked whether he had any reservations about embarking on a relationship with Previn, Allen said “I didn't have reservations because I had--it was a totally separate thing.  Wha--what I'm getting at here is there has been an attempt to link my relationship with Soon--Soon-Yi with charges of child molestation. They're two completely different things.  I have an adult relationship with Soon-Yi.  Those people that feel--they want to feel that it's--it's questionable and not their taste or they--she's too young for me or she's Mia's daughter, and--or whatever they want to think, I'll take that heat.  I--I'm responsible for that.  I accept all the criticism that they want, you know, that--it's my life and it's Soon-Yi's life and I--I accept that. That does not mean that I should be charged with child molestation.”

In 1993, Mia Farrow and Woody Allen waged an intense custody battle in the courts, during which time Allen testified about his relationship with Previn. "At the very outset, it didn't occur to me that this would be anything but a private thing," he said, saying he hadn’t really considered how the affair would affect his children. "I felt nobody in the world would have any idea.”

When the judge asked “Wasn't that enough, that you would know that you were sleeping with your children's sister?” Allen responded "I didn't see it that way. I'm sorry."

Allen also said that he felt Farrow’s allegation that he had molested Dylan Farrow was an act of revenge for his relationship with Previn.

The pair married in Venice in 1997, and Allen’s spokesperson released the following statement: “”Six years ago, Woody and Soon-Yi decided that one day they would come back to Venice and get married. That city is very meaningful to them. Over the past six years, they have weathered a lot together, and have always been very much in love.”

In a rare interview with Vanity Fair, Allen described Farrow’s discovery of nude pictures he had taken of Previn — the catalyst that brought their affair out into the open — as one of “the fortuitous events, one of the great pieces of luck in my life… It was a turning point for the better."

“If somebody told me when I was younger, ‘You’re going to wind up married to a girl 35 years younger than you and a Korean, not in show business, not having any real interest in show business,’ I would have said, ‘You’re completely crazy,'" he said later in the piece. "Because all the women that I went out with were basically my age. Two years younger. Ten years was the maximum. Now, here, it just works like magic. The very inequality of me being older and much more accomplished, much more experienced, takes away any real meaningful conflict. So when there’s disagreement, it’s never an adversarial thing. I don’t ever feel that I’m with a hostile or threatening person."

He then floated the notion that there was a paternal dynamic to the relationship. "It’s got a more paternal feeling to it," he said. "I love to do things to make her happy. She loves to do things to make me happy. It just works out great. It was just completely fortuitous. One of the truly lucky things that happened to me in my life.”

As for his relationship with Farrow, he acknowledged that “there are things that I might have done differently,” and “probably in retrospect I should have bowed out of that relationship much earlier than I did.”

Asked whether America was ready to forgive his past scandals during the “Midnight in Paris” press tour, Allen responded: "What was the scandal? I fell in love with this girl, married her. We have been married for almost 15 years now. There was no scandal, but people refer to it all the time as a scandal and I kind of like that in way because when I go I would like to say I had one real juicy scandal in my life.”

In 2011, PBS aired an intensive documentary on Woody Allen, during which Allen openly spoke about his affair with Previn. Saying he was surprised by the media frenzy that engulfed the couple back in 1992, Allen said he “didn't think [he] wasn't that famous to warrant such interest” and that the media just wanted a juicy story. Still, the affair has had some positive consequences for his image, in that it “took a little edge off my natural blandness.”

In an extensive Guardian interview, Allen shone some light on his marriage to Previn, saying “she's never taken me seriously really. And to this day – you know I just left her now – she sees me as a complainer, a hypochondriac, a kind of idiot savant. She thinks that I'm very good at what I do and absolutely terrible at everything else. And she's probably not far off. You know, it's that kind of relationship. She's not someone who sycophantically supports. You know, people thought when I first married her that, because of this big age difference, I'd married someone who'd idolise me. But that wasn't the case at all. She hadn't seen 90% of my movies, and to this day she hasn't seen 60% of them. She's just not that interested in them. And she's a stern critic of my work. She unashamedly hates my clarinet playing. Can't bear it. Can't bear my practising. Never comes to a concert. Thinks it's torture.”

As for whether he worries about the big age difference between them, Allen simply said: ”I worry about that only in that I hope that I live long enough to give her sufficient nourishment. It's almost a given that she'll outlive me. But I'd like to see the children up and launched.”

In his most recent interview with NPR, Allen described his relationship to Previn as “paternal," saying that he liked her "youth and energy."