Lifting "the burden of race": What an Obama-led commission could learn from Clinton's failed One America Initiative on Race 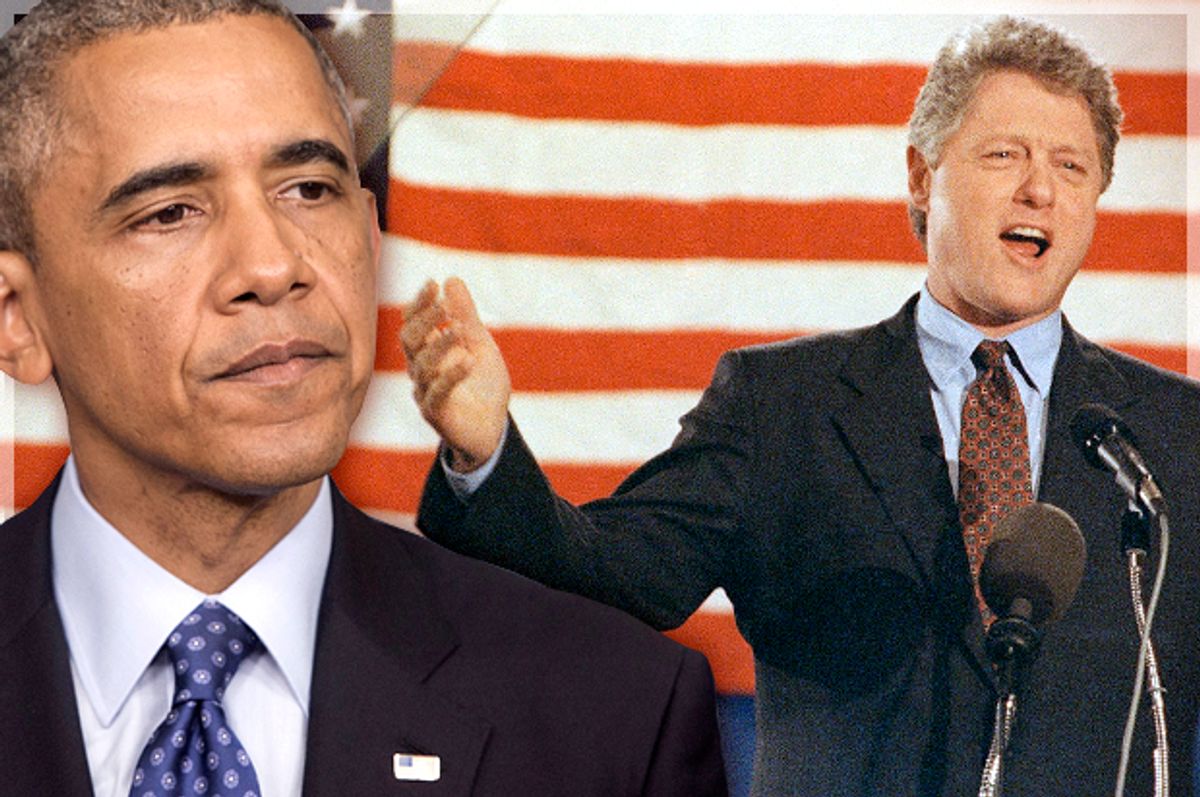 Over the centuries, black and white Americans have been more passionately and intimately involved in each other’s lives than any other two communities in the country.  Whites were invariably the oppressors, though blacks were not entirely powerless.  White planters might beat their slaves to death with seemingly no regard for their humanity, and then sleep with black women who would become the mothers of their children.  Blacks, for their part, were able to force whites to live in near-constant fear of a slave uprising, or later, some other form of concerted group action.  Whites, especially the young, have eagerly absorbed aspects of black culture, trying to learn the meaning of soul, trying to make it their own in music, speech, dress, as well as dance, and this while those who held the reins of power ignored the arbitrariness of the justice system and the racism within law enforcement.  Like twins separated at birth, blacks and whites have had a historic love-hate relationship in this country, often brutal though occasionally caring.

There have been many past attempts to heal this breach, but most have fallen on barren ground. The most revolutionary plan to achieve racial reconciliation arrived in that heady period of Reconstruction following the Civil War, when black men were finally allowed to vote and serve in legislatures, or attend one of the colleges supported by the Freedman’s Aid Society. But that “unfinished revolution” soon died, and legalized Jim Crow laws in the South returned blacks to virtual slavery.  Then in 1948 President Harry Truman seemed to recognize the moral indecency of having black men serve in the war effort while relegated to segregated units dominated by white officers; Truman’s call for a desegregated military was a major contribution to a growing civil rights movement.  So, too, was Lyndon Johnson’s War on Poverty program of 1964, which opened up new educational, housing and job opportunities, and helped inspire the civil rights movement of the 1960s. The third, and most recent, major effort at bridge-building prior to the 21st century was generated in 1997-98 by President Clinton, the man Toni Morrison once called “America’s First Black President.” By executive order, Clinton’s “One America Initiative on Race” gathered seven commissioners, experts on race, to meet in communities around the country, where they held meetings and encouraged interracial dialogue on issues of mutual concern. Then they reported on their findings.  But for a variety of reasons, including timing, its failure to arouse a national audience, and the inattention of the media, the effort essentially fizzled out.

The time might be right just now to rekindle a similar movement, to create a new and even bolder initiative on race, to address what Clinton referred to as “the unfinished work of our time, to lift the burden of race …”  Today much of the media—as in the civil rights movement-- has drawn attention to the tragic proliferation of murders of unarmed black civilians—with the church massacre in Charleston, South Carolina, being the most grisly. This steady accounting of violence has made it seem for many Americans, black and white, that the old racist ways have returned.  Almost as alarming as the murders is the so-called second generation of Jim Crow policies, legacies from the past that have had a particularly harsh effect on young black males, with far too many winding up in jails enduring long sentences for minor crimes—like stealing cooked chickens prepared in advance for a church dinner in a small Mississippi town. President Obama’s eloquence at the Charleston funeral for victim Clementa Pinckney, combined with the political courage of Gov. Nikki Haley, yielded what seemed impossible just days earlier, namely the withdrawal of the Confederate battle flag from the Statehouse grounds in Columbia, South Carolina. Here was current evidence that when Clinton’s “softer” initiative--based on healing, dialogue and, in the case of the Charleston victims' families, forgiveness—was combined with concrete action on the ground, there could be forward movement on seemingly immovable racial barriers.

So as events in South Carolina show, real progress on racial reconciliation requires a thread of connections. Mississippi provides another example.  William Winter, a former governor of Mississippi, was one of the seven members of President Clinton’s One America, and he has attempted to apply what he learned from his nationwide experience to his own state, a place once regarded as the bastion of white supremacy and racial violence.  With the help of the chancellor of the University of Mississippi and others, Winter gathered the resources to create the William Winter Institute on Racial Reconciliation at the University. Winter believed that times were changing, and after appointing Susan Glisson as executive director, the Institute began studying models of reconciliation in other once-conflicted societies. Its attention settled on the storied activities of the South African Truth and Reconciliation Commission (TRC).  The Winter Institute was  smaller in scale than the TRC, and limited by funding and a relatively small constituency, yet it was able to define its role by drawing from the TRC example and the model of Clinton’s One America to work locally on issues of racial reconciliation.

The Winter Institute mission includes efforts to settle differences, encourage harmony and establish the reality that America belongs equally to all who live here.  In that sense, reconciliation is an ideology that requires commitment and trust, as well as a willingness to take up the work of “moral repair.”  Archbishop Desmond Tutu of the TRC described it as “another kind of justice.” For some, such an approach is “too soft,” “too spiritual,” too easily manipulated by those who would use it for personal ends. The TRC, possessed of a government mandate, could grant amnesty to apartheid’s victimizers if the victims extended forgiveness, and if the commissioners believed the accused was telling the truth. The Winter Institute relies on voluntary contributions, and must work within a political environment highly polarized in the state and in the nation. Unlike South Africa when apartheid collapsed, not every American would affirm that he or she “owns” the country, that with all its faults and its gifts it is a homeland that elicits trust and respect. The civil rights movement brought an end to segregation, but it did not create a common nation in which everyone was committed to a shared view of democracy and justice.

However, with a renewed interest in race and its symbols, this may be the moment the stars are aligned, when things finally come together, when the national will favors the re-creation of a presidential initiative.  An Obama-designed commission could learn from the achievements of the One America Initiative.  It could also gather some very practical suggestions from the recent report of the Canadian Truth and Reconciliation Commission. The Canadian TRC, which examined the long years of abuse of the Aboriginals by white Canadians, replicates important parts of the Clinton Initiative, namely truth-telling, healing and justice, as prerequisites for reconciliation.  But its report goes further.  It asks that all Canadians take responsibility for what happened. Though some may have been remote from the actual events, accepting this responsibility is simply part of being Canadian.  Everyone needs to know the truth of what happened, and that means listening to the stories of those who experienced the oppression. To that end, government offices as well as schools and churches—many of whom have already apologized for past wrongs—have been requested to turn over their records so they might be incorporated with the stories of victims to create a fuller and more accurate history.

Like the South Carolina decision to take down the Confederate flag, the Canadian report links ideology about reconciliation with action. The Canadian Commission endorsed six “Education Days,” with events intended to promote understanding between those who were abused and those who were identified with the abusers. Aboriginal customs, beliefs, music, art and dance will be celebrated on one of the Education Days.  Massive walks through city streets are meant to symbolize the death of “cultural genocide.”

The Winter Institute is not able to authorize such expansive plans. But a presidential initiative working together with these regional centers of commitment holds promise. A national effort without grass-roots support has proven to be insufficient. The Winter Institute works throughout the local region, gathering stories from those who remember the past, while also attempting to cultivate new, young leadership.  One place the Institute is involved is the small city of Philadelphia, remembered as the place where three young activists were murdered by the Klan in 1964. White residents of the area thereafter adopted a policy of denial and silence that lasted 41 years, allowing the known chief conspirator of lynchings to go unpunished. An interracial group of blacks, whites and Choctaw Indians, working with representatives of the Winter Institute, came together to shape an agenda that included a trial for the suspected conspirator, Edgar Ray Killen. These were ordinary people, inexperienced in techniques of negotiation and reconciliation, yet with the help of Institute professionals, they saw that Killen was eventually tried, convicted, and sent to prison.

The work of the Philadelphia Coalition, as it was called, is an example of how racial reconciliation can evolve. Its success drew on a web of connections, from the Initiative of President Clinton, to the help of Gov. Winter, the cooperation of local leaders, and the inspiration of grass-roots people whose efforts were intended to “lift the burden of race” in America.

Carol V.R. George is Research Professor of History at Hobart and William Smith Colleges. Her recent book, "One Mississippi, Two Mississippi: Methodists, Murder, and the Struggle for Racial Justice in Neshoba County," was published by Oxford University Press in May 2015.