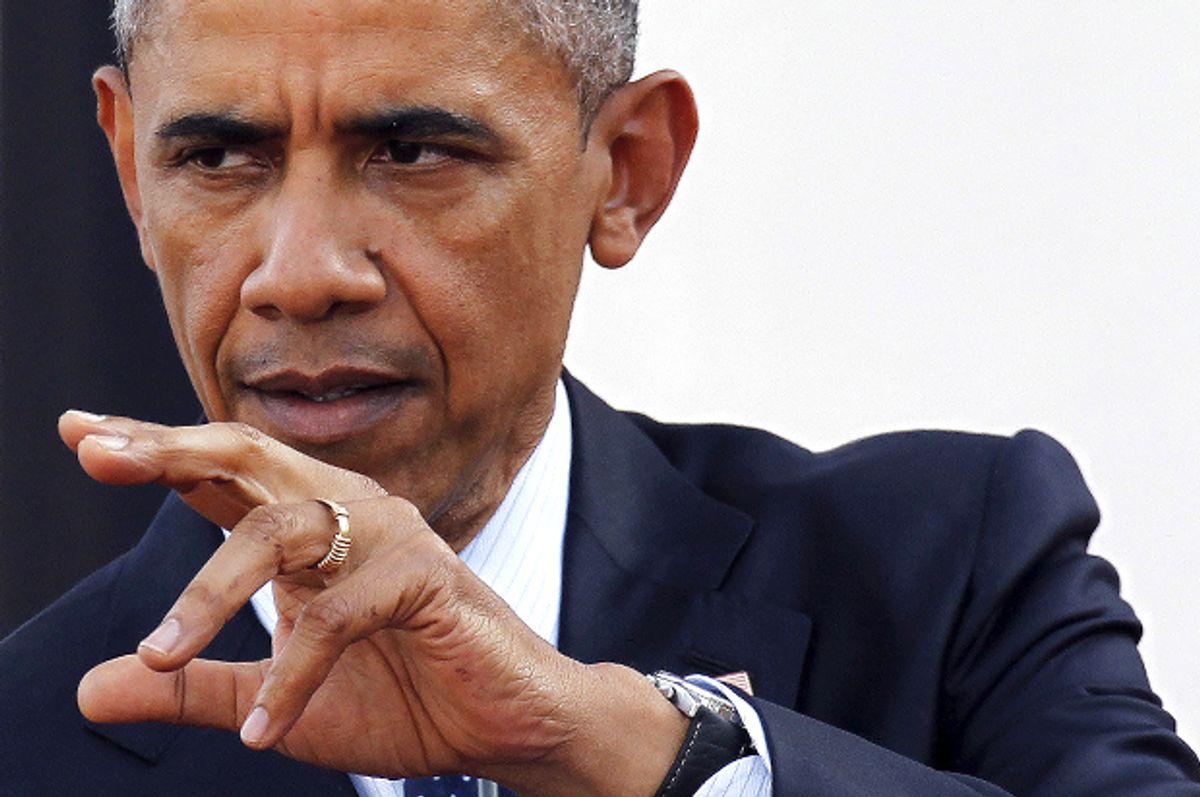 Since the passage of fast-track authority, the biggest obstacle to more corporate-written international trade deals like the Trans-Pacific Partnership (TPP) has not been unions or environmentalists or public health advocates. It’s been the calendar. And jostling by TPP member countries over domestic priorities may have just created such a calendar problem that we will not see a deal completed by the end of the Obama presidency.

Ministerial meetings in Maui last week were supposed to end in an agreement between the 12 nations negotiating TPP. But those talks broke up on Friday without a breakthrough. Officials played down the differences, claiming that anywhere from 90 to 98 percent of the details have been finalized. But the outstanding issues involve the basic building blocks of a trade agreement -- specifically, what industries get tariff elimination and unfettered market access, and which remain protected.

For example, the U.S. wants to protect profits for the pharmaceutical industry by increasing exclusivity times for prescription drugs, including lucrative biologics that often cost tens of thousands of dollars per treatment. Generic drug manufacturers would not be able to make cheaper knock-off versions for 12 years, a much longer exclusivity period than the current standard in TPP partners like Australia, Chile and New Zealand. Those countries have rejected intellectual property barriers posted for the benefit of large drug companies.

Other stumbling blocks concern major industries. For example, the U.S. won’t open up its sugar trade. Japan wants to limit access to its rice markets. New Zealand is seeking lower tariffs for the Canadian dairy market. Japanese carmakers want to continue to source auto parts from non-TPP countries like Thailand, but Mexico and Canada want that supply chain to end.

Add to that still-unresolved pieces over labor standards and other agricultural matters like beef and pork, and it doesn’t sound like only a few loose ends need to be tied up -- especially when ministers were reduced to touting agreement on trifles like “geographical appellations,” such as whether sparkling wine from places other than the south of France can be called champagne.

The biggest hint that TPP’s completion isn’t happening anytime soon comes in the short joint statement from ministers upon conclusion of the Maui talks. They vow to “continue work on resolving a limited number of remaining issues,” but they conspicuously do not say when.

Japan’s economic minister said talks should resume in late August, but other media outlets claimed they wouldn’t until November. The discrepancy can be explained by news out of Ottawa this weekend: Canadian Prime Minister Stephen Harper called elections for October 19, and with important implications in TPP for Canadian dairy farms and beloved state-run enterprises like the CBC and Canada Post (both of which may have to be privatized under the agreement), he would not want to ignite controversy by signing a major trade deal in the middle of the campaign. The chance of August negotiations is made more remote by polls showing the Canadian electorate ready for a change.

If TPP talks don’t restart until November, the timeline slides into elections in the U.S., exactly what President Obama had been trying to avoid. Under fast-track rules, the government must publish the complete text of any trade agreement 60 days before signing. So even completion of TPP in November -- and there’s no guarantee of that -- would mean that signing wouldn’t take place until next January. And after that, there are reporting requirements that must take place before the White House can introduce the bill in Congress, which could mean another delay of at least 90 days. At that point, Congress has 90 session days to act on the implementing legislation.

So you’re talking about a series of TPP votes in Congress right in the middle of both the presidential race and Congressional primaries, a distasteful scenario for members who don’t want to draw an angry challenger because of their trade vote.

Trent Lott was famous for saying that trade deals don’t pass in even-numbered years, when the public might be paying attention. The White House would have been thrilled to get TPP done in the dead of winter, preferably over the holidays while everyone was consumed with tree-trimming and shopping. But that’s not going to happen now, which could lead the U.S. to shut down TPP completion until after the 2016 elections. And when you’re dealing with 12 countries, it’s hard to find a sweet spot for a trade deal you can’t sell at home and would rather hide from the public. Australia must hold elections by January 2017. New Zealand will vote in the fall of 2017. And there are local and regional elections throughout this time.

TPP has been declared “dead” far too many times for anyone to expect this failure in Maui to be its final demise. Outside of Bernie Sanders and perhaps Donald Trump, it’s likely that every other presidential candidate would support the trade agreement and work for its eventual passage. It’s entirely possible that the parties accelerate the process and, Canadian elections notwithstanding, press through to conclusion.

But extending the clock adds a bit of unpredictability into a process with a heretofore more predictable ending. What if a change in leadership in Canada causes them to bolt from the agreement? What if Hillary Clinton, worried by the Sanders juggernaut, makes a public vow to stop TPP? What if labor succeeds in picking off a couple Congress members who voted for fast track? What if Australia or New Zealand walk away over the pressure to change their pharmaceutical rules or the controversial investor-state dispute settlement process?

A lot can happen over the next several months, or potentially years. And the loss of momentum for TPP could rebound to the other trade agreements the Administration wants to finish, like the Transatlantic Trade and Investment Partnership between the U.S. and Europe, or the massive 51-nation Trade in Services Agreement.

This is what happens when world leaders try to make deals they know their populations will detest. Apparently the last threads of democracy remaining are strong enough that, sooner or later, these same leaders must stand before their people and defend gutting regulations, selling out their sovereignty and benefiting multinational corporations instead of the public. It’s apparently hard to find a good time to do that.