What if the Democratic presidential primary were as bizarre as the GOP one currently is?

How would Hillary Clinton fare against an insurgent campaign by beloved media mogul Oprah Winfrey? 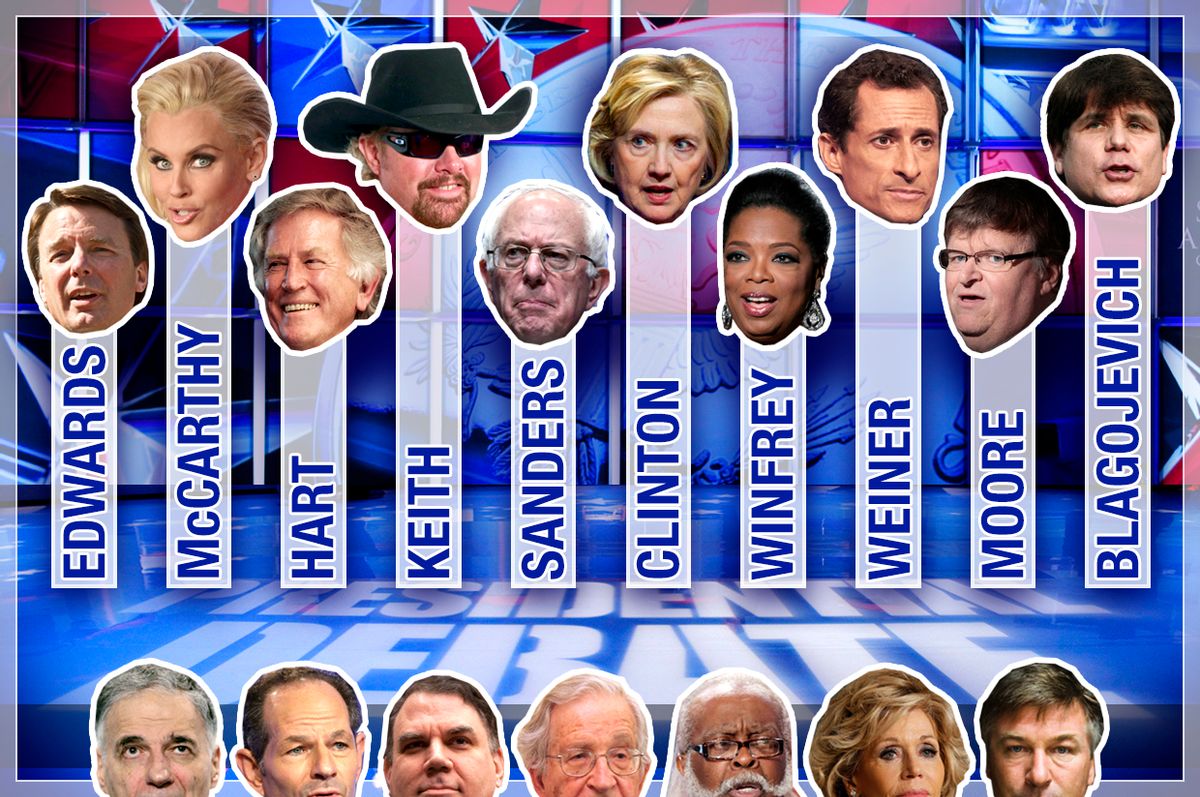 The Democratic National Committee and MSNBC announced Wednesday afternoon the name of the 10 candidates who will be participating in the first Democratic presidential debate of the 2016 electoral season. Only the top 10 candidates in the most five most recent polls will be allowed to participate in the debate, which will be moderated by MSNBC's Rachel Maddow, Chris Matthews, and PBS's Gwen Ifill.

The meteoric rise of media mogul Oprah Winfrey (23%) is posing a threat to both establishment favorite Hillary Clinton (13%) and insurgent socialist Bernie Sanders (11%), both of whom must be concerned with what the beloved Chicago politician-in-training might say given that she's vowed to "hurt anybody" who criticizes her.

Rachel Maddow told Politico's Dylan Byers that MSNBC has a secret plan to prevent Winfrey from dominating the debate, but declined to outline it in specific detail. "Rest assured," she said, "it's magnificent."

Joining that triumvirate on the Cleveland stage will be a trio of formerly disgraced politicians who have managed to resurrect their careers in light of the multiple indictments against Hillary Clinton for her role in Benghazigate. Anthony Weiner (7%), Rod Blagojevich (6%), and John Edwards (5%) all hope to escape the shadow of their own comparatively minor failures by hiding in the massive one currently threatening to engulf the Clinton campaign.

Some of the more entertaining candidates with whom they will share the stage are the fading Michael Moore (3%) and the ultimate single-issue candidate, Jenny McCarthy (2%), who will no doubt seek to educate the Toby Keith (1%) and Gary Hart (1%) about the dangers of childhood vaccination. Keith and Hart, meanwhile, will do their best to justify their continued existence during the main event.

As for the undercard battle, it will occur two hours earlier, and include the seven candidates who failed to make the cut. As they all polling below 1%, it's unlikely that any of them will become a serious contender. However, pundits have noted that the absence of Winfrey may provide them with an advantage, as their debate actually has a chance about being about them.

Noam Chomsky and Alec Baldwin are the most notable names who will be participating -- although the Democrats know better than to ever count Ralph Nader out, or at least count on him not to play spoiler. However, insiders are saying that Eliot Spitzer's experience in a court room could provide him an advantage over Jane Fonda and Jimmy "The Rent Is Too Damn High" McMillan, both of whom are following in McCarthy's single-issue footsteps. This may even be the evening someone informs Fonda that war in Vietnam is actually over. Could that someone be former Florida congressman Alan Grayson?

You'll just have to tune in to find out.