Is the self-described guardian of Israel risking his leadership because he believes God speaks through him? 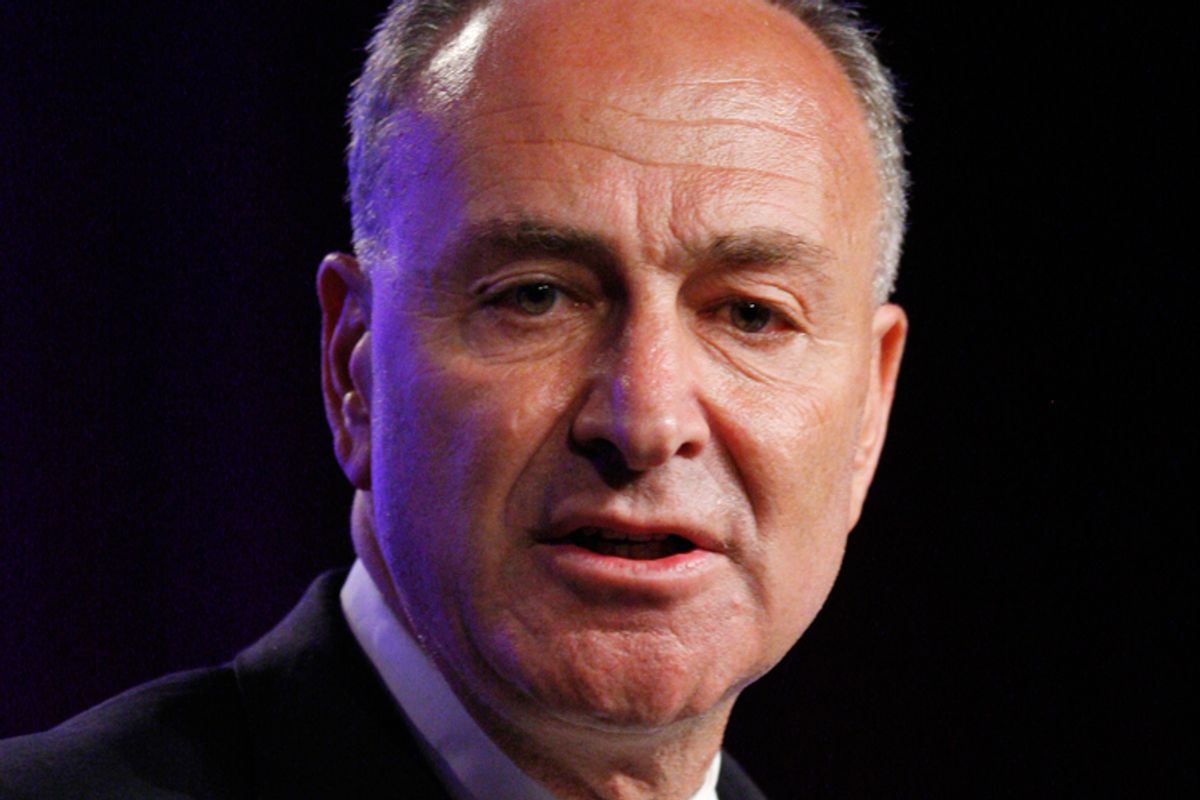 Throughout history, kings, sultans, popes and commanders in chief have claimed to hear the voice of God in matters of war and peace.

From Pope Urban II’s cry of “Deus vult!” (God wills it!) in launching the Crusades in 1095, to George W. Bush’s alleged claim, in 2003, that God told him, “George, go and end the tyranny in Iraq,” history is replete with leaders who acted because they believed God spoke to them directly and told them what to do.

Is a sense of divine responsibility at work in Sen. Charles Schumer’s opposition to the Iran deal?  Is the senior senator from New York breaking with the Obama administration, risking his rise to the leadership of the Senate Democrats, in part because he believes God speaks through him?

Sen. Schumer, of course, said nothing of the kind in his nearly 1,700-word statement opposing the Iran deal, released Thursday evening.  Rather, he emphasized, his reasoning was grounded in “carefully studying the Joint Plan of Action.”

Yet in a revealing radio interview in 2010, the United States senator indicated he believed God had chosen him to be a guardian of Israel.  “[M]y name, as you know, comes from a Hebrew word,” Schumer said to Nachum Segal, founder of “the Jewish world’s premier English-language internet radio network.” The Hebrew word, Schumer said, is “shomer, which means guardian. My ancestors were guardians of the ghetto wall in Chortkov [in the Ukraine] and I believe Hashem [God], actually, gave me that name, as one of my roles that is very important in the United States Senate [is] to be a shomer for Israel.  And I will continue to be that with every bone in my body.”

On its face, despite some theological differences, this statement is similar to the claims of certain evangelicals who say their call to leadership came directly from God.  In 2007, Mike Huckabee said the (momentary) surge in his presidential run came from “the same power that helped a little boy with two fish and five loaves feed a crowd of five thousand people.” Two decades earlier, Pat Robertson said he believed “God had called me to win” in the Republican primaries against George H.W. Bush.

Citing divine guidance for action in defense of the nation – in Schumer’s case, a foreign nation – is enough to unsettle defenders of the separation of church and state.  “We do think that the media … would probably flip out if Palin said God had a special plan for her in government,” wrote Dan Amira in a New York magazine post, “Is Chuck Schumer on a Mission from God to Protect Israel?”

Schumer’s 2010 remarks were grounded in his criticism of the Obama administration’s public pressure on Prime Minister Benjamin Netanyahu’s government to cease Jewish settlement construction in East Jerusalem.  On a visit to Israel, Vice President Biden had pledged America’s “absolute, total, unvarnished commitment to Israel’s security,” only to be humiliated hours later by the announcement, from Netanyahu’s office, of the construction of 1,600 new housing units in the would-be future capital of a Palestinian state.  Secretary of State Hillary Clinton called the timing “insulting,” which in turn insulted Sen. Schumer.  “I called up the White House and I said, 'If you don’t retract that statement you are going to hear me publicly blast you on this,'" Schumer said.

Schumer’s 2010 threat to “blast” the Obama White House, driven in large part by his self-assigned role as “a shomer for Israel,” raised a few eyebrows at the time.  One commentator suggested his threat to the administration “gets to the edge of sounding as if he is more a Senator working in the Knesset than working in the United States Senate.”

Five years later, in the wake of Schumer’s pledge to vote against the Iran deal, the senator from New York is again drawing suggestions that he is motivated more by loyalty to Israel than to U.S. interests.  This prompted Tablet, an online magazine, to declare: “Accusing Senator Schumer of loyalty to a foreign government is bigotry, pure and simple … a direct attempt to play the dual-loyalty card.”

Such accusations often serve as cudgels to silence legitimate questions about whose interests are being served.  At a June speech in Washington, two months before he rejected the deal, Schumer took on the question directly. “I have to do what’s right for the United States first of all, and Eretz Yisrael [the land of Israel] second,”  he told the audience at the Orthodox Union.  Yet he added that a theoretical agreement with Iran that had a 95 percent chance of success would likely be opposed by Israelis and “many Americans Jews,” because of the potential “existential threat to Israel.”  This, and Schumer’s self-regard as a shomer chosen by God, raise legitimate questions about his motivations in rejecting the Iran deal.

Perhaps no one but Charles Schumer can say if he truly believes he was chosen to be one of God’s guardians.  Divine inspiration aside, other reasons may lie at the heart of his decision.  Supporters say he was simply acting on his conscience and in response to concerned constituents. Yet his alliance with the pro-Israel lobby, in particular AIPAC, cannot be ignored. Both AIPAC (despite its revisionist history) and Schumer advocated for the war in Iraq, and both now oppose the Iran deal, which AIPAC is spending tens of millions of dollars to scuttle. The lobbying group sent dozens of activists to Schumer’s office in an effort to influence him.

Now both Schumer and AIPAC face uncertain consequences from an emboldened Obama administration no longer so cautious regarding the politics of Israel or its American lobby. At his recent speech at American University, the president said that “many of the same people who argued for the war in Iraq are now making the case against the Iran nuclear deal” – presidential comments that would have been hard to imagine even a year ago. Obama may be bolstered by several (though not all) polls showing that most American Jews support the Iran deal.

As for Sen. Schumer, he is now linked by many Democrats to the Republican critics of the agreement, whom Obama criticized as “making common cause with hard-liners in Iran.”  Moveon.org, the advocate of progressive Democratic causes, has announced a “donor’s strike” to withhold up to $10 million in contributions to Schumer’s 2016 Senate campaign.  More important, current and former White House aides now openly question whether Schumer is fit to replace the retiring Harry Reid as Democratic leader of the Senate in the coming year. In that fight, if it comes, AIPAC, Israel and even God may not be able to help.