David Beckham is right to fire back at parenting scolds: "Think twice about what you say about other people's children" 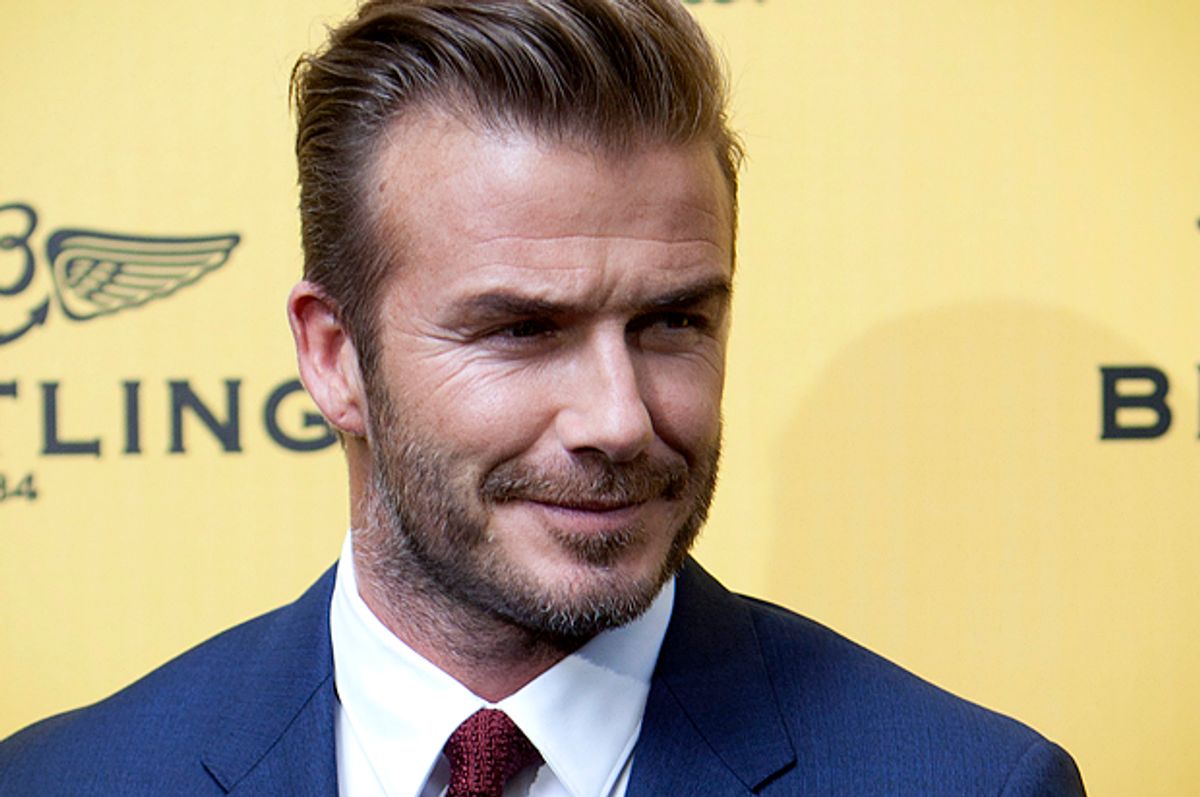 New Kickstarter idea: We create a David Beckham bot to fire back whenever some busybody concern trolls a parent over something that's completely none of their business. Who's in?

Mr. Posh Spice was this weekend scolded by the Daily Mail for permitting his four year-old daughter Harper to appear in public with a — gasp — pacifier. The paper's "show business reporter" Jemma Buckley mused that the youngest Beckham child is "well beyond the age that most health experts would advise giving a child a dummy [Brit speak for binky]." Why, I've not seen a controversy like this since Suri Cruise's high heels phase — which earned its own HuffPo vertical.

Buckley called upon the wisdom of former midwife Clare Byam-Cook to warn that at Harper's age, "It really can damage her teeth and it is very likely to hinder speech development. David and Victoria seem wonderful parents and I'm sure they give Harper lots of attention but, like it or not, they are role models and lots of people will see this and think that having a dummy at this age is normal when it is not."

Remember that five years ago, Byam-Cook sparked controversy in the UK for reportedly pronouncing that "Breast milk beyond the age of two isn't necessarily good because it's very, very sweet. The fact that it's breast milk doesn't make it any different to a glass of Coca-Cola."

Speaking with the Mail, she added, "It could be last child syndrome – because she is the youngest David and Victoria could be clinging on to her being a baby."

Gosh, for a moment I thought they wouldn't be able to work in a direct dig at the emotional state of the parents, but dammit, the Daily Mail always comes through. The Mail also found fellow expert, author Sue Atkins, to chime in that "It is an easy option for parents, because if you give them a dummy they shut up and are quiet. It's the same as giving them an iPad really." I'm going to remember that the next time my teenager asks for an iPad.

Beckham could have simply brushed off the piece, but instead he took to Instagram to present his side. Posting a shot of the Mail story on Monday, he asked, "Why do people feel they have the right to criticize a parent about their own children without having any facts?? Everybody who has children knows that when they aren't feeling well or have a fever you do what comforts them best and most of the time it's a pacifier so those who criticize think twice about what you say about other people's children because actually you have no right to criticize me as a parent …" Go get it, Becks.

If another person's child is actively doing something that could be considered disruptive or dangerous — and you know, things like that actually happen often enough to give troubled Daily Mail scribes PLENTY of material — sure, feel free to take a stand. Or if someone has a general question, to a pediatrician or the like, about parameters around developmental milestones, yes, why not offer some guidelines? Otherwise, here's my own expert advice: Keep it shut.

Parenting is a veritable minefield of opinions. Every aspect of child rearing — from birth itself to breastfeeding to sleep training to vaccinations to schooling — is fraught with conflicting advice. Most of us are just doing the best we can. Harper's pacifier is a handy metaphor, because I doubt there's a parent alive who has not at some moment or another given a child the thing most needed to simply make him or her calm and happy -- whether it was organic and sustainably made, precisely age appropriate or not. That's how it works in the real world with our real children. We let them sometimes stay up past their bedtimes or skip baths or eat chicken nuggets or wear traditional, sex role conforming costumes and so the hell what? Our kids are unique. Our days are all different. It's good to have rules, but it's more necessary to have flexibility.

But if you're advocating for ditching "dummies," I'm all for that. Can we start with the Daily Mail?