You Must Hear This! Margo Guryan's "Sunday Morning" 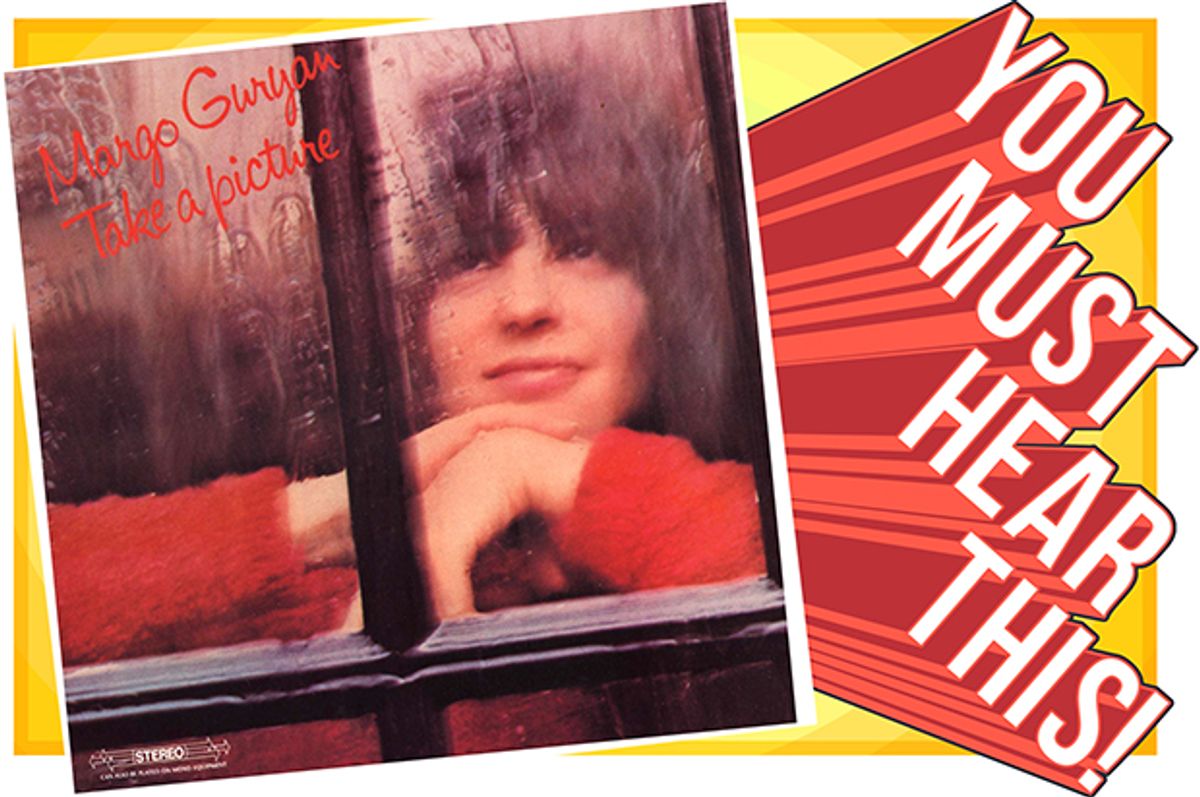 When Margo Guryan recorded her debut album "Take A Picture," she was already well established as a songwriter, having written songs recorded by the likes of Harry Belafonte, Jackie DeShannon and Claudine Longet. It definitely shows. The songs have a kind of effortless complexity to them – off-kilter by design – that hooks you instantly.

The song "Sunday Morning," in particular, is one of those songs that grabs first and then stands up to repeated listens. From the opening tumble of drums to the sing-song fade, a distinct mood is maintained throughout, largely due to John Hill's brilliant production. More on what that mood actually is in a bit.

I communicated with Margo Guryan quite a bit over email and telephone, and found her to be funny, razor-sharp, and very generous with her time. She sent this alternate album cover photo to me, which I love: There were so many unexpected twists in our correspondence that they stopped surprising me after a while. Guess what – one of the engineers of your demo recordings, Warren Schatz, happens to be an old friend and co-worker of mine! What next! Margo, I just learned that you produced one of the songs I'm writing about for an upcoming installment in this series! And so on.

But the thing I really didn't expect was for her to refer to "Sunday Morning" as sexy. She thought it might be too sexy, in fact, for the record-buying public of 1968. I thought at first she might have the wrong song. Mind you – this is not a slight. Though it's true that no person alive wants to be called not sexy, there's nothing cruel in saying it about a song.

Here it is – you can judge for yourself:

You were a very successful songwriter when "Take a Picture" came out.

I wasn't 'very' successful... I'd had a few successful recordings, primarily the Spanky and Oliver records of "Sunday Morning." [My husband] David had taken my demos to quite a few record companies, and their reaction was, "why don't we just record her?" David chose Bell Records because it was a small company with several large successes. I said "OK" because I felt it was a good way to expose my songs.

What were your expectations for the album?

I didn't know what to expect. Mostly, I hoped other artists would hear the songs and, perhaps, record them. I already had a telephone friendship with Harry Nilsson.  He recorded "Think of Rain" but didn't like the way it came out. It was never released. And, though he promised, I never heard it. He gave it to Judy Carne who performed it on "Laugh-In."

You mentioned an earlier "disastrous" recording session for Atlantic?

Some ten years earlier than "Take a Picture," I was signed to Atlantic Records as a singer. I had never been in a studio and I really wasn't a singer. They kept telling me to "sing out," and the harder I tried, the worse it got. I have a range-break at G over middle C that made the session really awkward. Later on, David got girls with lovely voices to sing on my demos, but they had no time and kept converting my 3/4 bars (in 4/4 songs) into 4/4. I pleaded with him to let me try again. He did, and suggested that my vocal be doubled. It worked! All the vocals on that and future demos, and on "Take A Picture," were doubled.

I've read in a few places that you didn't want to tour?

Not only did I not want to tour – I didn't want to perform. When [head of Bell Records] Larry Utall heard this, he stopped all promotion and the record tanked. I saw it in the 39¢ rack in Tower Records in New York.

I assume you wrote "Sunday Morning" on piano.

No 'first' – both music and lyrics together. Always. But I've written words for music composed by others...Ornette Coleman, Gary McFarland... That was easy for me, like working out a crossword puzzle. But I've never been able to write with others. Collaboration just isn't my thing. The guitar track that plays all the way through "Sunday Morning" – it's a phenomenal performance.

All the musicians were terrific! I would say that John Hill got some very terrific musicians together. And I think that was all done in one day.

No, the vocals were probably done later. I remember on "What Can I Give You," Paul Griffin played piano, and I was asked to sing just as a reference – just so the musicians could hear what they were playing to. And Paul Griffin, who I didn't know, came up to me afterward and said, "that's the cutest damn thing I ever heard." And I've never forgotten it, because he's a really sensational pianist.

You described "Sunday Morning" to me as a really sexy song.

I was in David's office at April/Blackwood and we were playing the just-finished demo of "Come To Me Slowly." Also in the office was the comic Len Maxwell. He accused me of writing a "dirty song." We laughed, but I had never thought of that song in this way. And I thought, "I'm going to write a really dirty song." And that turned out to be "Sunday Morning" and I honestly didn't think anybody would record it! And we went in and demoed it, and David didn't feel it was as raunchy as I thought it was. (laughs)

Were there earlier drafts of the lyrics that were more explicit?

No earlier drafts. I just thought that it was so obvious that this was about two people in bed that no one would record it – or play it. I wasn't aware of any songs that were so blunt at the time.

I think I'm with David on this one – maybe I'm just naïve, but it never occurred to me that it was a sexy song. It felt to me more like an innocent lounging-around song.

Well, you're younger! You belong to a generation that's been exposed to a preponderance of sexy...not to say 'dirty' or even 'filthy' lyrics. I'd imagine "Sunday Morning" would be considered tame by comparison. I wouldn't imagine anybody would think it was taboo today!

Margo Guryan resides in Los Angeles, where she continues to write and teach music.