The 10 best movies that take place in one day

So much can happen in 24 hours, as the recent buzz-worthy "Tangerine" and the new "Fort Tilden" show us 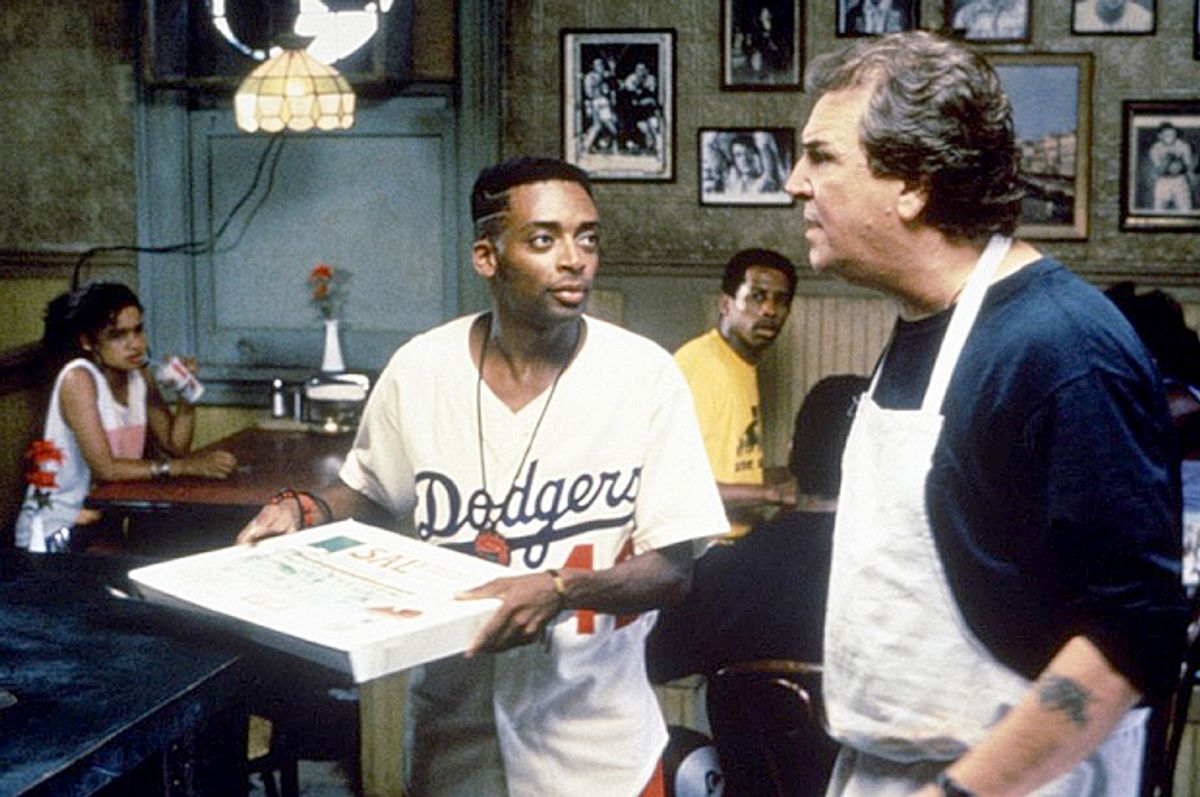 What a difference a day makes. In 24 hours, someone’s entire life can change—either incrementally, or in extreme ways. While films often provide a crucible for examining human nature, there is something heightened when characters face incredible pressure under a same-day deadline. Films that unfold over the course of a single day can take viewers on an intense, emotional journey, but they can also be extremely funny; see “Tangerine," last month's much-buzzed-about film, or “Grandma” when it opens this month.

Opening this weekend is the droll comedy “Fort Tilden.” One night, Harper (Bridey Elliott) and Allie (Clare McNulty) befriend two guys a party, and agree to meet at the titular beach the next day. While Allie should be preparing for her stint with the Peace Corps (she’s leaving for Liberia), she takes the day off because she “deserves one day of happiness before shitting malaria blood.” The resourceful BFFs plan to bike to Fort Tilden but their efforts are met with setbacks, like trying to get an iced coffee, and distractions ranging from shopping sales to finding abandoned kittens. Their so-called “insane journey” is full of deadpan humor stemming from the young women’s awkward encounters with friends and strangers to a truth-telling session that arises after a series of bad decisions. “Fort Tilden” benefits from the rapport of its two leads, who make their friendship and frustrations believable as their day makes them reconsider their goals in life.

While there are many “real time” examples (like the recent “Locke” or the classic “Cleo from 5 to 7”), here are 10 great films that portray characters having extreme transformations as they deal with issues ranging from adultery, abortion and anxiety to murder, love, death and maturation, all over the course of a single day.

Spike Lee’s incisive, incendiary masterpiece, set in Bedford-Stuyvesant on the hottest day of the year, remains a landmark film for its cogent depiction of race relations. After establishing the rhythms of the neighborhood, the film culminates with shocking violence that turns into a riot. Sal’s Pizza Parlor, a white-owned establishment in an almost entirely African-American neighborhood, becomes the epicenter of an attack that leaves a man dead and a neighborhood in crisis after simmering tensions explode. The strength of Lee’s work is not just that viewers come to understand each character—from the righteous Buggin’ Out (Giancarlo Esposito) to the racist Pino (John Turturro)—but also care about them. What happens that day deeply affects each of them, prompting the characters (and the viewer) to confront truths within themselves. “Do the Right Thing” remains as potent today as it was when it was made.

Alfred Hitchcock’s 1948 “experiment” to shoot an entire movie in a single take yielded this nifty (albeit stagy) thriller that takes place on a single set on a single day. Two students (John Dahl and Farley Granger) murder their friend David (Dick Hogan) and hide his body in a chest that they use to serve dinner to the victim’s friends, family and their clever former headmaster (Jimmy Stewart). Using eight 10-minute rolls of film, Hitchcock created a “single tracking shot” for “Rope,” using the backs of characters’ sports jackets to change reels, mark the passage of time, and ratchet up the suspense.

Harold Ramis’ classic comedy has Phil Connors (Bill Murray), a weatherman, stuck in a time loop as he reports on Punxsutawney Phil, the groundhog who ritually foretells the end of winter by seeing (or not seeing) his shadow. After realizing his situation—and that he can change his actions and thereby affect other people’s seemingly unalterable routines—Phil becomes emboldened. He eventually learns how to seduce his producer (Andie McDowell) and improve his life by getting out of the rut he has been stuck in. “Groundhog Day” amusingly asks the existential question: “What if there is no tomorrow? There wasn’t one today.”

Frank Perry’s canny adaptation of John Cheever’s short story has Ned Merrill (a very fit Burt Lancaster) “swim” his way home, pool by pool—“they form a river all the way to our house” he says—after attending a neighbor’s party. The experience provides an allegory for Ned’s life: every pool “reflects” something about his personal and professional disillusionments and dissatisfactions. His “brilliant or crazy” journey comes to define his suburban alienation and malaise and—if one sees the film as an arch comedy of manners—provides a commentary on propriety. Ned’s determination is noble, and Lancaster makes this “tragic antihero” empathetic as the film’s tone becomes increasingly somber and sobering.

Based on Christopher Isherwood’s novel, Tom Ford’s stylish film portrays George (Colin Firth), a depressed gay man in 1962 Los Angeles still mourning the death of his partner, Jim (Matthew Goode). George proceeds to say some goodbyes, empties his bank account, and plans to put a bullet in his head using the gun he has been carrying around. As he goes about his day, teaching a class and talking with a student, Kenny (Nicholas Hoult), or meeting an old friend (Julianne Moore) for drinks, George remembers Jim and knows he is making the right decision to end his life. But then Kenny reappears at a bar, and their encounter that night might just be his salvation. Ford’s outstanding direction combined with Firth’s interior performance conveys George’s quiet, palpable despair. By the end of the day, he will not be the same.

This astonishing Romanian drama, set during the Ceausescu regime, is a harrowing, unforgettable experience. Gabita (Laura Vasiliu) is 4 months, 3 weeks, and 2 days pregnant. She asks her roommate Otilia (Anamaria Marinca) to help her procure an illegal abortion. The film, directed by Cristian Mungiu, uses a series of artfully composed scenes to capture the emotional and physical suffocation these two young women experience over the course of that single, fateful day. Throughout the day, Otilia must negotiate with doctors and even cajole Gabita. One of the most striking scenes has Otilia solemnly attending a birthday party where everyone but her is celebrating, a powerful metaphor. This astonishing film builds slowly to its remarkable climax, which suggests Otilia is likely more visibly affected by the devastating events of the day than even Gabita is.

George Lucas’ ensemble film, about a group of high school students in 1962 Modesto, California, spending one last night together before many of them head off to college, was a touchstone of 1970s American cinema. The film’s nostalgia factor and its fantastic soundtrack made it a hit, and it inspired many imitators. Four friends hang out at the drive-in, cruise around in their cars, and make decisions about their future. Steve (Ron Howard) tells his younger girlfriend (Cindy Williams) he wants to see other people when he’s off at college and they argue all night; Curt (Richard Dreyfuss) is having second thoughts about attending college, and gets distracted trying to find a woman driver (Suzanne Somers) who may have mouthed “I love you” to him; Terry (Charles Martin Smith) befriends Debbie (Candy Clark) and tries to get some alcohol and connect romantically; and John (Paul LeMat), a drag racer, spends the night driving around with Carol (Mackenzie Phillips), a 13-year-old, much to his chagrin. Each storyline is engaging and the characters are all funny and charming in their own ways; they are all (save 22-year-old John) teenagers. But by the end of the film and the end of the night, they have lost some of their innocence and found a sense of maturity that prepares them for adulthood.

French Céline (Julie Delpy) and American Jesse (Ethan Hawke) meet on a train in Austria and spend the day together, getting to know one another while walking and talking in Vienna. While it could be a prelude to a one-night stand, something about the way Céline and Jesse interact suggests that they really are falling in love. And viewers will fall in love with them. Director Richard Linklater keeps the sexual tension between the characters percolating throughout “Before Sunrise.” And he shrewdly creates a certain ambiguity about “did they or didn’t they” sleep together. While “Before Sunrise” is magical because of the chemistry of the enchanting leads, their 24 hours together wasn’t enough. This lovely film spawned two sequels, “Before Sunset” and “Before Midnight,” both of which—remarkably—captured the same lightning in a bottle.

Greg Mottola’s funny/angst-y comedy takes the idea of the road movie and synthesizes it into one city over the course of one day. When Eliza (Hope Davis) suspects her husband Louis (Stanley Tucci) of having an affair, she asks her dysfunctional family to escort her from Long Island to New York City to confront him. What transpires is a dark comedy in which the characters’ behavior shows them for who they are. As secrets are revealed, they expose who they really are. The humor comes from the abrasive personalities all ricocheting off one another in situations ranging from Eliza’s marital crisis to her mother Rita’s (Anne Meara) health crisis. By the end of the hectic day, everyone’s life has changed—but is that for the better?

Kevin Smith’s outrageous and hilarious low-budget/high-concept comedy, filmed in grainy black and white, chronicles a day in the life of two guys in their dead-end jobs. When Quick Stop convenience store clerk Dante (Brian O’Halloran) has to take a shift on his day off—“I’m not even supposed to be here today!” he moans—he ends up having quite a day. From dealing with irritating customers, to juggling a girlfriend and an ex-girlfriend, and getting into some legal trouble (not his fault!), he needs relief. His best friend Randal (Jeff Anderson), a bonafide shit-stirrer, works at the video store next door, and coaxes him to misbehave by playing hockey on the roof, or taking off to attend a funeral where Randal causes a commotion. “Clerks” mines its laughs from the interplay between the uptight Dante and the reckless Randal, but also from the events that unfold during the day that prompt Dante to re-evaluate his life. If the men are no better off at the end of their shifts, they certainly are more self-aware, losing their delusions of importance and finding a modicum of self-worth.