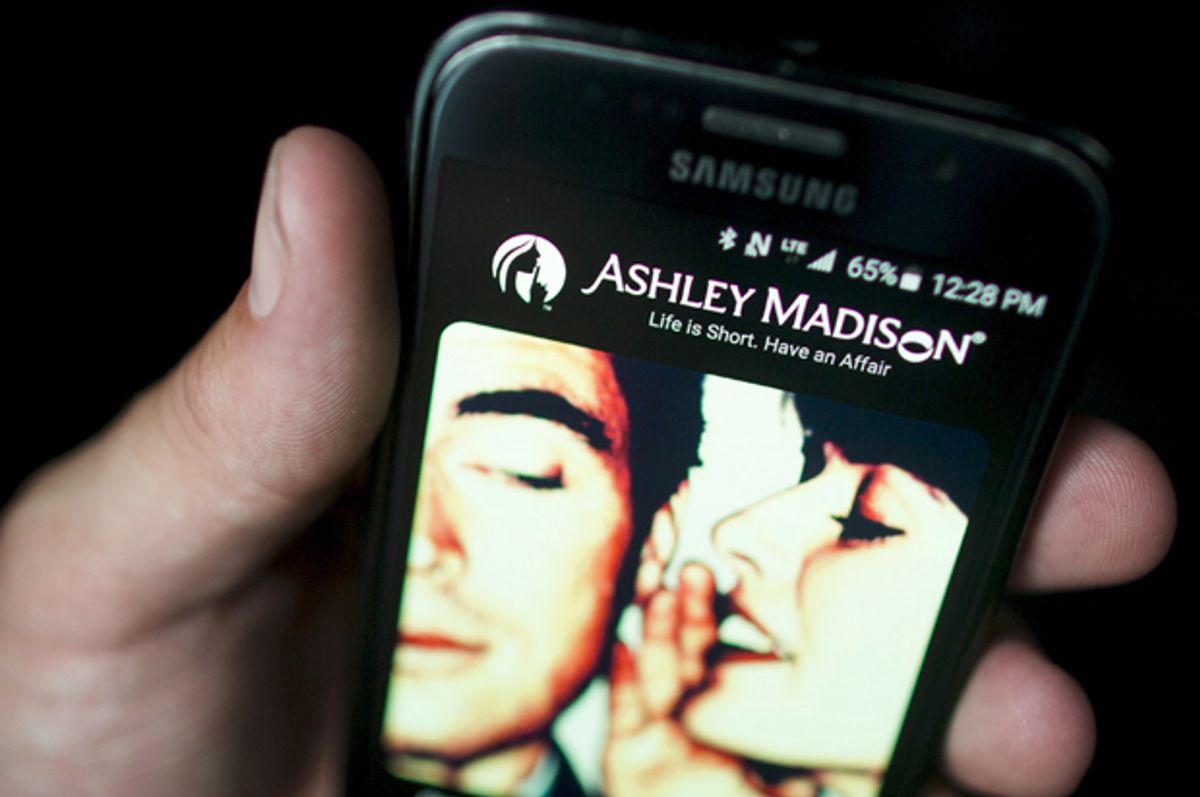 Today in hot takes: Did you know that the Ashley Madison hack revealed that some of the subscribers worked for the fire department? And the military? Yeah, cheating on your wife: Apparently it's not just for golf pros and Christian reality TV stars/sex abusers.

As the bottomless feel-bad story of the summer continues to unfold, media outlets have been scrambling for deeper meaning in the flaming garbage pile data. And within that rich trove of names and email addresses, there are some clear implications that lots of subscribers to a site devoted to facilitating affairs are… regular old public servants. What does it SAY ABOUT SOCIETY?

Local outlets have been falling all over themselves with similarly-themed reports — a Kentucky news site reveals that "A retired Mason County teacher says… he was as shocked as anyone to learn his name has been tied to the website, which encourages cheating on one's partner." Yeah, you'd better justify yourself, retired teacher person! And 7 News Denver ominously reports that "Logins from the Ashley Madison hack include Colorado state, city and school district email addresses."

What's the implication here? That park rangers and government workers have been cruising for hookups on their work time and that this is a scandalous misuse of our taxpayer money? I don't think so. I get that for members of the military, infidelity is an ethics breach and potential conduct offense. But for anybody else, so what? Do we really think that someone is going to, say, not put out a fire because he's too busy checking on Ashley Madison? Are we concerned that his presence on Ashley Madison in some way limits his ability to put out a fire? Or is it instead that on some level, the real implication here is that school teachers and park rangers are somehow supposed to be better than that?

It's one thing when a known gross person like Josh Duggar is exposed as a cheater. There's a payoff of expectations there. It's unsurprising when a politician or athlete or just a standard issue Wall Street d-bag is found out to be behaving in a morally questionable manner. The idea that your mailman or your kid's teacher might be? Ew, right?

Frankly, Jennifer Weiner sums it up best in her Friday op-ed for the New York Times — what all of this really proves is that far too many Americans are "too dumb to cheat." Citing the "32 million would-be philanderers, many of whom were stupid enough to use work emails for the purposes of philandering," Weiner asks, "How, I ask you, can a country be great when its government workers aren’t smart enough to scurry over to the anonymous embrace of Hotmail and Yahoo when they want to cheat?" Preach!

Here's another thing — We don't know how many of those email addresses exposed in the hack are legitimate. Here's another — We don't know the private negotiations of anyone else's relationships. Not every couple is sexually exclusive, and the assumption that anyone who isn't strictly monogamous is a "cheating dirtbag" is presumptuous and prudish. Here's one more — Who cares? It should be pretty clear based on the way the world was functioning just a few days ago that we don't actually need to know about other people's private sex lives to function as a society. And ultimately, it shouldn't matter to anyone but your partner how you conduct your private life, whether you're a governor or a rock star or a mail carrier.