Gun crazy: America's love of guns is deeply coded in our national myth -- and we can't change until we face that

From John Wayne's cowboys to violent anti-heroes, we cling to the stubborn, distorted morality that defines us 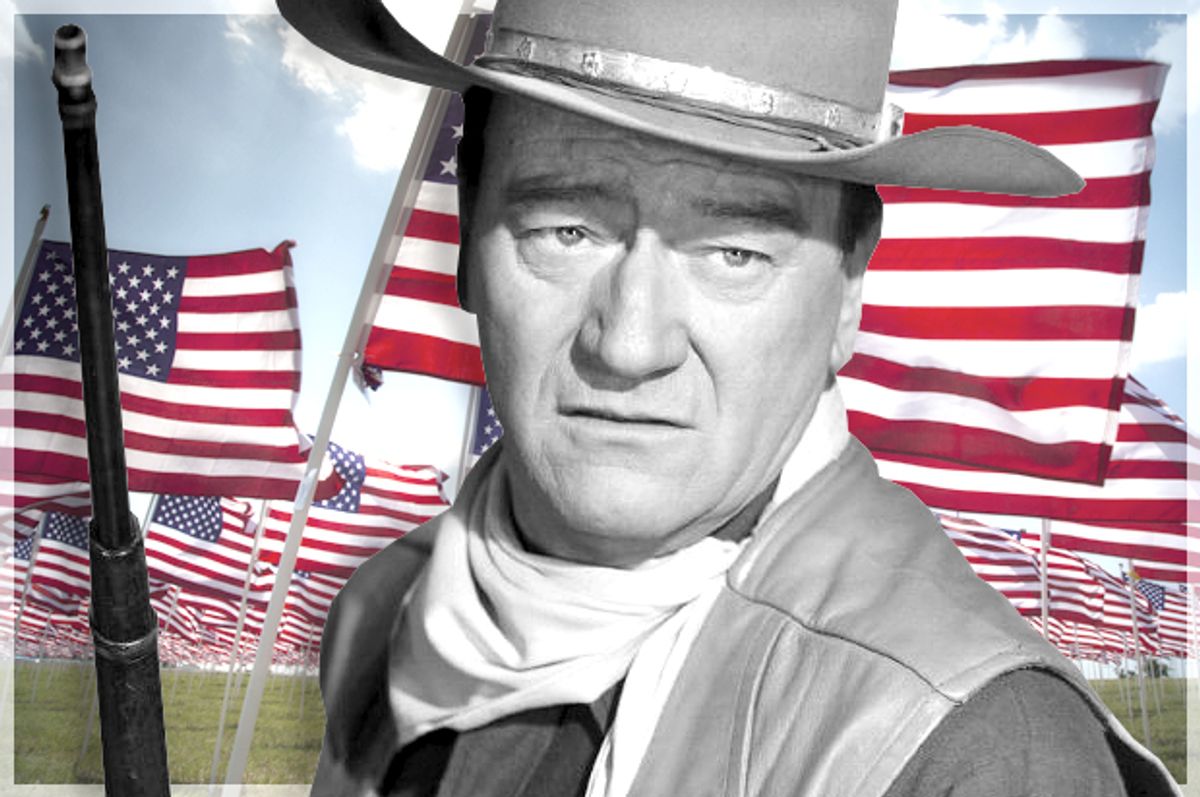 You don’t need me to tell you that America is crazy on the subject of guns. (That’s not the only symptom of our national insanity, to be sure. But it’s a big one.) We are crazy about guns, and guns have made us crazy. It’s a perfect circle. Gun madness has fueled a diseased, self-loathing and self-mythologizing culture with a genocidal past, a suicidal present and no apparent future. Americans are literally killing ourselves with guns, and under the surface we half-suspect we prefer going out like Bonnie and Clyde to facing the uncertainties of life in the 21st century when we’re no longer the center of everything. If we can’t have guns, we don’t want nobody, baby.

We certainly didn’t need Wednesday morning’s murders of TV news reporter Alison Parker and cameraman Adam Ward in rural Virginia to remind us of our nation’s gun madness. It was an especially grotesque exclamation point with a strong flavor of symbolic significance, but in the larger context of American bloodshed it was in no way an unusual event. Every homicide is a preventable tragedy that leaves trauma and heartbreak behind it, and every gun murder doubly so. But if we assume that Wednesday was a typical day in the United States of America, then something like 28 or 29 other people were shot dead by their fellow citizens without making the headlines. (Another 58 or so people killed themselves with guns, shocking evidence of a violent epidemic we hardly ever talk about.)

Of course those other shootings presumably did not happen on live television, and the alleged gunmen presumably did not post auto-play footage of the killings on Twitter a few minutes later. That quasi-fictional contemporary flavor is exactly what made Wednesday morning’s incident front-page news around the world. As Grantland columnist and film historian Mark Harris posted on Facebook, we now seem to be living in the final act of “Network,” Sidney Lumet and Paddy Chayefsky’s prescient media drama from 1976.

As with any media-centric news event where the symbolic elements threaten to overwhelm reality, this gruesome episode will be interpreted as confirmation of existing views. European social democrats and evangelical Christians will hold it up as evidence of our culture’s unique depravity, although with differing explanations of the underlying causes. Racist trolls will surely focus – and have already done so! – on the fact that the alleged shooter was an African-American man apparently fueled by a sense of racial grievance. (If all the black people who encountered racial discrimination in the workplace, or who believed they did, started shooting their white co-workers … honestly, I don’t have the heart to imagine the resulting panic.)

There’s no denying the horrifying allure or the impacted layers of potential meaning in this event, but it doesn’t tell us anything we didn’t already know. (I have watched Islamic State beheading videos, on the premise that they were cultural and ideological texts constructed for a purpose, and I had a responsibility to evaluate them. So far I have not forced myself to watch the footage of the Virginia shootings, and I think I’m OK with that.) America’s relationship with the gun is profoundly damaging and unhealthy, and a large proportion of the population – probably a majority – would like to do something about it. But guns are so widespread in our society, so strongly identified with our national myth and so well defended by entrenched ideology and ruthless political strategy that it’s almost impossible to imagine what that something might be. So everyone will use this orgiastic media moment for their own purposes, and nothing much will change.

I suppose it’s a good thing that fence-straddling Democrats like Hillary Clinton or Virginia Gov. Terry McAuliffe, who have typically avoided direct confrontation with Second Amendment absolutists or the National Rifle Association, have raised the radioactive issue of national gun-control legislation in the wake of this tragedy. But let’s put the accent on “suppose,” because we’ve been here before, many times over. After the Charleston church shootings in June, President Obama displayed a level of public emotion he typically avoids – and the principal elements of that emotion were anger, frustration and disbelief.

“At some point, we as a country will have to reckon with the fact that this type of mass violence does not happen in other advanced countries,” Obama said, in what was widely reported as the 14th such statement of sorrow and sympathy for the victims of gun violence during his six-plus years in the White House. He clearly long ago gave up hope that any such moment of reckoning would occur on his watch. So perhaps I can be forgiven for perceiving little more than politics as usual behind Clinton and McAuliffe’s remarks. The former understands that gun control holds strong appeal for the Democratic base; we’ll see how much she talks about it if and when she gets to the general election. The latter is not running for re-election (Virginia governors are limited to one term), has no hope of passing any such laws in his state, and has his eye on higher office.

Many readers may observe that I am reaching for deep cultural and psychological explanations for America’s gun madness and looking past obvious issues of power, money and politics, and let me plead guilty to that right now. Yes, the proximate problem is that the gun lobby and a deranged pro-gun minority largely control the policy agenda of the Republican Party -- and the Republican Party largely controls the political agenda in Washington, despite representing an aging, declining and highly unrepresentative sector of the population. While I mistrust the Democratic Party for what I would argue are entirely valid historical reasons, if you wish to argue that electing a Democratic president and large Congressional majorities to match might at least return some semblance of rationality to the conversation about gun violence, I won’t claim you’re wrong.

But what I’m talking about is the question of why it has been so difficult, verging on impossible, to move the dial on this issue, and why a nutbar minority within a nutbar minority has been allowed to exert its will so effectively. NRA lobbying dollars and attack ads, and Tea Party insurgent campaigns against any and all Republicans who deviated from full-on gun-love orthodoxy, have only succeeded because the seeds have fallen on fertile soil. And that’s where we get to the foundational American myth of the rugged frontiersman protecting his womenfolk from the Injuns; to John Wayne at the end of John Ford’s “Stagecoach,” riding into a future of semi-domesticated freedom with his gal and his Winchester; to the sense deeply threaded into our national identity that we have a special destiny and a special mission, and they must be defended by force.

It is beyond naïve to pretend that that mythic American sense of self does not exist or does not matter. It is unquestionably present in the text of the Second Amendment, although it requires an enormous leap of imagination to interpret that document as authorizing unlimited private ownership of military weapons. When liberals or leftists behave as if calm discussion and reasoned debate will be enough to uproot the deep, fatalistic poetry of America’s love affair with the gun, and consign it to the history books without a struggle, they come off as whiny, condescending and stupid (and not for the first time).

As journalist Stephen Kinzer puts it in “The Brothers,” his book about the way John Foster Dulles and Allen Dulles shaped postwar American policy, our national history and identity combines a “compulsive oversimplification of the world” with a “determination to project power.” We believe, or rather we know, in the manner of someone who knows he has been reborn in Christ, that we are special, that our nation is “an instrument of destiny, blessed by Providence” (Kinzer again). Whatever we do, we do for the ultimate good of the world, and because we are driven by this self-evident sense of purpose. If lesser nations take a different view, that only proves the inadequacy of their vision. Such a moral destiny requires armed vigilance, and demands a price in blood. We cannot address one side of that equation without addressing the other. Since we can do neither, we stand here wringing our hands while the killing continues.