A cynical gag lands with a thud — if MTV's going to take on police brutality, they need sharper satire than this 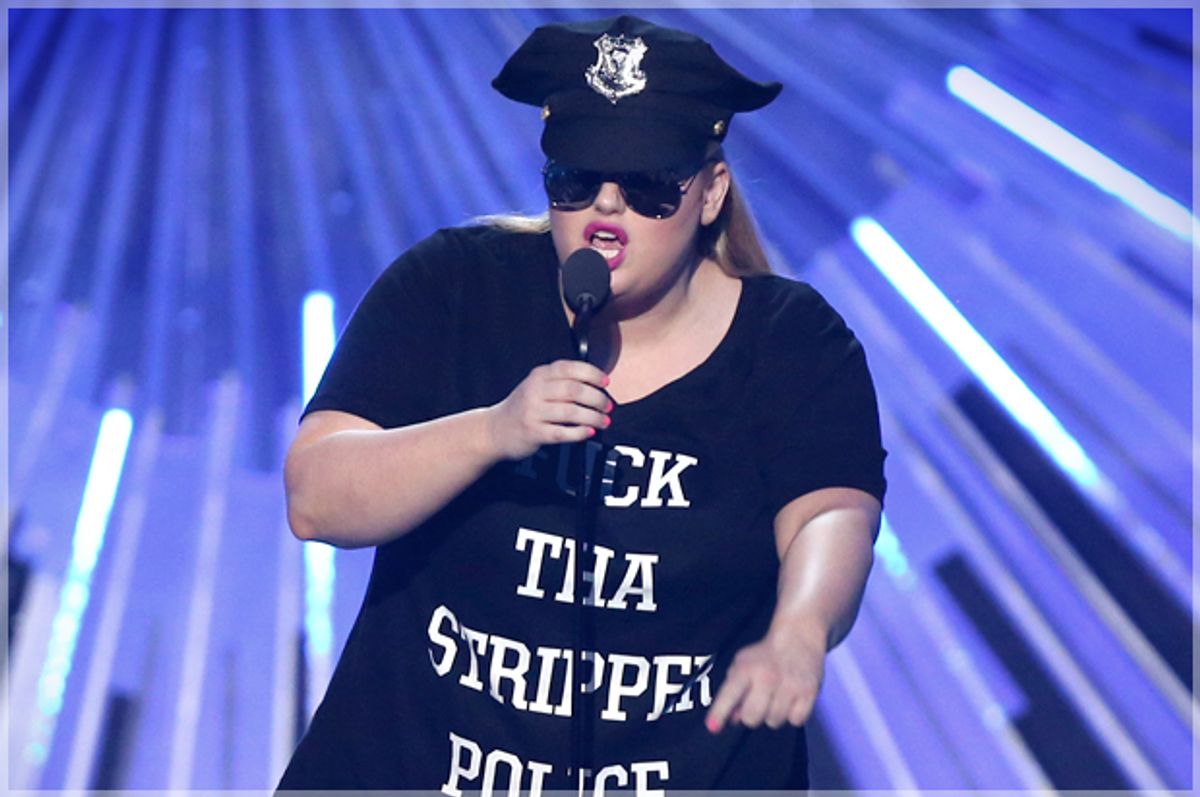 In this rancorous, painful, difficult year, it cannot yet be said enough. My fellow white people: Maybe let's don't. Maybe don't say you're black if you're not. Maybe don't fight for the right to cling to the flag of the side that was fighting for the right to keep humans as property. Maybe reconsider your material when jesting about police brutality. That last one's about you, Rebel Wilson.

From the very start of their 31 year-history, the VMAs have been an exercise in calculated outrage provocation. Madonna writhing in a bustier. Britney with a boa constrictor. Even its seemingly unscripted  moments have landed with an air of some premeditation — Fiona Apple's angst-riddled 1997 acceptance speech, Kanye's notorious, vernacular enhancing 2009 "Imma let you finish." And it so it was that on a night in which in which Nicki Minaj may or may not have cooked up sincere beef with host Miley Cyrus, the verifiably not 29 year-old Rebel Wilson offered her own moment of racial commentary — and it fell absurdly flat.

Wilson, who has previously and audaciously hosted the MTV Movie Awards, was at Sunday's festivities to present the award for Best Hip-Hop Video. Strutting on to the stage in mirrored glasses, handcuffs and a cop uniform, she announced, "I know a lot of people have problems with the police… But I really hate police strippers." She then tore off her ensemble, revealing a shirt that read "F__k tha stripper police," and launched into a monologue on the wrongs of those would knock on your door to deliver "a lap dance that is usually uninspired." She went on to explain, "I hate this injustice. Hence the shirt."

As VMA acts of stirring it up go, it certainly didn't incite the waves of pearl clutching that Miley's 2013 grinding on Robin Thicke did. Instead, it just felt so … so tired. You could immediately feel the waves of NOPE rippling through the crowd, a crowd that had cheered when Wilson ripped off her pants but remained conspicuously quiet when she joked about injustice.

As Time's Dan D'Addario aptly put it, "I've kind of always thought Rebel Wilson 'doesn't really get it,' and I'm finally vindicated." The Daily Dot's Derrick Clifton, meanwhile, boggled, "Rebel Wilson's got her nerve presenting Best Hip-Hop Video while making a joke out of police/state violence." Black Lives Matter activist DeRay Mckesson observed, "Police violence isn't a joke, as the deaths of #TamirRice, #RekiaBoyd, #FreddieGray, #MikeBrown, & #MyaHall remind us," adding, "If the police kill someone you love, would it be a funny joke, then?"

There are few more thankless jobs in the world than explaining why a joke doesn't land — it's the like the proverbial challenge of dancing about architecture. The inevitable defensive response is that hey, it's satire, don't you have a sense of humor? Are you saying some topics can't be joked about? Are you advocating for CENSORSHIP?

So let's be very clear — at a moment in American history when we are witnessing in horror the hideous toll of police brutality — specifically white brutality against unarmed black men and women — humor is its own necessary and highly powerful means of addressing it. Thank God for satire — it's a tool of enlightenment, especially in the moments of greatest darkness. But then make the joke work. Picking a white woman to present a prize for hip-hop, so she could come out and do a little bit in the role of clueless white person — yeah, we get what that joke was supposed to be. It just wasn't insightful or interesting — or funny. And when you're left with a joke that doesn't meet that criteria, what you're left with is just a cynical attempt to turn real and tragic events into a cheap punchline.