Remembering Wes Craven: Freddie Krueger's creator conjured a demon beneath Reagan's America -- and then got trapped in the basement with him 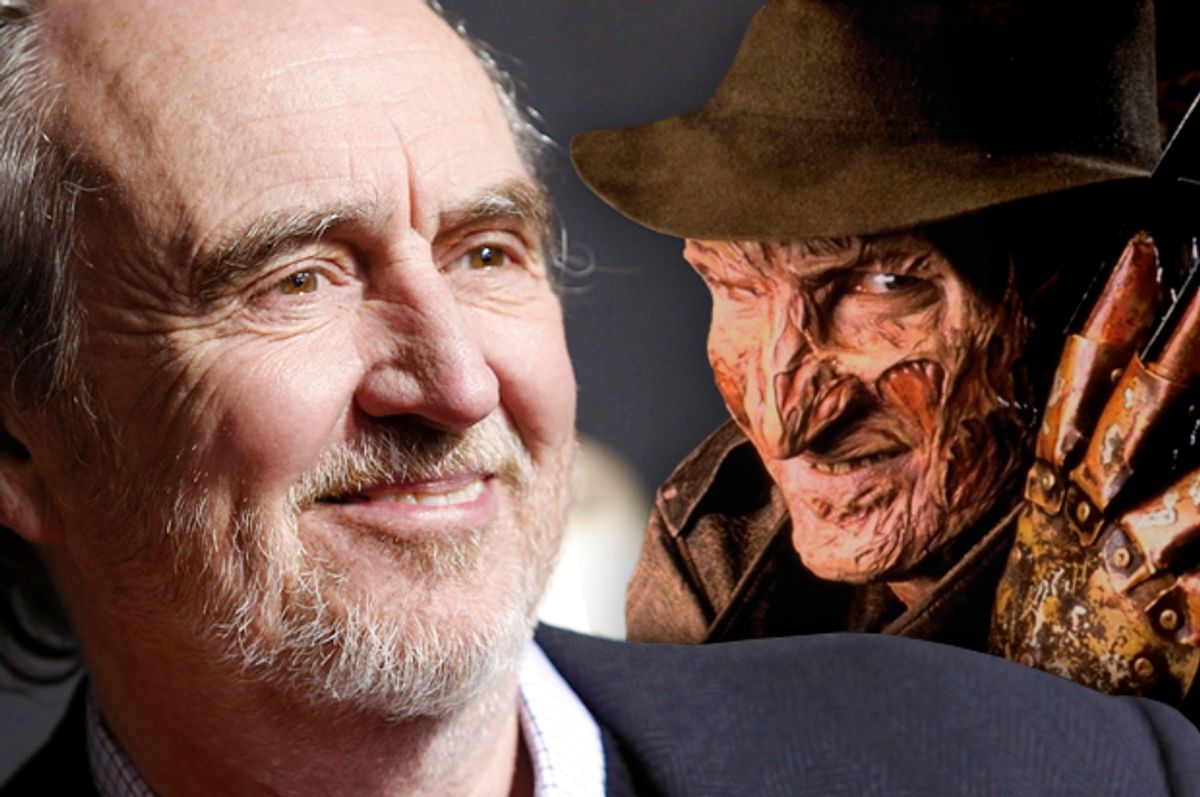 Wes Craven reinvented or at least rejuvenated the horror film not just once or twice or even three times, but on four separate occasions. (The first two came with his crude but vital 1970s grindhouse hits, “Last House on the Left” and “The Hills Have Eyes,” which I’m not otherwise going to discuss here.) That might be the ultimate tribute we can offer to the sincerity and ambition of a filmmaker who spent almost his entire career in the disreputable, low-budget world of horror cinema but never understood that as a limitation. He believed in the possibilities of horror – as cultural commentary, as psychological insight and as Freudian humor of the most unsettling kind – while also embracing its primary commercial function, which was to scare teenagers into one another’s arms on Friday night. One could say that Craven chose not to feel intellectually imprisoned by the horror ghetto or that he had no choice; I’m not sure which is more accurate, and it comes to the same thing in the end.

Craven died unexpectedly in Los Angeles on Sunday, at age 76, not long after receiving a diagnosis of brain cancer. For anyone who grew up amid the movies he made and the legions of imitators and knockoffs he inspired – which is to say anyone who saw any horror films made between the mid-1970s and at least the mid-2000s – it’s a sobering passage. I think we believed, or at least I did, that Craven would always be there to surprise us with a new twist, another off-kilter, inside-out take on the scary movie that would once again vindicate his peculiar Zen blend of craftsmanship and carelessness. It should have been clear long before now that the era that made Craven’s career possible was over, but his sudden death slams that volume of history shut with a bang.

Craven invented Freddie Krueger, the single most important creation of his career and in my book the most potent pop-culture signifier of the Reagan years -- and then got bored with him immediately, allowing the undead child-murdering janitor to drift into Halloween-costume meaninglessness across an endless series of jokey, rococo sequels. Craven’s 1984 “A Nightmare on Elm Street” is only a medium-effective shocker now, because its central cinematic and psychological devices have been so widely imitated. It’s impossible to reproduce the shattering effect it had on so many of us at the time, when ideas about the permeable boundary between dreams and reality, or between the conscious and unconscious mind, had never been so cleverly explored in mass culture. Smack-dab in the middle of a right-wing counterrevolution that transformed American cultural and political life, Craven suggested that the stuff we had repressed was not quite dead and still prowling the cellar, and that it might literally rise up and rip us apart at any moment, right there in our comfortable house on Elm Street.

As Craven would cheerfully have assured us, he had almost no control over Freddie’s destiny. Like most of his films, the original “Nightmare on Elm Street” was effectively work for hire, bought and paid for by New Line Cinema and producer Robert Shaye. Craven received a “based on characters created by” screen credit throughout the ensuing series, but only worked on one of those movies (as a co-writer of “Nightmare on Elm Street 3: Dream Warriors” in 1987) and didn’t direct any of them. When Craven and writer Kevin Williamson launched the “Scream” franchise in 1996 – the first horror-movie series whose characters are steeped in horror-movie tropes – they were often credited with introducing postmodernism to the genre, which isn’t true at all. In terms of Craven’s career, it might be more fruitful to understand the “Scream” movies as commentaries on the world Freddie Krueger had made, on the way Freddie and all his acolytes and copycats had reshaped the realm of pop culture and the internal consciousness of horror movies.

Craven did not lose control of the “Scream” franchise, but maybe he should have. Or at least he should have let it go after two or at most three installments, instead of allowing it to degenerate into a self-parody of a self-parody. Unfortunately, “Scream 4” in 2011 was his final film as a director, which underscores all too clearly that Craven had certain artistic limitations he could never overcome. Of the “three C’s,” the trio of very different filmmakers who revolutionized horror in the 1970s – the other two being John Carpenter and David Cronenberg – Craven was by far the least successful in stretching outside the genre. Carpenter’s best movies went well past horror into dystopian science fiction and Marxian political critique, while Cronenberg left horror behind in the last century in favor of arch cultural allegory and literary adaptation.

Meryl Streep got one of her kazillion Oscar nominations for playing an inner-city music teacher in Craven’s insipid 1999 drama “Music of the Heart,” but no sign of his puckish wit can be discerned in that picture, nor of his offhand ability for psychological penetration. Until looking at Craven’s IMDB page today, I had forgotten that he directed Eddie Murphy’s would-be hit “Vampire in Brooklyn” in 1995. It’s fair to describe that as a willful and culture-wide act of oblivion; I’m pretty sure Murphy and Craven tried to forget that movie too. Craven often said in interviews that he had been inspired to make movies by the legendary art-house cinema pioneers of the ‘50s and ‘60s, but the only times he ever got close to emulating idols like Ingmar Bergman or Federico Fellini was in his horror movies, not his more mainstream Hollywood efforts.

If “Nightmare on Elm Street” was by far Craven’s most important and influential film, and the first “Scream” his second (with “The Hills Have Eyes” a distant third), I hold a special place in my heart for one of his supposed failures, the strange and self-referential “Wes Craven’s New Nightmare” from 1994. It’s a sequel to the “Nightmare” movies, and yet not really a sequel at all. If the “Scream” movies are postmodern mockery or meta-commentary, “New Nightmare” is an attempt at serious literary postmodernism. It’s as if the Freddie franchise had been inadvertently handed over to Italo Calvino or Paul Auster, and I would hazard a guess that the influence of this little-noticed film among budding horror geeks and future 21st-century filmmakers runs much deeper than has ever been recognized.

Why and how Craven got to make “New Nightmare” I have no idea, but it’s a movie I will eagerly watch again any time it reappears on cable, and get something new out of it with each viewing. Craven and producer Bob Shaye and actors Robert Englund and Heather Langenkamp, along with other people associated with the Freddie franchise, appear as themselves, haunted by the possibility that the vengeful knife-fingered specter they have viewed as a laughable but lucrative fiction for so long has actually been conjured into existence because they made movies about him. This elaborate premise doesn’t pay off evenly throughout the picture, and it was far too complicated a joke (if it is even a joke at all) to connect with the cultural marketplace of the mid-‘90s. Craven retreated behind the more rigorous and more profitable ironic scrim of “Scream,” and reshaped horror for the last time. But “New Nightmare” was the most personal film he ever made, and the one that gives us the clearest insight into his genius.