James Bond author's absurd Idris Elba diss: Why there's no such thing as "too street" to be 007

Daniel Craig promises a less sexist Bond, while an author dismisses Elba as not "suave" 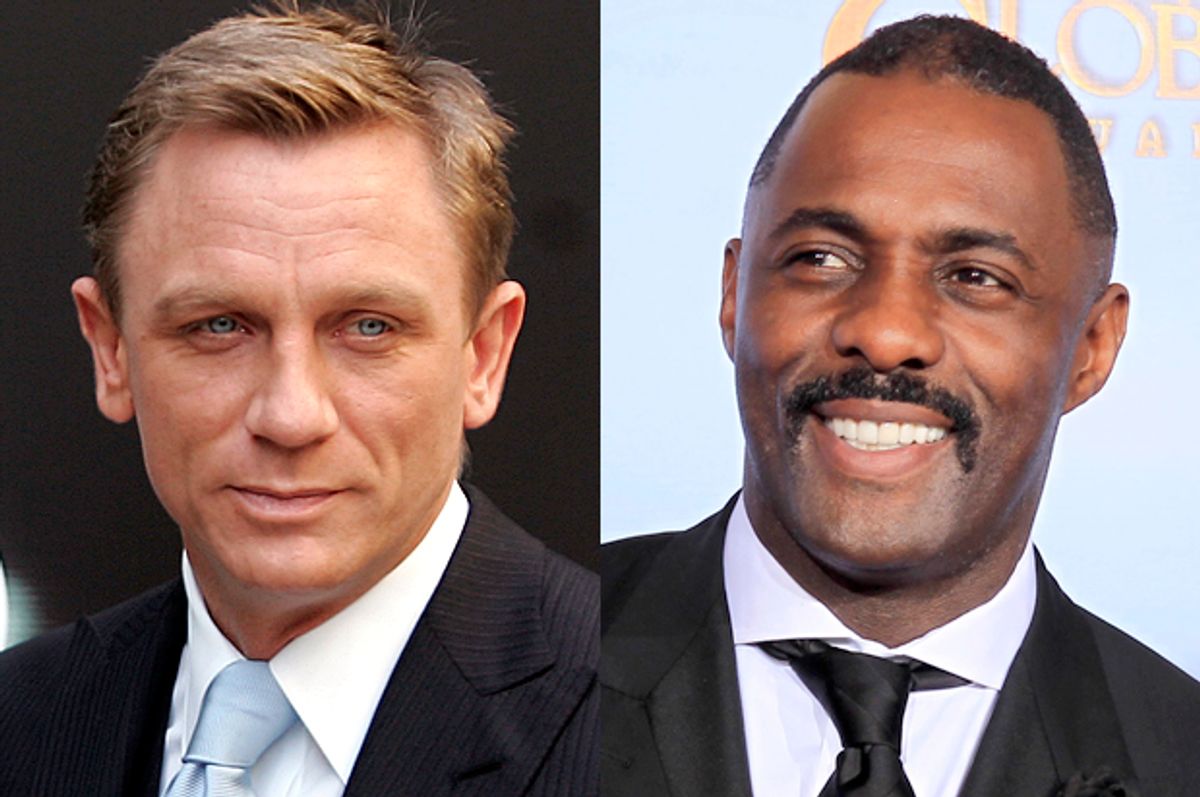 He began his career in the Cold War era, yet through decades of social and political change, James Bond — that suave super spy and ladies' man — has remained in many ways much the same guy he's always been. Now that we're well into the 21st century, though, that persona starting to look a little ridiculous. And the as two different takes on the character from men who know him very well reveal, the conflict between the obvious need for a more modern 007 and the quest to stay authentic to one of the biggest, most durable icons in movie history is fraught with dissenting views.

In a candid interview in the new UK Esquire, James Bond star Daniel Craig reveals more about the Bond he's made his own over the past decade — a Bond he acknowledges sometimes "doesn’t know what the f__k he’s doing, and I like that."

The image of Bond is always filtered through the men who play him, but before Craig, the Bonds tended to share a certain glib je ne sais quoi. Craig, in contrast, brought with him such seriousness and intensity that, as Esquire notes, "Even Sam Mendes, Bond aficionado and director of 'Skyfall' and 'Spectre,' recently admitted he originally felt the casting of Craig could have been a mistake. Crazily, in retrospect, the feeling was he was too serious an actor, too searching, too saturnine." Now, as Craig prepares to unleash his latest Bond thriller, "Spectre," he vows that the film is "a celebration of all that’s Bond" -- but also recognizes of his famously womanizing character that "He’s very f__king lonely. There’s a great sadness. He’s f__king these beautiful women but then they leave and it’s… sad." Craig gets it, in a way that not just no other Bond has but very, very few Hollywood executives do, that "As a man gets older it’s not a good look. It might be a nice fantasy – that’s debatable – but the reality, after a couple of months…" And he adds, "Hopefully, my Bond is not as sexist and misogynistic as [earlier incarnations]. The world has changed. I am certainly not that person. But he is, and so what does that mean? It means you cast great actresses and make the parts as good as you can for the women in the movies." Imagine that!

But lest we find ourselves too far gone into the present day, this week the Daily Mail interviewed author Anthony Horowitz about, among other things, the popular fan favorite to assume the role of Bond when Craig moves on. And Horowitz, whose first Bond novel, "Trigger Mortis," comes out later this month, isn't keen on the choice. But it's not about race! "Idris Elba is a terrific actor," he says, "but I can think of other black actors who would do it better." As evidence, he names "Hustle" star Adrian Lester. "For me," he explains, "Idris Elba is a bit too rough to play the part. It’s not a color issue. I think he is probably a bit too 'street' for Bond. Is it a question of being suave? Yeah." Well, that doesn't sound like it's a color issue at all. Fortunately, Horowitz has zero input on movie casting. And "Selma" star David Oyelowo has already crossed the Bond color line -- he revealed last month he "was asked specifically by the Fleming estate" to voice the spy on the audio version of "Trigger Mortis."

Casting a beloved character always creates controversy — anyone up to play the new Batman is up for a world of "What, that guy?" But the mere thought of a person of color in a familiar and presumed white role sets off a particular set of dog whistles. There was the storm of disapproval when Jesse Williams was rumored as a choice to play Finnick in the "Hunger Games" franchise — unsurprising given the shock when African-American actress Amandla Stenberg appeared in the first film as Rue. There was the head scratching when Michael B. Jordan played Johnny Storm in "Fantastic Four." Elba himself has even been down this road before, when moviegoers threatened to boycott "Thor" after he was cast as Heimdall. And now, to call Elba "street" certainly implies a particular kind of disapproval. How is he more street than the man who was cast as Bond after "Layer Cake"? Or is that he's not more street, just considerably less pale?

Time moves on. Movies can depict more than just straight white men doing straight white man things in a manner left over from the Churchill era. Thanks to Daniel Craig, James Bond is already no longer merely "suave" anyway. The next man to fill his tux can be something new too -- he just has to be charismatic enough to carry the franchise. And in that regard, Elba's already proven himself more than qualified, and it doesn't take a whole lot of street smarts to see it.