The King of the Punks looks at 60: John Lydon on his Sex Pistols past, his new album and why he's still "a work in progress" 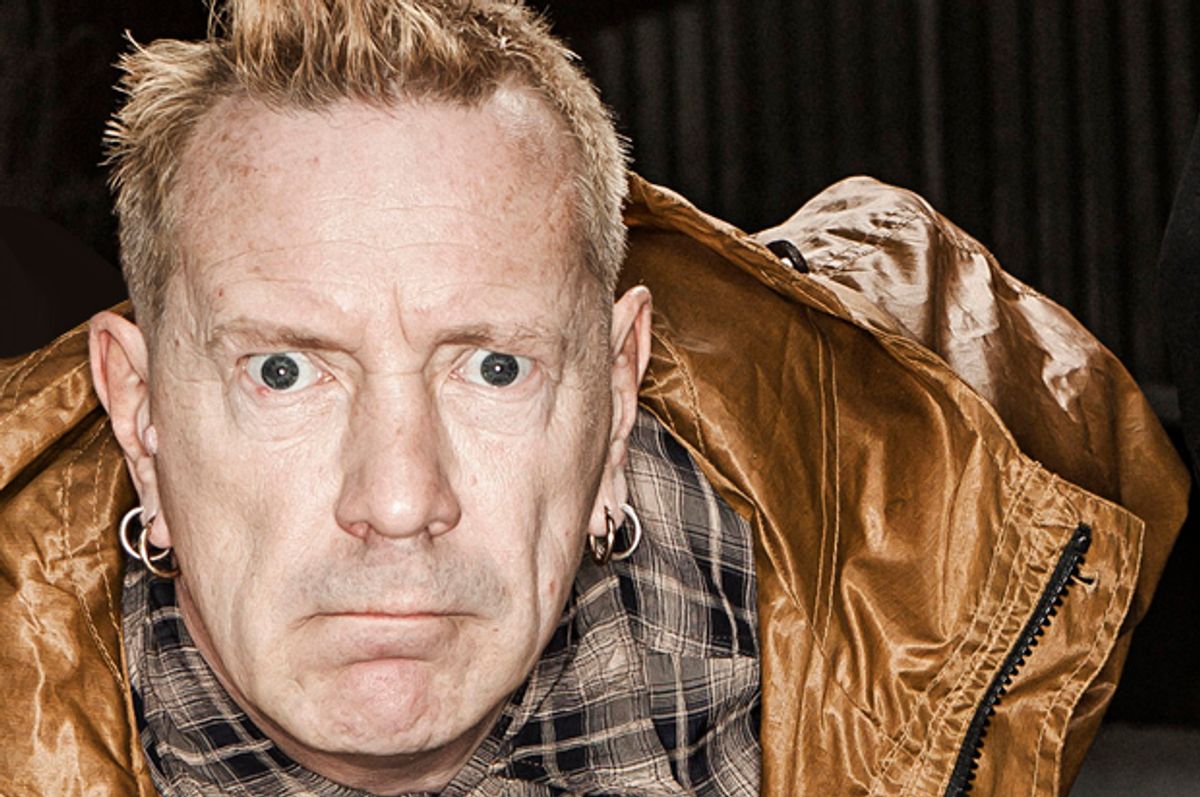 John Lydon, former frontman of the Sex Pistols and author of the new memoir "Anger Is an Energy," is nearly 60, if you can believe it. His tenth Public Image Limited album, "What the World Needs Now," drops Friday.

The self-described "King of the Punks" took a few minutes with Salon recently to look back at his career and forward to what's still to come — and even shared a helpful beauty tip before signing off.

Having listened to the new record, the very first thing I wondered was whether you have changed your vocal style and worked on it over the years in subtle ways.

I hope so. What I’m doing is adding to my inventory. I want my instrument to have as much range as impossible.

Right. There are some voices that are so familiar as yours is that we often don’t realize just how much they change. Do you consider yourself an underrated singer?

With PIL, would you agree your voice is more of a part of an integrated instrument, part of the full band?

Definitely, and it’s an instrument of my soul. What I’m trying to do is represent the feelings I have internally, and whatever bubbles and squeaks match that emotion, that’s what comes forth. I’m very lucky. I’ve always been like this with PIL. I always sort out people I have an empathy with. Therefore, between the instruments and the voice, it becomes a very, very close-meshed thing and so we’re all indeed searching for the same answers. Searching emotions is what we do.

Isn’t that what all artists are supposed to do?

It’s what they’re supposed to do, but what they’re really doing is glory-hunting and chart-topping. I know how not to be a pop star. I think I’ve displayed that very well.

Do you mean that you had to learn that?

I was thrown into infamy at a very early age and I didn’t like the cartoon character that the media was wanting to turn me into, so I walked away from that and I started Public Image Limited. The name is the Public Image Limited. My private life, my family and friends, they are not to be touched. But when I make these records and go onstage, I expect the criticism and am more than happy to receive it, but [in] them early days I learned to protect those around me. Because it’s a very vicious world out there. And because of that, a great place of research for songs.

There are literally 10 times as many PIL records as Pistols records and the way music has progressed, some critics could argue that PIL is much more influential than the Pistols, strictly in terms of sound.

I think it has been. In a much more mellow way. Very quiet, subdued, but it’s an ongoing process [of influence]. There’s not a lot of bombast and pomp and circumstance that, unfortunately, my first band turned ourselves into.

Are you at peace with the legacy of the Sex Pistols?

I’m proud of it. Very proud of it. But [I] knew they couldn’t continue. Once is enough of that. And I can’t write songs for that time in my life anymore, because I’ve moved on! And I’ve moved into far better areas of exploration. That’s where I began. That’s where I learned to write songs, in the Pistols. And did that for a year and a half and then enough of that, all right already. I’m in for the long haul — the more I live, the more I learn and the better I think I’ll get, and that’s what a true King of the Punks should be doing, and is.

We would like to think so. We all have a lot of projects running, but that helps the stability of it.

Over the years, there’s been quite a few members.

I’ve known Lou [Edmonds] and Bruce [Smith] now for practically the entire of my musical career, and Scott [Firth] for five years, which seems like 30, and on this record we wanted to have fun and not be considering what negative reviewers would have to opine about.

Which is what you’ve been doing all your life.

More than most people, my head has been put on the chopping block. I can’t think of anyone that’s been judged as much as me in music.

I don’t think there’s scrutiny in there at all. Come on! That’s celebrity hype. She pays very nicely for that.

The opening track on "What the World Needs Now" is called "Double Trouble," and it begins with you screaming "What you fucking nagging again…" And it made me think of Iggy Pop down in Miami. When you sing “All I want is trouble,"  I can’t picture “Gimme Danger” at his age.

No, it’s nothing like that. It’s about an argument me and my wife had over the repair of a toilet.

I had foolishly repaired the toilet myself four years earlier, and the precedent was set. It gives us an insight into how stupid an argument can be. It’s a good little study in how a relationship can go sour if you don’t nip those little domestic trite instances in the bud. In the end, we called a plumber.

Did part of your personality make you fix your toilet in the first place.

Yeah, yeah, I’m very much a do-it-yourself kind of person.

When the reunited Sex Pistols toured 20 years ago you came onstage and you said, “We’re back and we’re 40!" in an almost defiant way. You’re 59 now, you’ll be 60 in January. Have you mellowed?

Mellowed? No! As long as my brain works, it’s full steam ahead. There are other emotions in me that are more subdued and laid-back and passively resistant. Let’s put it that way: It’s something I’ve never had the time to do in them early years. Everything had to be quickly done and rushed about, in all that menagerie you get trapped in. You never get time to study your craft. When the record companies were stifling my creativity [PIL didn’t record for 17 years due to a clash with their labels], in that time I developed things. I didn’t waste the time.

I got to be good at fiddling. I’m not what you would call a musician. I don’t base my work through an instrument other than my voice. But I have done albums that way.

I’m happier with collaboration — I like the sharing in the work environment. You gotta bear in mind, with the Pistols into PIL I had great visions of it being sympathetic and it didn’t turn out to be that way. There were always personality problems in the band so I had to work with adversity, but the thing I was always seeking — an empathy is actually now there. It’s a novelty, I’ll tell you that. There’s a combined unity in the way we work, the way we look out for each other.

You painted the new sleeve.

Any record I’ve ever done, I’ve had to explain it visually. The character is from a Hopi tradition, but the character exists in all traditions. The trickster, the joker, the clown — but it’s also the one that has the most insight into the ridiculous pomp and circumstances that human beings get themselves into. It’s the man who knocks the belief system, and the belief system is what leads us into the criminality of politics and religion.

Does protest of injustice still motivate you as much as it did?

If I see people being treated wrongly I will stand up, but I wouldn’t say I was a protest songwriter. That was a hangover from the '60s we had to endure. It was all very self-aggrandizing. If I see a problem I stand up, but I don’t per se write anthems for the morally corrupt left wing, which tends to be the way, [and] used by the right wing just as much.

The title [of the new album] reminds me of the old Jackie DeShannon song.

It’s an open question. The song “Shoom” on the album is a homage and a requiem, really, to my deceased father, explaining his sense of irony and very dry and deliberate timing [of] humor. I’m singing in my voice — the idea being I’m carrying on in his tradition.

The first lyric in that song is “Fuck you…"

That’d be my father, all right … We’re working-class; we use all the words in the dictionary.

You published a memoir in the spring ["Anger Is an Energy"]. But you also published one 20 years ago, which is now considered a classic ("Rotten: No Irish, No Blacks, No Dogs"). Don’t you like some rock stars to withhold a sense of mystery? Everyone seems to be doing it.

I like performers to share our natures and not have secrets with our audiences. Why "Anger Is an Energy" was released is because if anyone is interested, or even if they hate me, to find out what it is I come from or what it is I went through, indeed that is the making of me. I survived a very serious illness that almost killed me, and that is my greatest sense of achievement. I know what pain is. So there it is. It’s in my songs. They’ve erroneously interpreted it and now have a map where they can place those circumstances. I’m only 60 years young, nearly. I think I’m a work in progress.

John, it’s been a thrill. Thank you.

All right, brilliant. And have I got a recommendation for people out there? I do, and here it is: If you’ve got an ugly mole on the side of your face, and I had two of them — apple cider vinegar. It works.