No, Christians, you're not being "persecuted" — and Kim Davis is not a martyr 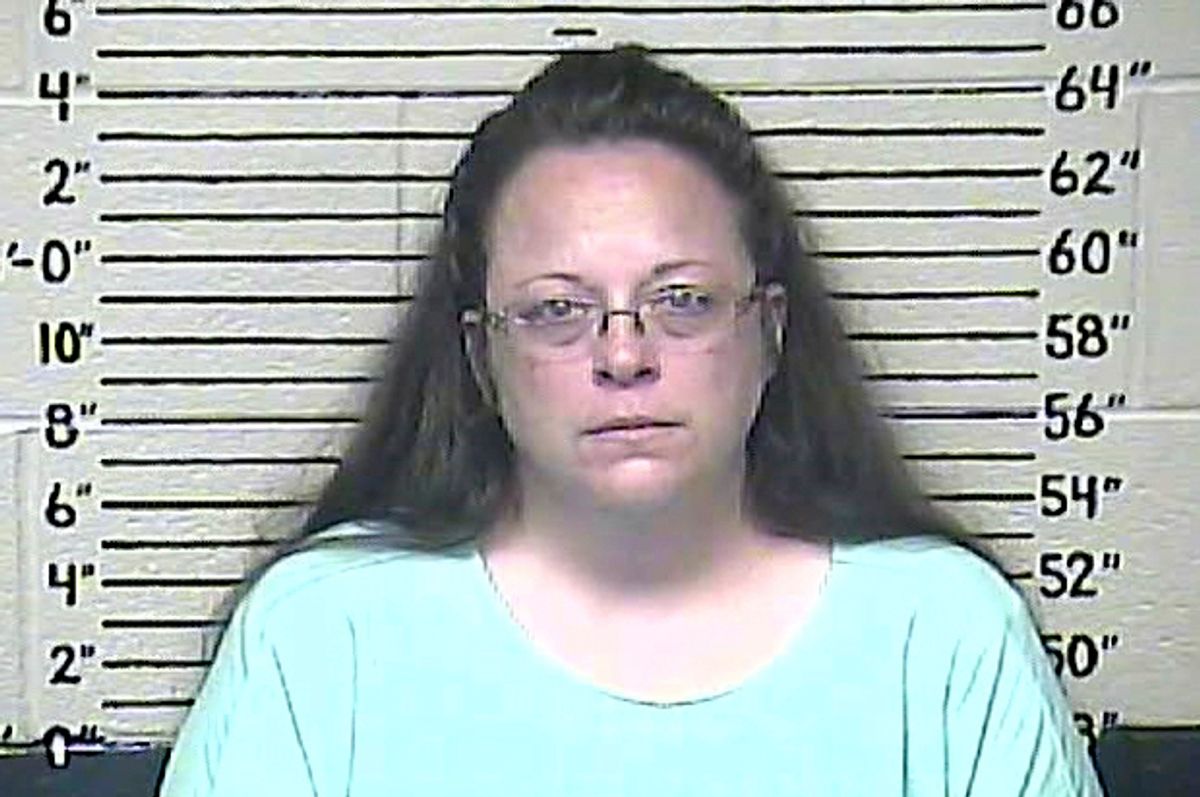 My fellow Christians, we are living in dark times. We are now being LOCKED UP by a MALICIOUS judicial system that is denying us our CONSTITUTIONAL RIGHTS to RELIGIOUS FREEDOM.

Just kidding. We're totally fine. And anyone who says otherwise is a great big crybaby.

When U.S. District Court Judge David Bunning ordered Rowan County Clerk Kim Davis jailed in contempt of court Thursday, her martyrdom appeared complete. Liberty Counsel, the organization "dedicated to advancing religious freedom" that has been representing her, swiftly tweeted that "#KimDavis jailed for the crime of #BeingChristian #persecution in #America #Jesus," while Mike Huckabee similarly noted that "Kim Davis in federal custody removes all doubts about the criminalization of Christianity in this country. We must defend #ReligiousLiberty!"

Reliably absurd homophobe Bryan Fischer, meanwhile, took to the airwaves to fret that "Every advance of the homosexual agenda comes at the expense of religious liberty," and Fox's Todd Starnes lamented that "So our government allows illegals aliens to roam our streets but incarcerates a good-hearted Christian lady? #ImWithKim."

And Davis attorney Roger Gannam issued a statement that "Today, for the first time in history, an American citizen has been incarcerated for having the belief of conscience that marriage is the union of one man and one woman. And she’s been ordered to stay there until she’s willing to change her mind, until she’s willing to change her conscience about what belief is."

It's a familiar refrain, this sob story that letting other people exercise their constitutional rights is an assault on their religious freedom. Last month, when actress Ellen Page confronted GOP presidential contender Ted Cruz at a state fair, Cruz asserted, "At the end of the day, what we should not be doing is persecuting people who follow their faith."

It would helpful to remember here that Davis is not being "punished" for her beliefs. Davis was found in contempt for refusing to abide by a federal court order to issue marriage licenses to gay couples. She is being appropriately dealt with for not doing the taxpayer-funded job the citizens of Rowan County elected her to do, for not upholding the Constitution she took an oath to abide by. I know that lots of Christians are used to cherry picking their Bible verses to make their points, but you're not allowed to be quite so selective with the Constitution. Certainly not if you're someone whose job involves issuing marriage licenses.

And as a Catholic, I can quite honestly report that I have yet to be persecuted for my religious beliefs. I get a fair amount of pushback from secular friends who think I'm delusional, and conservatives who say I'm not a real Christian because I support reproductive choice and marriage equality, but I'll say this — I am not writing these words from a jail cell. You know why? Because American Christians are not being persecuted. And considering that there are places in the world where Christians really are, this boo hoo hooing from people who are astonished that they're not being given a free pass to discriminate against gay people is pretty damn enraging.

We Christians in America have it so easy. And for the privilege of being able to live in a free country and practice our faith, all we have to do is accept that our fellow Americans have a right to practice theirs — or not practice any at all! All we have to do is abide by the Constitution.

Kim Davis is not in jail for her beliefs. No one would give a toss about her beliefs had she not in a wrongful and prejudicial way inflicted them on the couples who reasonably came to her office to obtain what they are entitled to — a marriage license. She is in jail because she didn't do her job. That's not persecution. That's justice.