Kim Cattrall is right about childless women: "It sounds like you’re less, because you haven’t had a child" 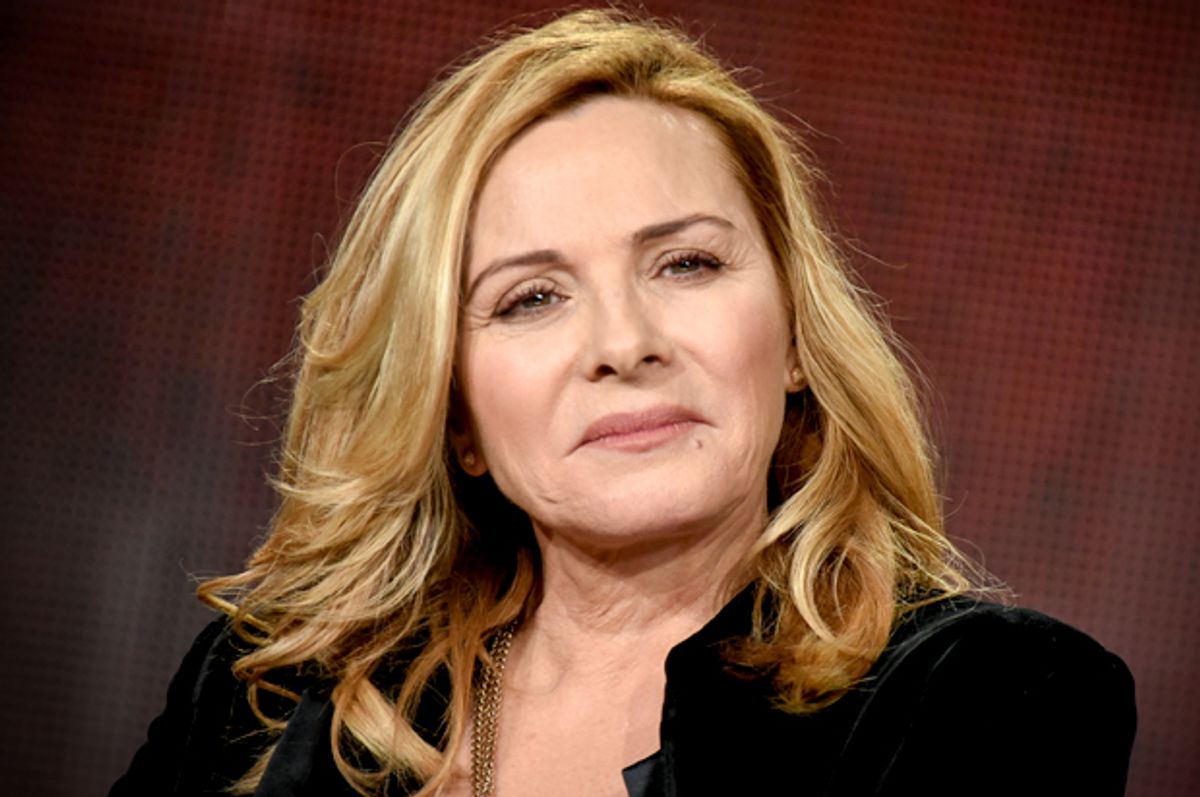 You don't need to be a mother, Kim Cattrall. You don't even need to be motherly. It's 2015, and it's high time we women weren't judged exclusively in terms of how maternal we are.

Speaking with BBC Radio Four's Woman’s Hour Takeover this week, the 59 year-old "Sex and the City" star said she wanted to discuss her choice not to have children, and the conversation around women who choose likewise. "It's the less that is offensive, isn't it?" she asked. "Child-less. It sounds like you’re less, because you haven’t had a child." She talked about her own experience, and about eventually deciding in her forties that "I don't know if I want it that much." And she went on to consider the ways we view women like her. "I’m so glad that I’m not in a political job, because I would be judged even more harshly. It would be, if I had children, could I do the job efficiently? And if I didn’t have children, I was a selfish b___h."

But where the conversation took an interesting turn was when Cattrall asserted that she's "not a biological parent, but I am a parent. I have young actors and actresses that I mentor. I have nieces and nephews that I am very close to. The thing that I find questionable about being childless or childfree is, are you really? There is a way to become a mother, in this day and age, that doesn’t include your name on the child’s birth certificate. You can express that maternal side of you very, very clearly, very strongly…. So I feel I am a mother, of sorts. I am not completely childfree, because I care about the next generation."

Writing this week in the Telegraph, Nina Steele echoed the sentiment, saying, "I know, from all the children I love in my life, that you don't need to have one of your own to be able to mother others."

It takes a village, and when anyone expresses an understanding that we all have an interest in raising up the next generation and making the world a better place for them, that's terrific. You shouldn't have to have reproduced to care about education or environment. That said, you don't necessarily need to express that connection in maternal terms. Because when that happens, the implication is that even women who don't have kids are supposed to function as society's de facto parents, a care-taking service you don't hear demanded too often of men without kids.

Our culture places an insane amount of pressure upon women to define themselves by how high they can rank themselves on the Good Mom scale, even if they aren't even moms. As Gabrielle Union said this month to Redbook, "There's a certain amount of shame that is placed on women who have perhaps chosen a career over starting a family younger. The penance for being a career woman is barrenness. You feel like you're wearing a scarlet letter."

And writing this month in Harper's, Rebecca Solnit recalled being asking during an interview a few years ago about why she didn't have children. She says now that the question "presumed that women should have children, and that a woman’s reproductive activities were naturally public business. More fundamentally, the question assumed that there was only one proper way for a woman to live. But even to say that there’s one proper way may be putting the case too optimistically, given that mothers are consistently found wanting, too."

It's true — for women who have had children, whether they work outside of the home or not, mothers are expected to constantly remind everybody that parenting is their real toughest and best "job," a neat way of reassuring the world that their careers and their aspirations are kept firmly in check.

I find the terms "childfree" and "childless" deeply lacking too. As a colleague said recently, they make having kids sound like having mold. But what I find more appalling and offensive is the way that women are constantly asked to account for their reproductive choices. And it's completely fine for a woman to say, as Cattrall does, "I don’t think I really missed anything."