"I guess when Dad said that he'd like to f**k everyone in the audience the nice, Midwest policemen didn’t see the humor in that": George Carlin's daughter remembers the advent of "7 dirty words"

In Milwaukee in '72 the police waited for George Carlin offstage. In Manhattan, the audience couldn't get enough 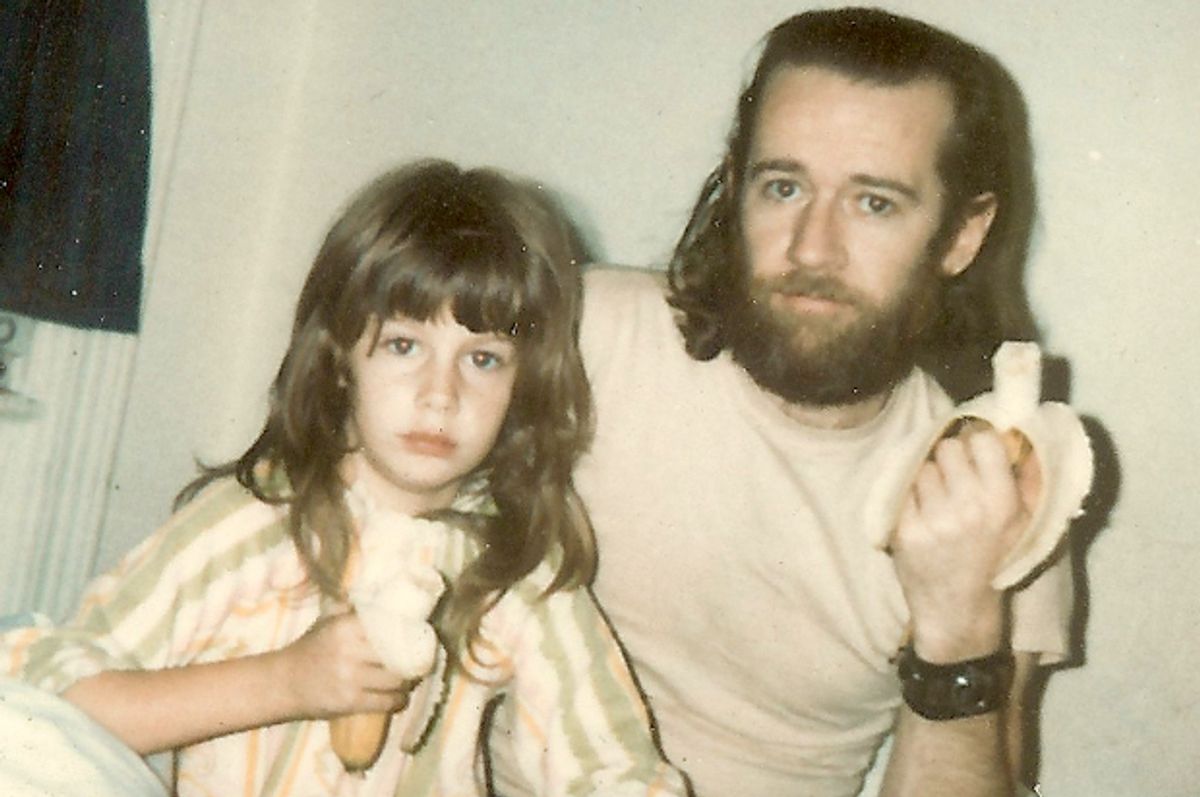 Adapted from "A CARLIN HOME COMPANION: Growing Up With George"

1972 was quite a summer. Everything had changed. Only a few years earlier my dad had been a clean-cut, thin-tied suit-wearing guy who was opening for the Supremes in Vegas and doing spots on "The Ed Sullivan Show." He was making a great living working clean.  Now in 1972, his hair was down past his shoulders, tie-dyed shirts and denim jeans were his fashion staple, and he was headlining at almost every college campus in America. He was now making a great living at what some call working “blue.”

Although our family was now officially part of the counterculture, my mother still wanted her American Dream home, so that summer, we moved from a small apartment in Venice Beach where we had been surrounded by our people -- hippies, bikers and freaks -- and into a huge modern house atop a hill in Pacific Palisades where we were now surrounded by someone else’s people: Rand Corporation executives, a National Security Council bigwig and lots and lots of Governor Reagan’s fans. Although Venice had been a really rough neighborhood, in some ways it felt safer to me, at least our freakiness blended in. Now, it felt like our freakiness could possibly lead to Nixon’s enemies list.

I remember during the first month we lived in the Palisades, there was some sort of party across the street with men in suits and women in cocktail dresses mingling on the lawn – I guess they were the Rand execs. My dad and I were in our front yard, and in a large booming voice he said to me, “Hey, Kelly, look at those assholes over there.” Heads turned, bodies bristled and I wanted to disappear.

An alarm went off inside of me and I suddenly felt very, very unsafe. Recently, my dad had become more and more antagonistic to those on the other side. It was fueling him artistically and politically, but nonetheless it was making me very nervous.

1972 was quite a year in general, because, as you all remember, the country was divided. Lines were firmly drawn, and sides were vehemently chosen. Freaks vs. the Straights. Heads vs. the Blockheads.

In June, after I got out of school, my mom and I joined my dad on the road. One of our first stops was Kent State in Ohio. My dad took me to the memorial for the four college kids who had been shot by the National Guard a few years before.

My dad always wanted me to understand the importance of people who stood up for what they believed in and especially those who were willing to stand up to their government to make their point. It seems that many of dad’s lessons back then were about getting me to understand how the government had always tried to silence those who did not have a voice to begin with – blacks and Native Americans especially. Now, he was saying, young white American girls and boys were in that category too.

Being an only child, and one who was increasingly needing to be more mature than my years (mostly due to the chaos of my parent’s drug and alcohol abuse), I acted nonchalant and calm about this news he was telling me, trying to show my dad that I understood the lesson of civics and morality that he was trying to teach me. But my calm veneer was just that. What was really going on inside of me was that alarm that seemed to be going off more and more those days.  Somewhere inside of me was the question: If they were shooting these people, why wouldn’t they shoot my dad or even me?

A few weeks later, we were in Milwaukee. My dad was hired to work at Summerfest – basically an ocean of beer with an island of sausage in the middle. You know what they call “good clean American outdoor fun.”  By this time, my dad was doing his new routine – Filthy Words.  It’s where he was actually examining in a somewhat scholarly fashion, the usage of language in our culture, more particularly the usage of the words "shit" and "fuck."  Now, this Summerfest was, like I said, an outdoor venue where the main stage act could be heard in a rather large vicinity.  So, there was my dad onstage, killing – most of the audience loved it.  And there were Mom and I backstage enjoying the show. Then suddenly, the promoter comes up to my mom and says, “The cops are here, they’re complaining about the language, and they’re going to arrest George the minute he walks offstage.” I guess when my dad said that he would like to fuck everyone in the audience the nice, Midwest policemen just didn’t see the humor in that.

Knowing that my dad was carrying drugs in his pocket -- grass and coke – my mom thought fast, grabbed a glass of water and walked out onto the stage.  Dad, confused, took the water, and Mom quietly told him to exit stage left -- soon. The cops were closing in on stage right. Dad wrapped it up, left stage left, and we all quickly hustled into the dressing room where the door was locked, drugs were stashed and plans were hatched.

The promoter was trying to keep things calm, when bang.  The sound of a gun went off.  I became hysterical, my mom grabbed me, and then nothing happened. It was a balloon. Someone had popped a balloon.  Everyone laughed a nervous laugh, but I was now emotionally undone. Before I knew it, the door has opened, my dad walked out, and within a few seconds policemen cuffed him.  Now terrified that I would never see him again, I clung to my mother’s body.  After a while, she calmed me down enough so that she could leave to find a First Amendment lawyer to help my dad get out of jail.  I went home with the promoter to his house and family where I spent the rest of the weekend distracting myself by swimming with his kids in something that as a Southern Californian girl I had never seen before – an aboveground pool.

Dad got bail. We reunited. And the fight went on. A few weeks later, we were in New York, my dad’s city. Outside on the marquee my dad’s name shined for all of midtown Manhattan to see – "Carnegie Hall Presents George Carlin" – a huge coup for my dad, who grew up a latchkey kid not 60 blocks away in an area just west of Harlem, called Morningside Heights. He and his kind call it Irish Harlem. Inside the theater, with all the Milwaukee trauma long forgotten, I sat in the corner of the dressing room munching on some potato chips. Dad anxiously paced the floor going over material in his head, while Mom sat on the couch somehow managing to have a deep and intense conversation with someone she had met only 10 minutes ago. Suddenly, we get the knock, “Two minutes, George.”

Escorted by the promoter, Mom, Dad and I leave the quiet of the room to make our way through the bowels of the building.  As we come up from the basement, we start to hear feet stamping and the chant, “George, George, George.” There were over a thousand voices saying my father’s name over and over again. And when he stepped out onto the stage and they erupted into a roar, every hair on my body stood straight up. We were back on safe territory. And clearly this audience, unlike that audience in Milwaukee, would have loved to be collectively fucked by him.

By the end of that summer in 1972 although the lines may have been drawn, and the sides chosen, there was a wave now, an unstoppable momentum to the movement that my father and thousands of others were riding. Change was happening.  And although I was just a child, who was definitely overwhelmed by some of those events, I am also very proud to have been a witness to the courage that it takes to speaks one’s truth and have your voice heard within a culture that isn’t quite ready to hear it, but must hear it. And so here I stand 40 years later, a new generation, in a new millennium, hoping to be a part of a new wave of truth speakers who are unafraid to once again transcend old structures and battles so that we can move this evolution along.