"Food doesn't all look the same and it shouldn't": It's shocking how much "ugly" food we throw away

Organizations are springing up to donate food that would get tossed. Time for consumers to get on board as well 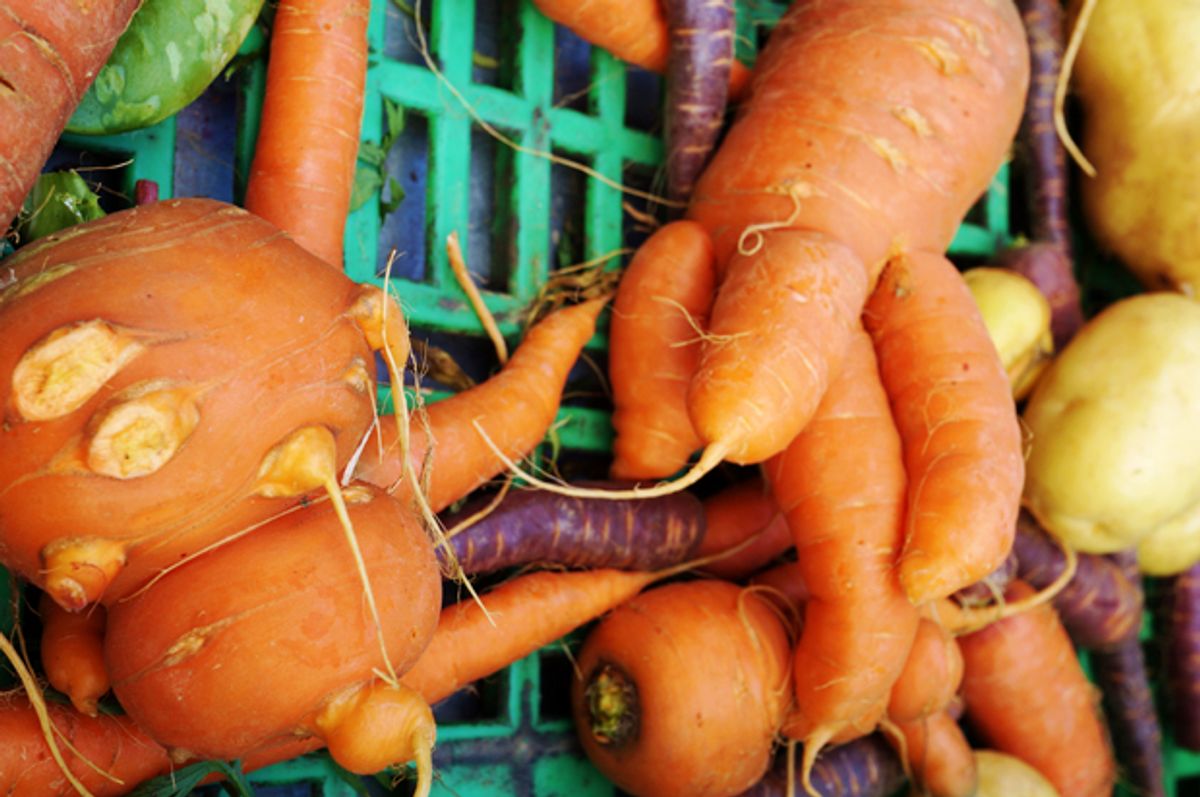 After harvesting a bounty of organic tomatoes, the workers at Sage Mountain Farm in Aguanga, California, gathered around a table to grade them into four categories: uno (one), dos (two), aguado (mushy), and compost. Only a handful of moldy tomatoes went into the compost. Everything else had a use.

Sage Mountain Farm is unique. They sell the No. 1 grade tomatoes to wholesalers or retailers like most farms do. They also sell the No. 2 grade tomatoes, since they are perfect quality with nothing wrong aside from slightly small size or odd shape. Even the mushy ones have a future as sundried tomatoes. But on many farms, these tomatoes would go to waste.

All told, an estimated 40 percent of food in the United States is wasted, according to Jonathan Bloom, author of "American Wasteland: How America Throws Away Nearly Half of Its Food" and founder of WastedFood.com. "And that wasting happens at all steps of the food chain from farm to fork," he adds. While we don't know exactly how much is wasted at each step along the way, "we have pretty good estimates that farms and households represent the biggest amount of wasted food in American and hence also represent the biggest opportunities for change."

Some of the waste is the lettuce you let wilt in your fridge, or the apples that fall on the ground at an orchard and cannot be sold due to food safety concerns. But then there are the mushy tomatoes, or even the entirely good but slightly small ones. Maybe nobody can save an apple that could be contaminated with E. coli, but surely somebody would want to eat a funny-shaped but otherwise perfect tomato, or cucumber, or carrot.

Enter a few young upstarts, Ben Simon, CEO and co-founder of Imperfect, and Claire Cummings, the waste specialist at Bon Appetit Management Company Foundation. The two have not been out of college for long, but they are already making big waves.

Simon's story began while he was still in college at University of Maryland, College Park. One night in the dining hall, he and his friends noticed workers throwing away food. "We talked to the dining hall worker and sure enough it was good food going to waste," he recalls. "We set up a meeting with dining services and convinced them to let us donate it instead."

He and his friends set up Food Recovery Network, an organization that donates food that would be wasted from university cafeterias to soup kitchens, homeless shelters, afterschool programs for kids, and other agencies fighting hunger. The organization grew quickly, from their school to a second chapter at Brown University to a total of 150 colleges and universities in just four years.

Simon became a part-time student in order to devote more time to the organization. "It felt super rewarding to be able to provide meals for people in the community who were having a hard time feeding themselves and who were going through challenges," he reflects, "especially given the fact that this is really good food from the dining hall. Some of the stuff was really high-quality, artisan chef, really nice stuff."

Food Recovery Network grew so much that Simon eventually began earning a salary, and he continued leading the organization for a year after graduating college. Then he decided it was time to move on because the nonprofit he'd built could thrive on its own — and because there was more wasted food to save.

Simon met Bloom through his work in food recovery, and learned about the amount of food wasted on farms due to cosmetic defects. In 2015, Simon and his co-founder of Food Recovery Network, Ben Chesler, joined forces with Ron Clark, whom they met at a food waste conference. In the summer of 2015, the three founded Imperfect in the San Francisco Bay area, selling cosmetically imperfect produce —which they call "ugly fruit" — at a 30 to 50 percent discount.

The trio chose to start in the Bay Area because of its close proximity to California's Central Valley, which would offer them a consistent supply and large volumes of produce.

When Simon talks about it, he sounds like a human press release. "With Imperfect, we are showing the world the true beauty of ugly produce. Not a lot of people are aware but 20 percent of America's produce goes to waste on farms for cosmetic reasons like an apple being a little bit too small, a pear being a little misshapen or a cucumber being a little too curvy. So we are taking this unloved fruit and wrapping it in a lovable brand."

Imperfect's customers pay $12 to receive boxes of 10 to 15 pounds of fresh produce like apples, peppers, onions, zucchini, plums, pears, watermelon, and more. Customers who reside in areas lacking fresh food options will be able to buy the same box for only $8. At present, they are not offering organic boxes, though they hope to in the future. At their launch this summer, they already had 200 orders.

Simon and his partners founded their own organizations to put a dent in the large problem of wasted food — a problem the USDA and EPA just announced they want to cut in half by 2030.

Claire Cummings made her dent by teaming up with Bon Appetit Management Company, which operates more than 650 cafes in 33 states. Shortly after graduating college, Cummings did a fellowship with Bon Appetit, focusing on its sustainable food initiatives. "I had waste as a side project of mine and I was looking at how we could support food recovery programs," she recalls. "That side project became bigger and bigger and bigger, and before I knew it the side project became a fulltime job."

In December 2013, Cummings became Bon Appetit's "waste specialist." The job "didn't exist before, the company created it, and we haven't seen another company with a similar position," she says. "It feels very unique and special." Her job includes all aspects of waste, from donating excess food to people in need to setting up a composting program. One area of her work focuses on the same ugly fruit Simon is saving.

Bon Appetit's program is called Imperfectly Delicious Produce. Because they serve food that is already prepared, it is easy to use a funny-shaped or oddly sized vegetable in a soup or stew or casserole so long as it tastes great in the end.

"We really are well positioned to help address this problem because our chefs are slicing and dicing the produce so the flavor is what matters to us, not the appearance... At the end of the day, our guests are going to see the prepared dish, and not the unshapely carrot or the bent leek that went into it," Cummings says.

The idea for this particular program came from Bon Appetit's CEO, Fedele Bauccio, after he visited a farm and saw the problem for himself. "Anyone who visits a farm and sees this waste; you're just floored. It's enough to shock you into wanting to do something about it," says Cummings. And at this point, she's visited a lot of farms.

To implement the program, she wanted to target food that was actually going to waste, not just food that could be sold as canning tomatoes or juicing apples but would be sold all the same. For every single place they launch the program, "someone from our team has gone out to meet the farmers and has gone out with them and walked the field with them and say this is what we're trying to do."

The program began with a pilot program in May 2014 and became official a few months later that September. Since then, they have expanded it to 16 states, with four more starting this October. So far in 2015, they've saved 252,627 pounds of produce, or just over 126 tons. "Just to give you a snapshot — we're not just buying one kind of produce, we've rescued over 50 different varieties of produce," she explains.

The farmer used to toss out the twisted and gnarly shaped carrots from Washington. If he had left them in the field, they would have attracted a pest called the carrot rust fly, so he had to get rid of them. Now, he sells them to Bon Appetit, simultaneously keeping his carrots from going to waste and resolving his potential pest problem.

And the too-small lettuce from Pennsylvania. The grower packages his lettuce in plastic clamshells, and the packaging is expensive. If the lettuce is smaller than a certain size, he can't recoup the cost of the packaging when he sells it. They used to go to waste, but now he bags them up and sells them to Bon Appetit.

Bloom points to packaging issues like this as a relatively common reason food is wasted. "Let's say cucumbers come packed 48 to a box," he says as an example. "Well, if you have a curved cucumber it's going to throw off how many you can fit into that box. So as a result, a 20 or 30 degree curve is going to doom that perfectly healthy and edible cucumber to the cull pile and cause it to be tossed or plowed under."

He sees programs like the ones described above as helpful in reducing waste, but he envisions other solutions too. "There are rules and regs on the official grades for [produce] but a store could sell any grade they want," he explains. "I'd love to see some relaxation on those rules so that proverbial curved cucumber could be seen as No. 1, but even if that doesn't change, I'd like to see stores take the lead here in shifting what we see as acceptable vegetables."

Part of the equation comes down to consumers. In the case of Bon Appetit, consumers have no clue they are eating twisted carrots or too-small heads of lettuce. In the case of Imperfect, they sign up to receive "ugly fruit" at a low price. But how about in a grocery store, where most produce is big, beautiful and perfect?

"Consumers have a role as well in not only indicating they would buy these fruits and vegetables but also actually doing so when given the chance," Bloom says. "A lot of stores say they would love to sell these produce oddities but consumers have shown again and again that they don't want to buy them."

So next time you see smaller than usual peaches at the store, consider buying them. Or shop at your local farmers market, where odd-shaped goodies may be on sale. Because, as Bloom says, "Food doesn't all look the same and it shouldn't."

Jill Richardson is the founder of the blog La Vida Locavore and a member of the Organic Consumers Association policy advisory board. She is the author of "Recipe for America: Why Our Food System Is Broken and What We Can Do to Fix It."