The accidental humor of New Yorker cartoons: Our never-ending search for the perfect universal caption has a strong new contender 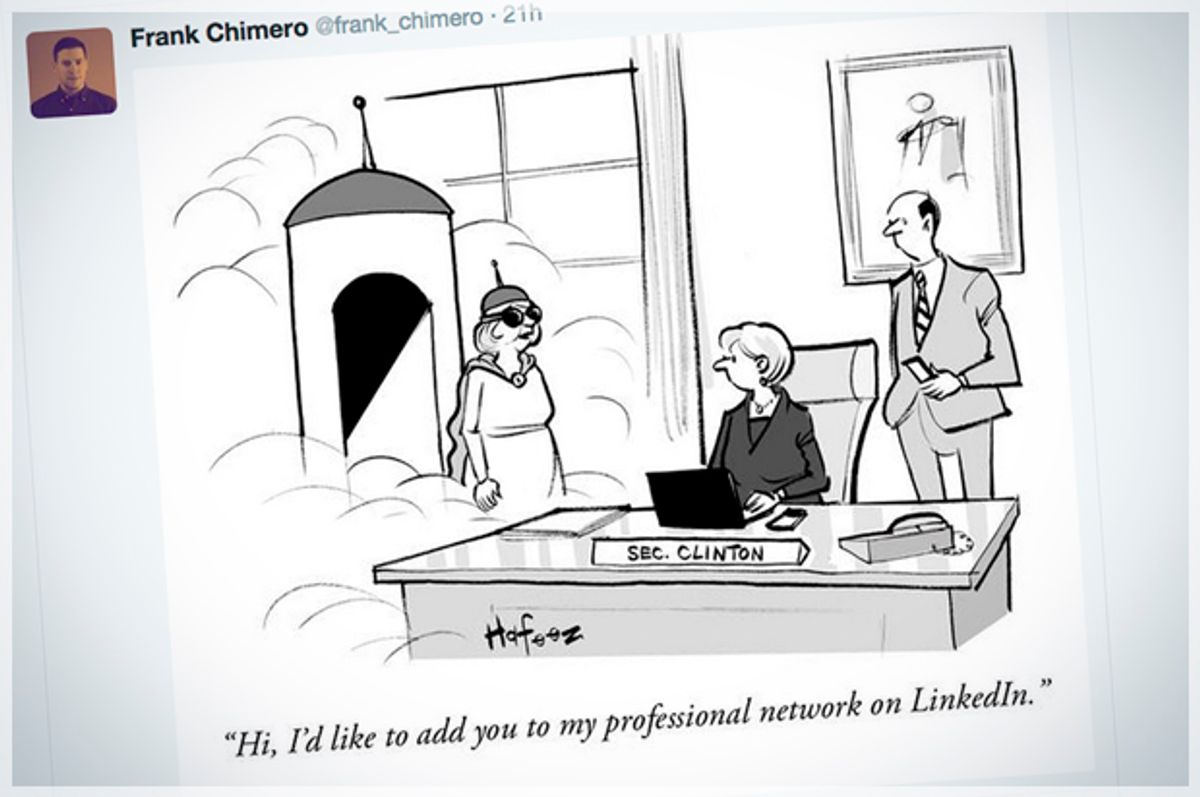 For years now, a handful of code-breakers near and far have been toiling in obscurity and trying to come up with one of the keys to the universe: To what single caption can every New Yorker cartoon be reduced? It’s like the comics version of the unified field theory in physics.

A handful of possibilities have been suggested over the years. But a new one has just emerged that may last for a while. In the words of a BoingBoing headline writer, “‘Hello, I'd like to add you to my professional network on Linkedin’ is the new ‘Christ, what an asshole.’" That probably sounds a bit cryptic. Let me back up.

The New Yorker began in 1925 as a humor magazine, and besides Shouts & Murmurs and the one-panel, black-and-white cartoons, not a lot of that spirit is left. For a publication that offers smart and plugged-in – if not particularly edgy – cultural and political coverage, its cartoons tend to be a bit, uh, staid. It’s not always businessmen at their desks, as it seemed to be for a while, but they can be a little predictable. The Cartoon Caption Contest on the magazine’s backpage, which has appeared in each issue since 2005 and which runs on reader submissions, rarely succeeds at being as funny as it’s supposed to be.

That predictability led blogger Charles Lavoie, back in 2006, to determine that the caption to just about every New Yorker cartoon might as well be, “Christ, what an asshole!” Since “Hell is other people” is often the sentiment that sits behind these cartoons, it fits more often than not.

From 2009 to 2014, artist Cory Arcangel captioned images from the New Yorker Cartoon Caption Contest with the related, “What a misunderstanding!” The understatement of this worked, especially since the Caption Contest cartoons tended to be a bit manic and extreme. (For what it’s worth, the contest cartoons in the Sept. 28 issue show cars piled on top of each other, what looks like a starving, unwashed man crawling into a bar, and a bull jumping from a diving board into a pool. No one is sitting around in a tie in a waiting room or around a corporate conference table.)

So now, with designer Frank Chimero’s LinkedIn joke, have we reached the end of the search? Can every New Yorker cartoon really be reduced to his, or a few other, lines? If you look through the Sept. 28 issue, there are a handful of genuinely funny, non-formulaic cartoons that have exactly the right caption already. (The Wizard of Oz one is genuinely disarming.) But you can love the magazine and still find the Cartoon Caption Contest pretty consistently unfunny and in need of some kind of embellishment.

And the magazine's cartoons in general are pretty vulnerable to re-captioning. As L.V. Anderson points out on Slate: “although it’s particularly appropriate for Cartoon Caption Contest drawings, Chimero’s caption happily also works for the conventional settings of traditional New Yorker cartoons. After all, there’s no situation in which ‘Hi, I’d like to add you to my professional network on LinkedIn’ isn’t annoying.”

There’s a benevolent way to look at all this. The cartoons, like the original New Yorker itself, were dreamt up as a way of making us laugh. For a while they did, and now they are providing humor with assistance from others. The magazine has returned – even if unintentionally – as a vehicle for humor.