"Finders Keepers:" An American fable of broken families, broken dreams and the severed leg in the BBQ

A grisly find in a small-town storage locker produces a tragic, hilarious tale that goes far beyond easy mockery 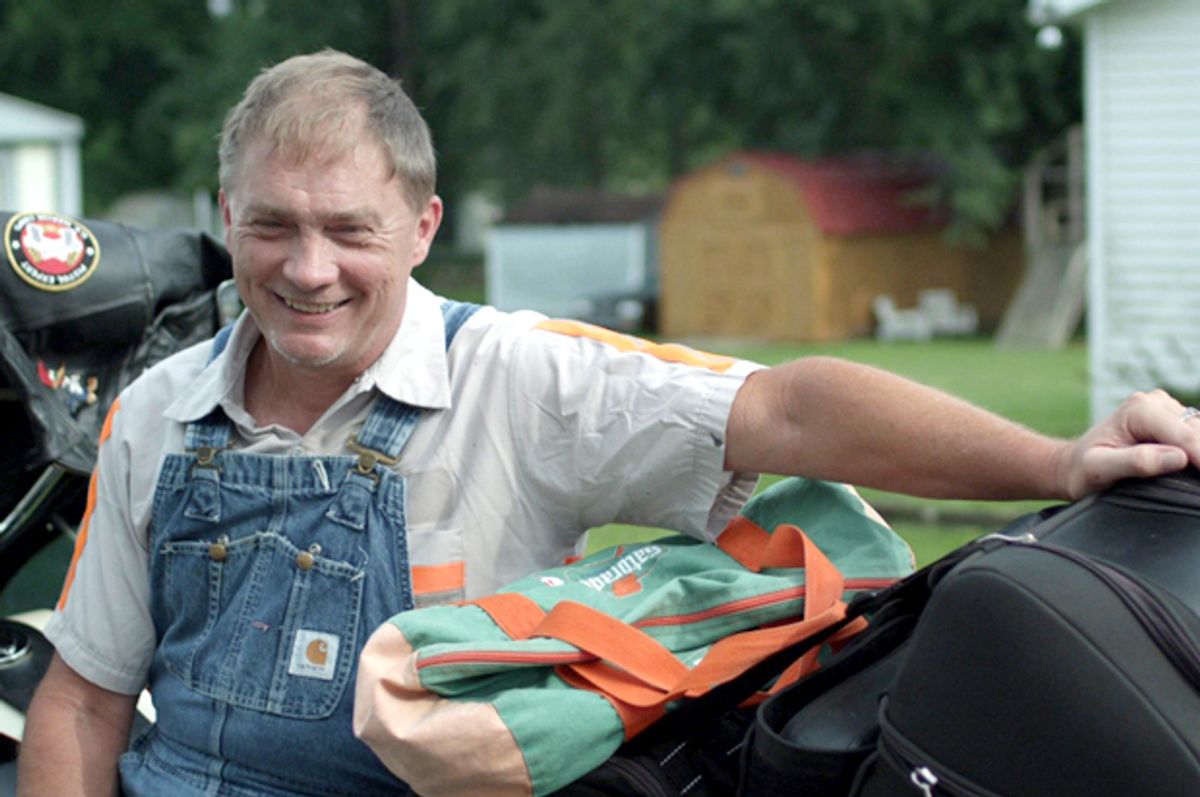 “It’s a funny story, but it’s born of tragedy,” says the estranged mother of a man named John Wood, one of the two warring antagonists in the indie documentary “Finders Keepers,” this week’s installment in the long-running series America Is Weirder Than TV. A few scenes further into the film, a woman looks at an object on a table in front of her and muses out loud, “I should be able to peel it off like beef jerky.” What is she talking about? She’s describing the desiccated flesh on an embalmed human leg. Aren’t you glad you asked?

You can describe virtually every aspect of human life as a combination of comedy and tragedy, to be sure. But that awareness of the grief and sadness and broken dreams that lie beneath a ludicrous small-town legal dispute over an amputated limb is what redeems Bryan Carberry and Clay Tweel’s “Finders Keepers” from being outright mockery or “redneck porn.” If this film has a moral it might work out something like this: Be careful what you wish for, especially if what you wish for is to become famous and get on TV because you bought a smoker grill at a warehouse sale that turned out to have somebody else’s leg inside it.

As Shannon Whisnant wistfully explains late in “Finders Keepers,” he was initially horrified and disgusted by the unexpected discovery he made inside the grill that Wood had abandoned at a storage facility in their hometown of Maiden, North Carolina. (Maiden is in the western third of the state, heading towards Appalachia. It hosts a 500,000-square-foot Apple iCloud data center. Its motto is “A town with a future.”) But much later, long after he had made a now-legendary 911 call to report his grisly find, Whisnant came to think of the gray-brown mummified appendage (which is every bit as nasty as you could imagine) as “my extry foot.”

I’m not kidding, and I’m not trying to make fun of Whisnant, who is one of those uneducated but oddly eloquent people who give rural America its enduring and distinctive character. Whisnant’s sense of grievance against Wood goes back long before the incident of the severed limb in the barbecue grill, back to when they were kids growing up in Maiden: Whisnant was from the wrong side of the tracks, with a drunken and abusive father; Wood was raised in one of the town’s most affluent families, but blew it all on drugs and alcohol. “He has got a forkéd tongue,” Whisnant murmurs, a pronunciation that can only have come from some country preacher’s sermon on the 140th Psalm.

There is a legal question at the heart of “Finders Keepers,” sort of, and one that lacks clear precedent: Are your limbs an inextricable part of your person, even if no longer attached? Or is a severed leg just a possession, an item of property no different from a 1999 Epson printer or Grandma’s bone-china gravy boat? But that issue is no more than a MacGuffin pasted atop more mysterious questions, including: Why in the name of God and all the angels did John Wood hold onto his amputated leg in the first place, and why would anyone store such a thing inside a backyard appliance customarily used to smoke hams? And why would Shannon Whisnant want to keep this unholy relic after he found it?

It’s always rather too easy, when considering other people’s lives, to conclude that they are pursuing idiotic goals and doing things that aren’t worth doing. But I suspect that if “Finders Keepers” connects on an emotional level, it may cause us a flicker of recognition about the mummified legs in our own stories. Wood wanted to retrieve his leg (in skeletal form, he had hoped) in order to create a memorial to his father, who had died in the same private plane crash that led to the amputation. Whisnant received the leg as a gift from Providence, and a chance to pursue his cherished dream of being a comedian and entertainer “who is on television every day.”

So while Wood pursues legal avenues to regain custody of his leg – in the face of inarguable evidence that he dumped it in a storage locker, left town and never paid the bill – Whisnant tries to monetize his discovery, with what might be described as excessive entrepreneurial spirit. He charges $3 to show people the grill (without the disputed leg in it). He sets up a website (footsmoker.com) where he hawks T-shirts, humorous memorabilia and an inexplicable invention known as the Ass Gasket. He becomes a staple of Charlotte-area TV news and talk radio, and confidently assures the filmmakers, “A gentleman told me today that I was a household name in Hollywood, California.”

Final disposition of both John Wood’s former leg and the various claims and counterclaims between the two men arrives, perhaps inevitably, in the syndicated-TV courtroom of Judge Greg Mathis (who rules, I would have to say, with Solomonic fairness). But we only reach that resolution after the leg travels back and forth between Whisnant, Wood and a funeral parlor – retrieved along the way from the drive-through window of a Hardee’s -- and after a confrontational press conference held in the parking lot of a Dollar General store. Both men ultimately come to understand that their situation is ridiculous, and neither gets exactly what he wants. That’s pretty close to a universal predicament, and the bittersweet conclusion of “Finders Keepers” suggests that the important question is not whether we can retrieve what is lost or fulfill impossible dreams, but how we respond to those failures.

"Finders Keepers" opens this week in New York and Los Angeles, with more cities to follow. It will be available on VOD from cable, satellite and online providers, beginning Oct. 2.