BBC journalist cat-called during street harassment report: "95 percent of women are victims of verbal harassment — and a man shouts sexual obscenities at me" 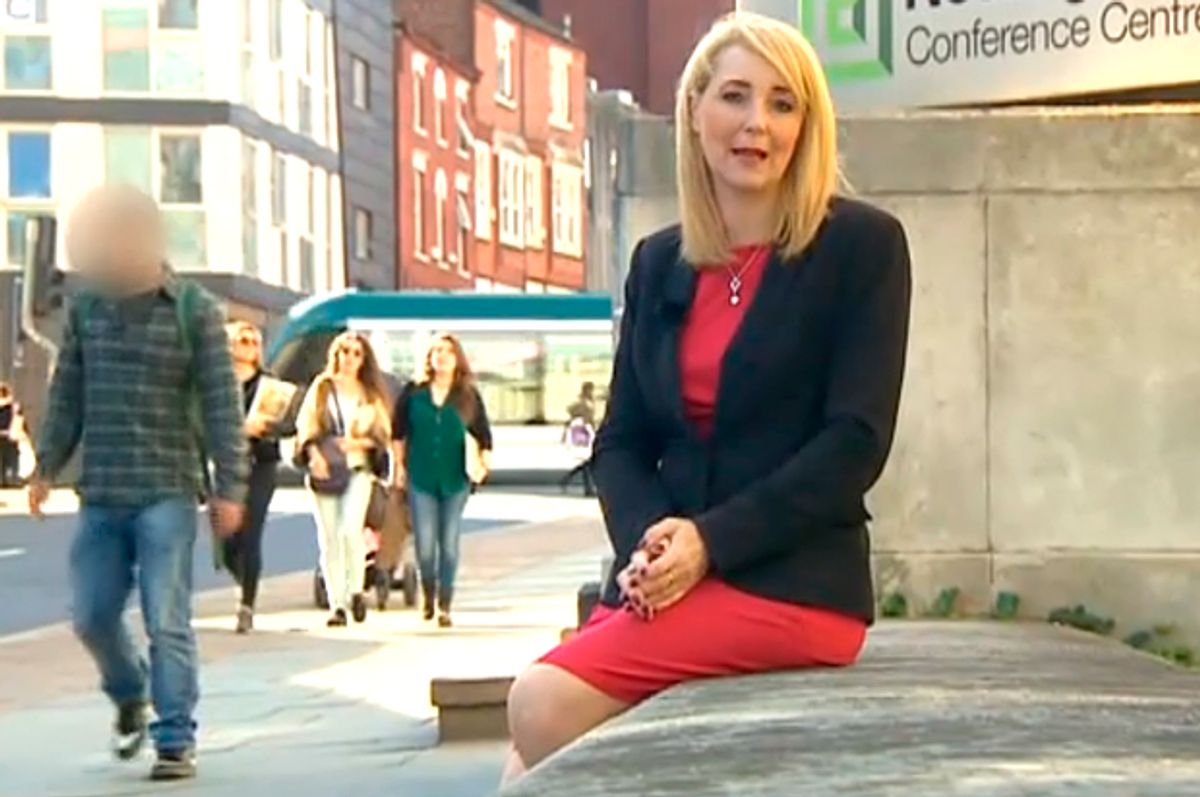 In much the same way that the comments on any article about feminism demonstrate why we need feminism, a news segment on street harassment must surely include an on-air example of street harassment. So thanks, random UK gent, for providing such a fine example of just what BBC East Midlands Today reporter Sarah Teale was talking about.

Teale was in Nottingham late last week shooting a segment on a street harassment summit from the Nottingham Women's Center that had invited guests to "explore ways in which attitudes can be altered and behavior changed, making public places safer for women." Event organizers noted that "Alarming levels of the misogynistic harassment that women face in public spaces have been reported, ranging from cat-calls to violent physical and sexual assaults. Harassment, in any form is unacceptable and, in Nottingham and Nottinghamshire, we want to lead the way in tackling this issue." But what are stats to evidence?

In a clip BBC Radio Nottingham shared on Facebook, Beale is outside the conference center, saying, "An online study showed that a shocking 95% of people said they had been harassed, jeered at, or had obscenities shouted at them in the street and a large proportion said they'd also been groped or grabbed inappropriately in public." Then, a man walks by and says something that is bleeped out. Beale, exasperated, just points and says, "Yeah. Like that." On Twitter, Teale followed up with a droll, "Irony - reporting how 95% of women are victims of verbal harassment-and a man shouts sexual obscenities at me." And she's responded to claims the remark was staged by calling the suggestion "absolute nonsense." She says, "It's fairly obvious from my reaction that it wasn't staged."

Though the content of the man's remark cannot be heard in the clip, it's entirely possible it was a variation of a popular phrase that in recent years passers by have enjoyed blurting whenever they see a news crew. The way it works is, spot a reporter, interrupt her with the phrase "F__k her in the p___y," feel powerful and hilarious.

Last spring, CityNews reporter Shauna Hunt, fed up when some lads attempted to interrupt her report from a Toronto FC soccer match with the famous phrase, turned the tables and asked, "So were you guys waiting around to see if you could say 'F her in the P' me on live TV? Can I ask why you would want to do something like that?… Seriously, it’s a disgusting thing to say. It’s degrading to women. I’m sick of this. I get this every single day, ten times a day, by rude guys like you." In a followup report, she elaborated, saying, "Every single day people are yelling this at us. Men drive by, roll down their car windows and just yell it on the street."

Teale is likely aware of this phenomenon too. She says, "If it is a craze it doesn't make it any less offensive." Shouting disgusting things at women because you find them appealing — not a compliment. Shouting disgusting things at them because it makes you feel like some clever media disruptor — not a thing. It's not flattering, it's not social criticism, it's not funny. And what the men who do this crap and then have the gall to ask, "What's the big deal?" fail to understand is that every woman who's hearing this garbage directed at her has likely already heard it ten times today. It's not even original. It's just tiring. Yeah, like that.