Planned Parenthood is under attack: Why the social media #PinkOut is too important to dismiss 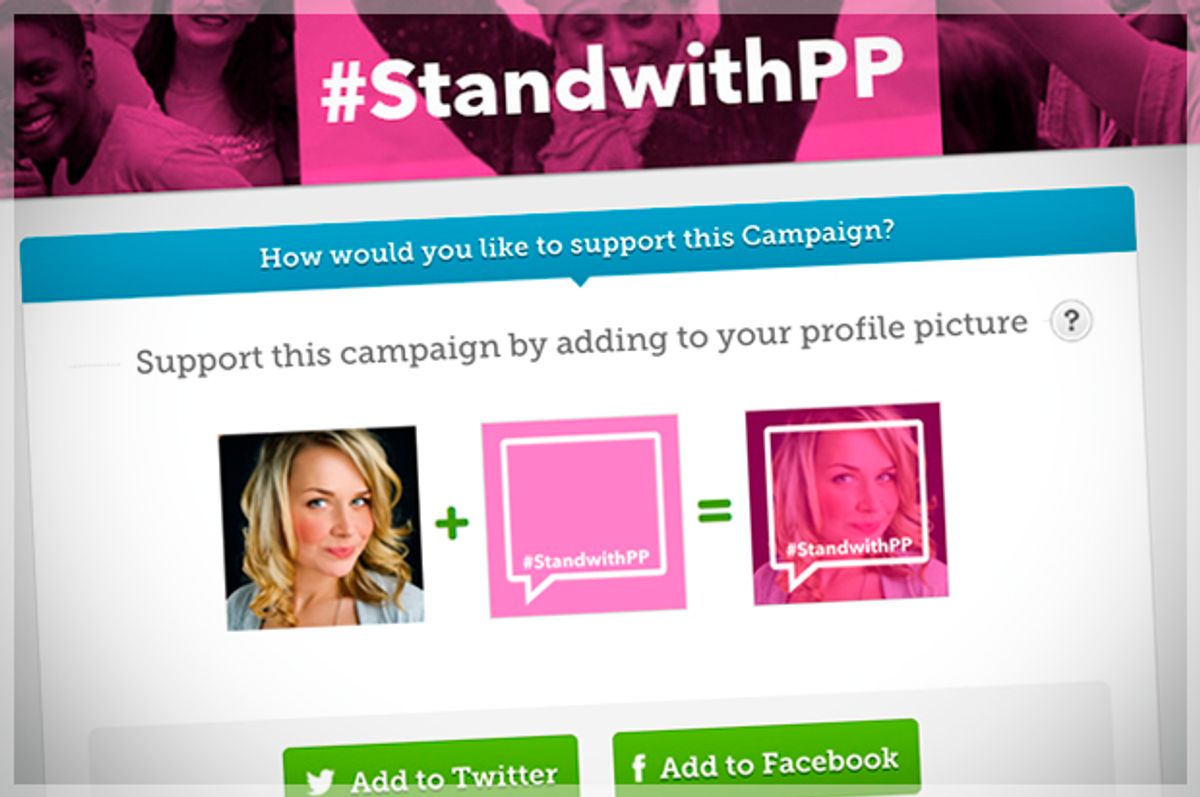 There are two things in life that reliably make me recoil in horror: Any action that suggests I am a "joiner," and the color pink. I kept my head down and gritted my teeth all through the flashmob era. At this writing, I am one short day away from burying my head in the sand for 31 days to avoid the grotesque glut of bubble gum-colored merchandising and ersatz empowerment that defines breast cancer awareness month. And yet — on September 29, I can get completely behind being part of a crowd, and even a Schiaparelli hue. Because as Planned Parenthood puts it, "Today's the day we fight back!" For the women's health organization's #PinkOut Day — the same day it is defending itself before a US House committee — Planned Parenthood has invited its supporters to stand with something as simple as a rose-colored social media avatar.

The organization has in the past few months endured its most grueling scrutiny and controversy in decades, thanks to a series of sting videos that purported to show senior director of medical services Deborah Nucatola, attempting to illegally profit from the sale of fetal tissue. (Planned Parenthood, like many other health services providers does facilitate in fetal tissue donation and research, which it describes as "standard across the medical field.") Forensics experts from Fusion GPS declared in August the footage to be "blatantly manipulated." But that didn't stop the House from voting to cut off for one year the $500 million Planned Parenthood receives annually — a move that is now being fought.

Despite Jeb Bush's recent assertion that "I'm not sure we need half-a-billion dollars for women's health issues," plenty of sentient American humans — male and female — support the work that Planned Parenthood does and the services it provides, including testing for and treating STDs, contraception, and cancer screenings. Federal funds do not cover abortion, even though women have a Constitutional right to abortion and this isn't a theocracy. Kneecapping PP is also just a dumb economic strategy. As NPR observed in August, cutting funding for Planned Parenthood "would be expected to lead to additional births, increasing federal spending, primarily for Medicaid."

In the midst of what feels like yet another targeted full-on assault on women's right to safe, affordable healthcare and reproductive autonomy, you wouldn't necessarily think a boost of color would have an impact. But there's something about going a little monochromatic that sends a powerful message. More than two years ago, in anticipation of the Supreme Court's marriage equality decisions on United States vs. Windsor and the Defense of Marriage Act, Facebook users were encouraged to switch up their profile pictures to include a scrim of the Human Rights Campaign’s famed red and pink equal sign. The result was an outpouring of support, a message of solidarity and love.

Similarly, while Cecile Richards has been trying to get it done inside the halls of government, the women and men of social media have been making their voices heard — and letting their colors fly. Hillary Clinton changed her avatar logo to a very PP pink, saying, "When Republicans attack Planned Parenthood, they’re attacking women’s health. Proud to #StandWithPP—and always will." Bernie Sanders did the same, saying, "I #StandWithPP. These attacks come from those who simply don’t believe women have a right to control their own bodies. I disagree. #PinkOut" Notoriously Twitter-shy Lena Dunham switched her profile picture to include the #Standwith PP message and pink tone, as did Sandra Fluke, who added, "You can't see me on radio, but I'm wearing pink! #PinkOut" Elizabeth Banks did it too, saying, "Can't be there in person to #PinkOut but there in spirit! #StandwithPP" Actress and advocate Martha Plimpton has been tirelessly posting updates and information, as well as showing a photo proving she's "Rocking my pink shirt for #pinkout day!" Jennifer Weiner said, "Because when women can't control if and when to have children, they're not in control of their lives, I #standwithPP." And every girl's first literary hero, Judy Blume, has been likewise vocal, saying, "I #StandWithPP. In'59 when I was getting married I called on PP for advice on birth control. They do what it takes to care for women…. Katherine, in Forever, went to PP for birth control. She would say, I #StandWithPP. So would her grandma. Love that grandma."

For far too long — and frankly, let's face it — for the entirety of the next month as well, the color pink has been associated with everything cute and passive and placating. It's been a color of making people feel comfortable with the issues that affect females, issues people don't like to talk about in polite company. Well, that hell with that. Our rights are under attack. So moving forward, let's say that pink is the color of fearlessness and refusal to back down. Let's say it's the shade of the strength and dignity of women, living free of fear and shame. Because our health and our rights and our choices are nothing to blush about.