Russell Brand's impossible revolution: How a drugged-out comedian reinvented himself as radical apostle 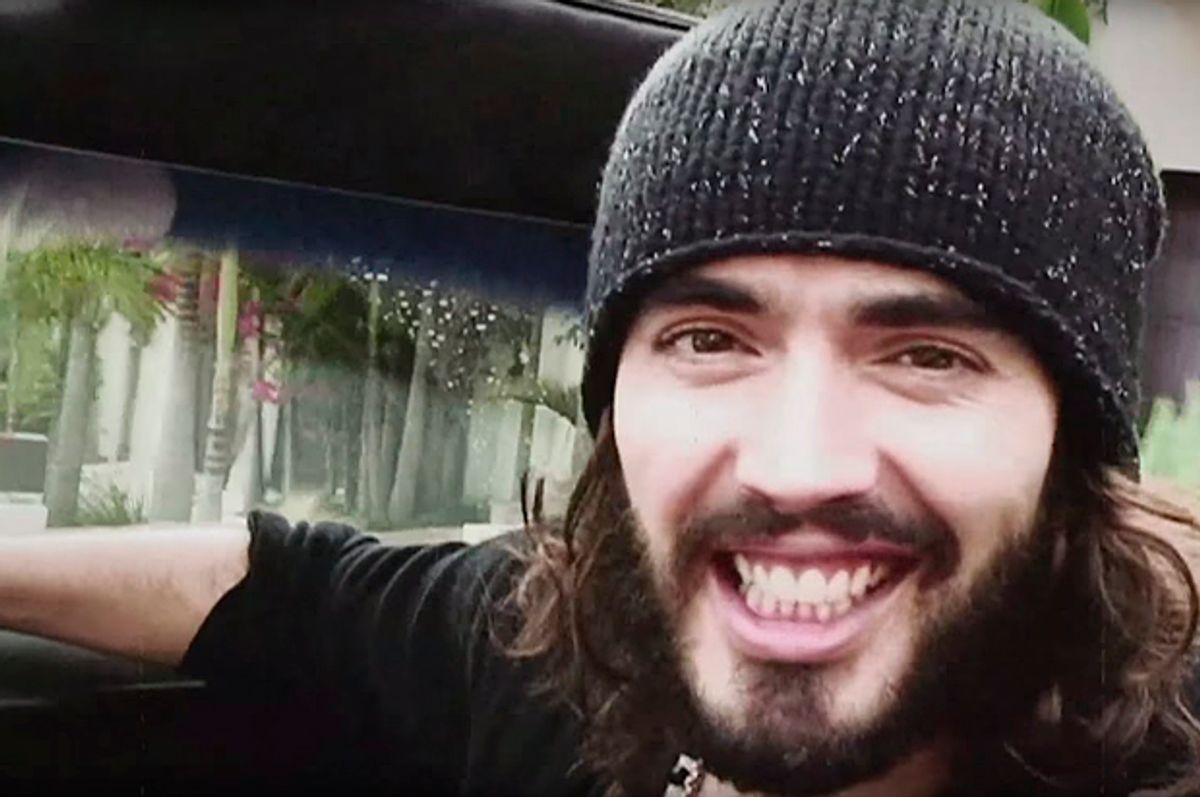 Russell Brand is smart enough to see that to be a comedian is already to stand against the social order in some respects, and to enlist himself in a tradition of comedy as political provocation that stretches from Jon Stewart through Lenny Bruce and Mark Twain all the way back to Socrates (who we must assume was not the first person to make fun of the self-satisfied morons who run things). If anything, the Brand we encounter in Ondi Timoner’s fascinating documentary “Brand: A Second Coming" is too smart for his own good.

Brand is not content with being a trickster, a philosopher or a provocateur. He wants to be a revolutionary, a word so freighted with ideological baggage we can no longer understand it. He has openly floated ideas of himself as a savior, a symbol, a messiah. Of course his “Messiah Complex” comedy tour was a “joke,” and his self-comparisons to Gandhi, Jesus, Che Guevara and Malcolm X were intentionally narcissistic and grandiose. But where do the jokes end with Russell Brand? The complicated, inspiring and often maddening former spouse of Katy Perry we meet in Timoner’s film is trapped in a cycle he can clearly perceive but is unable to escape. He’s a little like that guy in the late medieval illustration, pushing his head through the sky: What good does it do him, or anybody else, to know too much?

Brand’s 2014 book “Revolution” did not spark a revolution, at least not that I noticed. It was daring, fatally undisciplined and sometimes idiotic, almost an exaggerated juvenile prank. Outside his fan base, it was largely ignored or derided. That may not have been fair, but cultural discourse is rarely based on principles of fairness and decency, especially not in the Information Age – which demands instant, negative opinions from everyone about everything. Just ask Brand’s old friend Amy Winehouse, who rose to celebrity status in London around the same time he did and succumbed to the same excesses, but lacked his resilience or his luck or his male privilege. Indeed, “Brand: A Second Coming” stands in accidental counterpoint to Asif Kapadia’s “Amy,” both films asking why we nominate certain talented and charismatic people as celebrities, and what God of Darkness we then sacrifice them to.

Throughout this movie, Brand bounces around the world in first-class airplane seats and the backs of limousines, moving from the practical to the impossible to the unreal. He has conventional celebrity do-gooder moments, visiting children who make their living by scavenging in a vast garbage dump in East Africa. (Actually seeing that, he says, was a revelation.) He launches a promising entrepreneurial and residential facility for recovering drug addicts in London, a social question much closer to his own biography. As Brand frequently tells his stand-up audiences, he has done extensive personal research on addiction in the pub bathrooms and back alleys of England. When he appears on a BBC panel show opposite a smug Tory prohibitionist, Brand runs rings around the guy.

When it comes to specific questions of policy and politics, in fact, Brand is sharply focused, well-informed and generally on the money. Whatever value there is in seeing a major British media celebrity, who was briefly on track to become a Hollywood star as well, embrace openly radical positions, Brand has delivered that in full. He has repeatedly argued that the perverse system that elevated him to wealth and fame has condemned millions of others to poverty and servitude, and that the entire political economy of the Western world is organized to protect that anti-democratic and inhumane division of the spoils.

In virtually every television appearance, Brand is more intelligent, more far-sighted and more compelling than the people supposedly interviewing him – who of course would not be on television in the first place if they didn’t accept the dominant social and economic order as normal and natural. His classic takeover of MSNBC’s “Morning Joe,” which ended with host Mika Brzezinski in a state of conspicuous agitation and arousal, is one of the highlights here. When Fox News pundits or their British cognates (not that British TV can remotely compete in terms of sheer bigotry and ignorance) deride Brand as a failed D-list actor gone rogue, a Champagne socialist or a post-adolescent poseur, that only demonstrates what an irritant he has become, and what a threat he presents.

But those criticisms keep reappearing, and clearly get under Brand’s skin, because they’re not far wide of the mark. He looks, dresses and acts like a groupie-shagging rebel rock star from an underground comic. Like all famous people, he is surrounded by a coterie of assistants and supposed friends who demonstrate their loyalty by catering to his whims and never telling him he’s wrong. According to his American agent, Brand owns a house in Beverly Hills (a legacy of his 14-month marriage to Perry) that he has never been inside. I’m not embracing the specious Fox News logic that those things invalidate Brand’s political arguments, or render him a hopeless hypocrite. We all must live in the world as we find it, and let those who are untainted with any personal or political hypocrisy cast the first stone.

We also have limited time on the planet before we die, and if Russell Brand wants to leverage his fame to shift consciousness and change society during the time he has left, more power to him. But he is far more comfortable and more powerful during the more intimate and unscripted moments captured by Timoner’s camera, as when he engages children on the streets and schoolyards of the dismal Essex suburb where he grew up. “You married Katy Perry!” one little girl screams at him. He tells her that adults do all sorts of things for all sorts of crazy reasons, and when she grows up she is likely to marry Katy Perry too.

Early in the film, Brand kicks back in his limo reflecting on a just-concluded gig in the “Messiah Complex” tour, during which he spun out an elaborate gay-sex anecdote in increasingly lewd detail. The point was supposed to be a gag about the 10 Commandments, which do not mention homosexuality but urge us not to covet our neighbor’s oxen. But Brand had pushed it in an entirely different direction, and had relished the audience’s struggle between its avowed position of liberal tolerance – “we’re not shocked by gay people!” – and its increasing discomfort with the raunchy specifics. “I liked that,” Brand muses with a mischievous smile.

I have no idea whether a great social and political revolution is coming, as Brand confidently predicts, or what it will look like. But I suspect he serves the cause more profoundly when he challenges his own complacent fans with what gay men actually do with their bodies, or reminds the audience at a grotesque fashion gala that Hugo Boss designed uniforms for the Nazis, than by orating about injustice from a soapbox. The revolution needs comedians at least as much as it needs “revolutionaries.”

“Brand: A Second Coming” is now playing at the Village East Cinema in New York, with wider release and home video to follow.