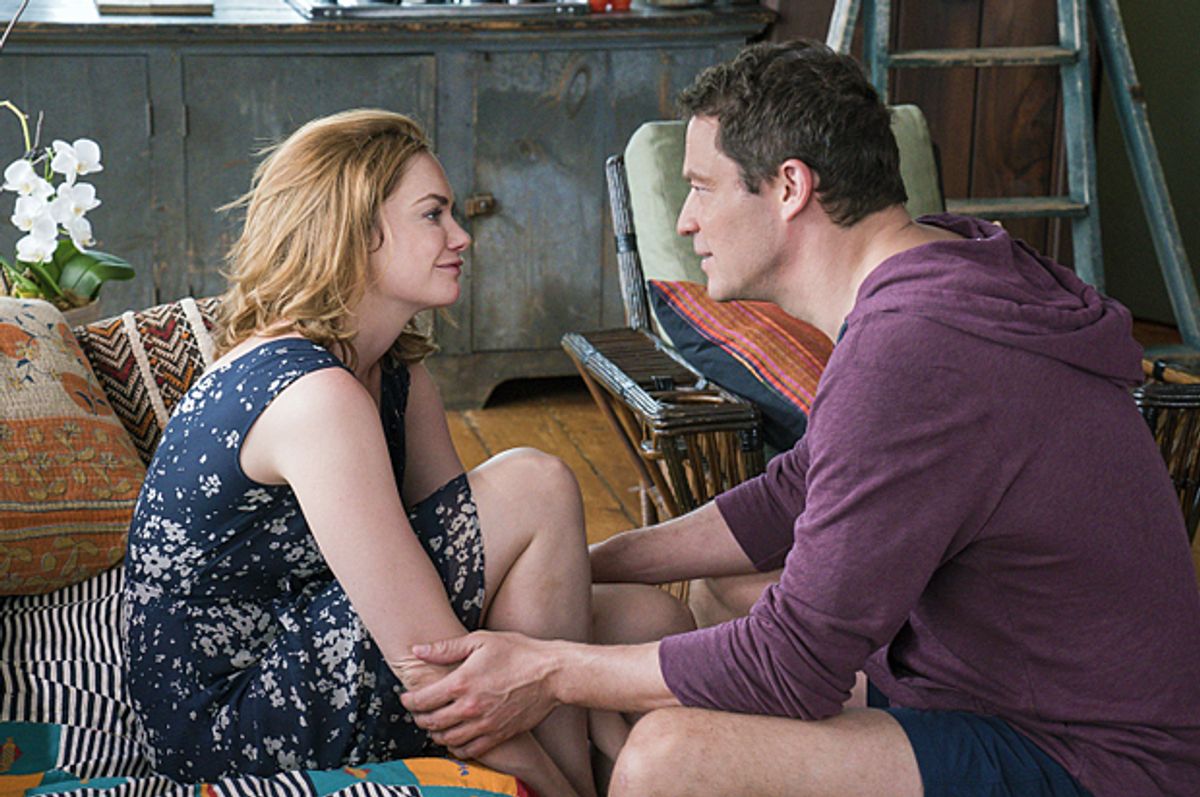 The pilot episode of Showtime’s self-indulgent character drama “The Affair” makes prominent use, in the first few scenes, of On Prospect Park, a 15-story glass building designed by celebrated architect Richard Meier. It’s difficult to miss—an incongruously geometric pile of aquamarine glass on the stately oval of Grand Army Plaza in Brooklyn, which is otherwise populated by brick-and-stone buildings. For a filmmaker, I imagine the Meier building is too captivating a subject to ignore, especially as Dominic West’s character Noah is engaged in the thematically appropriate hobby of swimming in his first scenes—the Eastern Athletics directly next door to the condominium tower has a pool, which is a rare enough commodity in New York City. “The Affair’s" opening credits offer a sensuous, atmospheric view of moving water and roiling surf, so the show had to start with Noah swimming in his cramped, confined, citified pool, before he breaks away from Brooklyn to the wild shores of Montauk, where the waitress Alison (Ruth Wilson) captures his heart. And what, was “The Affair” really going to film Dominic fucking West at one of the city’s (numerous, affordable and indispensable) YMCAs?

No, indeed, it must be the Meier building, with the implications of any glass house: transparency, perspective, fragility. Noah will go on to shatter his own carefully constructed home life with a few devastating blows. The characters of “The Affair” are pent up in lush interiors or confined to intimate, exclusive social spaces; their experience of New York City is as ostentatiously singular as the Meier building itself. And just as the building has drawn fascination for its defining characteristic—which is that neighbors and passersby can see right into every unit of the building—so too are the private lives of Noah, Alison and their spouses, Helen (Maura Tierney) and Cole (Joshua Jackson), exposed entirely to us, the audience.

In my cynicism about the class politics of television—and as a Brooklynite who lives not far from the Meier building—I am inclined to dismiss at least some of “The Affair’s" luxury as the television version of Catalog Living. Especially on premium cable networks, who know exactly who is paying for their programming, shows about the mundane neuroses of rich white people take up a lot of space—and Noah and Helen are so rich that they barely seem to live in the harried, money-conscious, waiting-on-line New York City that most of its 8 million residents live in. Their lack of daily worry for things like parking tickets and cab fare—and the conspicuous lack of public transit—is as much a signifier of their privilege as their vacation plans to go to the family summer home in Montauk.

This is exacerbated by the storytelling problems of the show, which splits each episode into two halves, and then tells the same events from the point of view of another character. In the first season, those perspectives were split between Noah and Alison, and took place almost entirely in Montauk over one summer. In the second, Noah and Alison have moved to Cold Spring, on the Hudson Valley, while Noah and Helen negotiate the terms of their divorce. Helen now has a perspective, which adds a lot of necessary depth (and gives us the added benefit of seeing Tierney do more things on-screen, which is never a bad thing). But the show is paralyzed by its own vision, at times; the problem with making a show about singular perspectives is that those people are necessarily self-absorbed. So it’s been hard to tell if Noah feels entitled to his wife’s money, or stifled by it; it’s hard to tell if Noah and Helen are effortlessly rich, or just perceive of themselves that way. “The Affair” has used this ambiguity, these necessarily isolate perspectives, as a lens for examining romantic relationships.

Lurking in the background, though, is far more interesting subtext about the politics of gentrification. The leads in “The Affair” are both the gentrifiers and the gentrified; Helen, who owns their brownstone through her trust fund and grew up on the Upper East Side, is diametrically opposed to bicycle-riding Alison who picks up catering shifts for wealthy visitors. Montauk, in the mid-2000s, was the subject of its own hand-wringing about gentrification, as the ostentatious wealth of the Hamptons crept all the way to the lonely little fishing village all the way at the end of Long Island. (It got to the point that there was even a Montauk branch of the Momofuku Milk Bar, though that is now apparently closed.)

Property is a primary concern for Alison and her husband, Cole, in Montauk; they’re broke, but they own their house, and the influx of new money means they could sell it for a lot of money. It’s a point of contention in the first season, complicated by the years-ago death of their son, nearby family, and a collapsing marriage. Meanwhile, Alison becomes entangled with Noah, who is a novelist who can only afford his modicum of success and four children because Helen bought their brownstone in Brooklyn with her trust fund and her parents fund the kids’ private-school tuitions. Helen herself is as a result constantly beholden to her overbearing parents, who use money as a way to infantilize and manipulate her. And in the opening of Season 2, as Noah and Helen start the grueling process of dividing their worldly assets, we find that he and Alison have decamped to a small apartment in Cold Spring, N.Y., on the Hudson Valley, which itself has been the target of a renewal effort for decades. The space is being lent to themby publishing friends who own it while Noah and Alison figure out their finances. The romantic perspectives of “The Affair” might be distorted and unrealistic, but the demographics of real estate acquisitions are eerily on-target.

Indeed—the romantic machinations of the show have ceased to interest me at all. The relationships with real stakes in “The Affair” are the characters’ confrontations with their environment. In one of the season premiere’s more wrenching scenes, Helen tries to manufacture romantic interest for a man who is interested in her. They are in a hotel room with floor-to-ceiling glass, again; the view from the room is staggering. She is entirely disengaged from it, despite staring out the window so that she doesn’t have to look at him. The height and view give the bed the impression of being perched in the sky. In the background, the wannabe-beau (Josh Stamberg) rattles on about acquiring the hotel being a big move for his clients, the Greenpoint Hotel Group—Greenpoint being another controversial hotbed of glass-building development in what was a middle-class neighborhood. He stops nattering, finally, observing that he is being boring. She shakes her head, as if to disagree, but she’s clearly beyond caring about it. And yet she, and he, and the rest of the characters, are inexorably bound up in the class politics of the city; it burbles on in the background, molding their lives, while they stumble through romantic ups and downs.

The problem that “The Affair” has, consistently, is how limited it is by its unhappy characters. The show is fixated on interiority—going so far as to film New York City, an incredible, dense city with extraordinary public spaces, primarily in interiors. They’re well-appointed and lush, but empty—even the production design yearns for connection. (I marked a scene in Washington Square Park as one of the first that used a New York City public space. It’s the grittiest the show has gotten. The character in question, naturally, started vaping in public, without even a stifled fear of being caught doing something illegal.) There is something brilliant about “The Affair’s" understanding of New York City’s—and the broader world’s—socioeconomic politics. But it’s hard to push characters who are so stuck in their own spaces to come to broader conclusions about the world. Indeed, one of the sad truths of “The Affair” is that its leads are rather too wrapped up in themselves to see the shape of the world they’re creating; maybe that is the show’s most political statement of all.