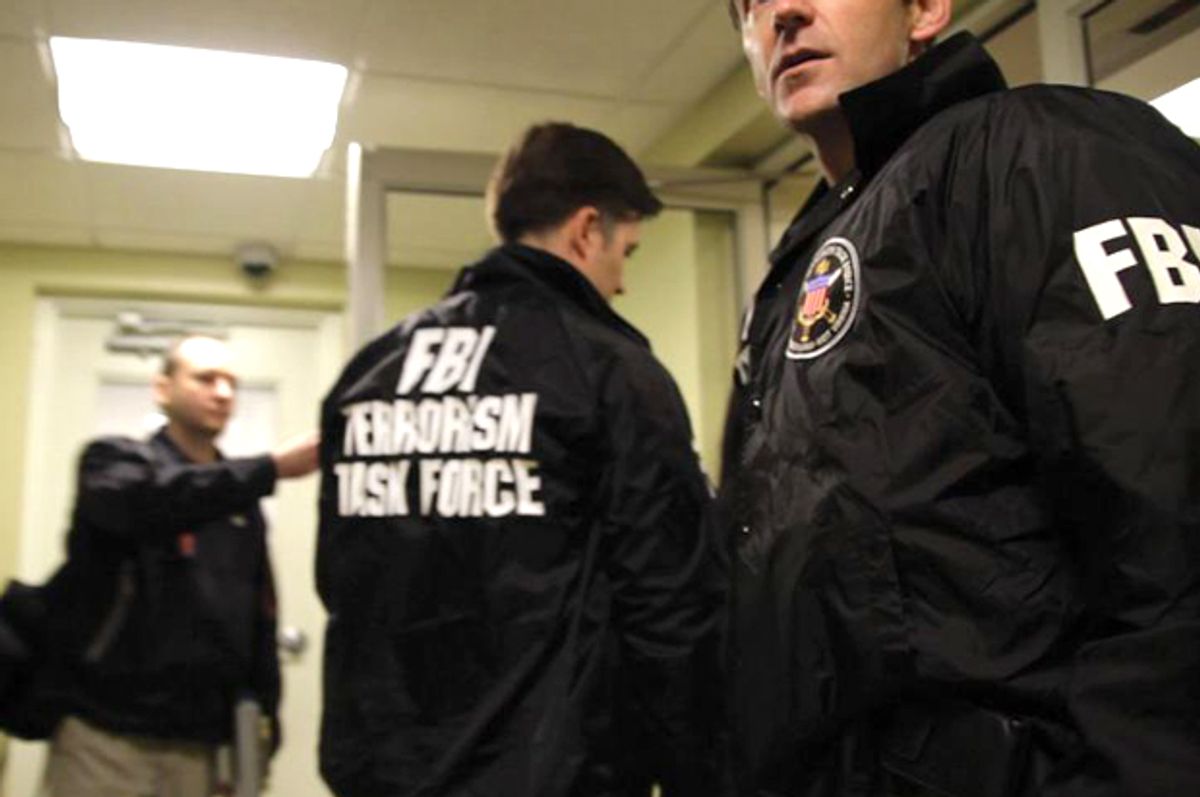 If Saeed Torres were a fictional character, his story might have elements of heroism, or perhaps of comedy. But the guy we meet in the indie documentary “(T)error” – an aging African-American Muslim and former Black Panther widely known as “Sharrif,” who says he has been an FBI informant for many years – is much more a figure of pathos and tragedy and despair. Largely because he’s a depressed pothead with a big mouth, Shariff allowed filmmakers Lyric R. Cabral and David Felix Sutcliffe to record his efforts to gather incriminating evidence on a man in Pittsburgh the feds saw as a possible terror suspect. To say that this undercover operation does not go well is an understatement, and the resulting portrait of the domestic anti-terrorism campaign, although it’s admittedly a portrait in miniature, could hardly be more disheartening.

Since 9/11, more than 500 people have been arrested in the United States on various charges related to terrorism, a great many of them after investigations fueled by paid informants like Shariff. Civil liberties activists have raised concerns about this tactic all along, arguing that it enables, encourages and rewards entrapment. But to put it bluntly, hardly anyone noticed or cared. We have no idea how many of those 500 people were genuinely likely to commit acts of violence in the real world, or to run off and join ISIS or the Taliban. But the entire approach of law enforcement over the past 14 years, with the implied or explicit consent of the public, has been “better safe than sorry,” and I think it’s fair to say that the First Amendment rights of Muslims who are perceived to hold anti-American beliefs have not been a high priority.

At first it seems entirely possible that Shariff is just a lonely and frequently baked geezer who’s trying to make himself sound important; it’s not like the filmmakers could call up the FBI and check on his employment status. Is he really getting late-night text messages from agents, and receiving paltry cash payments in cars on the back streets of working-class Pittsburgh? (Like so many glamorous-sounding jobs, this one pays a lot worse than you’d think.) But evidence keeps mounting up over the course of the film, and ultimately you can’t resist the conclusion that at least some of Shariff’s improbable-sounding tales are true.

He won early release from prison after a felony conviction more than 20 years ago, and his release documents refer to a “confidential file” explaining the circumstances. Shariff says he was recruited by the FBI following the first World Trade Center bombing in 1993 because he had previously worked with Omar Abdel-Rahman, aka the “Blind Sheikh,” who is now serving a life sentence for masterminding that attack. After the fall of 2001, with law enforcement granted nearly unlimited resources to pursue Islamic extremism wherever they could find it, Shariff was effectively upgraded to full-time status, along with thousands of other paid informants recruited within or around the Muslim community in America.

Shariff offers Cabral and Sutcliffe various justifications for what he does, above and beyond the fact that he essentially has no choice, and no other obvious way to earn a living. He insists that he only provides information about Muslims who are giving Islam a bad name through their support of al-Qaida and other militant groups, and that he stops short of entrapment, engaging his “POIs” (or persons of interest) in conversation about jihad or the Taliban or the overall situation in the Middle East and opening the rhetorical door to more serious topics. Shariff is also an isolated single father in his 60s, raising a young son for unexplained reasons, who is in questionable health, appears to have few friends or social contacts (other than FBI agents) and has largely cut himself off from the world of New York black radicals and black Muslims who were once his community.

It’s not like the use of paid and/or coerced turncoats to penetrate a criminal conspiracy is some brilliant new law enforcement strategy, to be sure – and the hazards of this approach are equally well understood. We can’t judge the overall efficacy of the FBI’s anti-terrorism strategy based on one sad-sack informant and a handful of cases, and I’m not suggesting otherwise. But everything we see in “(T)error” supports the arguably that the government has encouraged grossly incompetent sting operations, tried to gin up “terror cells” where none exist, and repeatedly sought to criminalize First Amendment activities that are both constitutionally protected and widely tolerated among virtually all non-Muslim Americans.

Shariff’s most celebrated case resulted in the 2007 conviction of Tarik Shah, a New York jazz musician and martial-arts instructor who is currently serving a 15-year prison sentence on conspiracy charges. As a New York Times article at the time made clear, the whole thing pretty much stank of entrapment, whether or not it met the legal standard implied by that word. Shariff befriended Shah over a period of years and made numerous clandestine recordings that captured the musician as “a boastful, somewhat bumbling” man and a so-called terrorist plot that “was almost entirely talk … No weapons appear to have been bought, and no martial arts training took place.” Eventually, Shariff (in the article he is called Saeed, his actual Muslim name) persuaded Shah to swear an oath of loyalty to al-Qaida for a visiting recruiter named Ali, who was actually an FBI agent.

That was it: Tarik Shah did not take up arms against anyone or build a bomb or make any vaguely plausible plans to do any such thing. In point of fact, he never had any contact with any real Islamic militant group. He has been in prison for eight years because he’s a hothead who said a lot of stupid stuff to a paid FBI informant who coached him and goaded him and encouraged him, and because he swore a fictitious oath to a fictitious al-Qaida operative. But if the Shah case sounds egregious, it’s like a blindingly efficient “Law & Order” episode compared to what happens with a man named Khalifah al-Akili, Shariff’s Pittsburgh POI in “(T)error.”

In fairness, you can kind of understand why Akili got the government’s dander up, although that has nothing to do with the question of whether he was a terrorist in waiting or had committed any noteworthy crime. Akili is a white American with an unmistakable western Pennsylvania accent, who was born into a Protestant family and converted to Islam as an adult. (At least according to some metrics of threat assessment, such converts are especially vulnerable to extremist ideology.) His Facebook page was full of intemperate rhetoric about the monstrous evils of America and the greatness of the Taliban, and featured images of himself shooting at a rifle range. All of which comes 110 percent under the rubric of the First Amendment, as I understand it – but like I said earlier, we haven’t quite determined whether such rights extend to Muslims.

Akili is also immediately suspicious of the African-American man he’s never met before and who is evidently new in town, the guy who aggressively befriends him and keeps showing up everywhere he goes. Shariff goes to the mosque every time Akili is there, keeps inviting him out for coffee and jihad chatter, and drops him little notes about how cool that Taliban freedom fighter was on a recent episode of “Homeland.” (No, I’m not kidding.) Akili consults with a local civil-rights lawyer, and the night before they’re about to go public with his allegations of federal harassment (and the official outing of Shariff as an FBI asset), Akili gets arrested on a firearms violation and presented to the media as a dangerous radical at the heart of a presumed terror plot.

Except that no terror plot is ever outlined or alleged by the authorities, because there never was one. Since the filmmakers are present for Akili’s actual arrest, we know that the breathless story told later on local TV about the daring SWAT team raid that brought down a desperate fugitive is a flat-out, full-bore falsehood. Given the steady drumbeat of gruesome gun crimes I don’t want to sound cavalier about that issue, but if they arrested everybody in Pittsburgh who owns an illegal or unregistered firearm, there wouldn’t be enough people left to fill the stadium for a Steelers game.

Khalifah al-Akili seems like kind of a weirdo. He holds to an extreme religious ideology that would strike most Americans as pretty unpleasant, and he appears to lack the common sense Allah gave an aphid. But he didn’t actually do a goddamn thing; he didn’t even make Tarik Shah’s mistake of assuming that Shariff was actually his friend. Now Aliki is in prison for an offense that was made to sound vaguely terror-related but wasn’t. His wife was evicted from public housing and deported to England. Saeed Torres or Shariff or whatever we want to call him is an unemployed former FBI informant, his cover permanently blown, looking for work as a short-order cook and smoking more weed than ever. Your tax dollars at work, keeping us safe.

“(T)error” opens this week at the IFC Center in New York, with wider theatrical release and home video to follow.