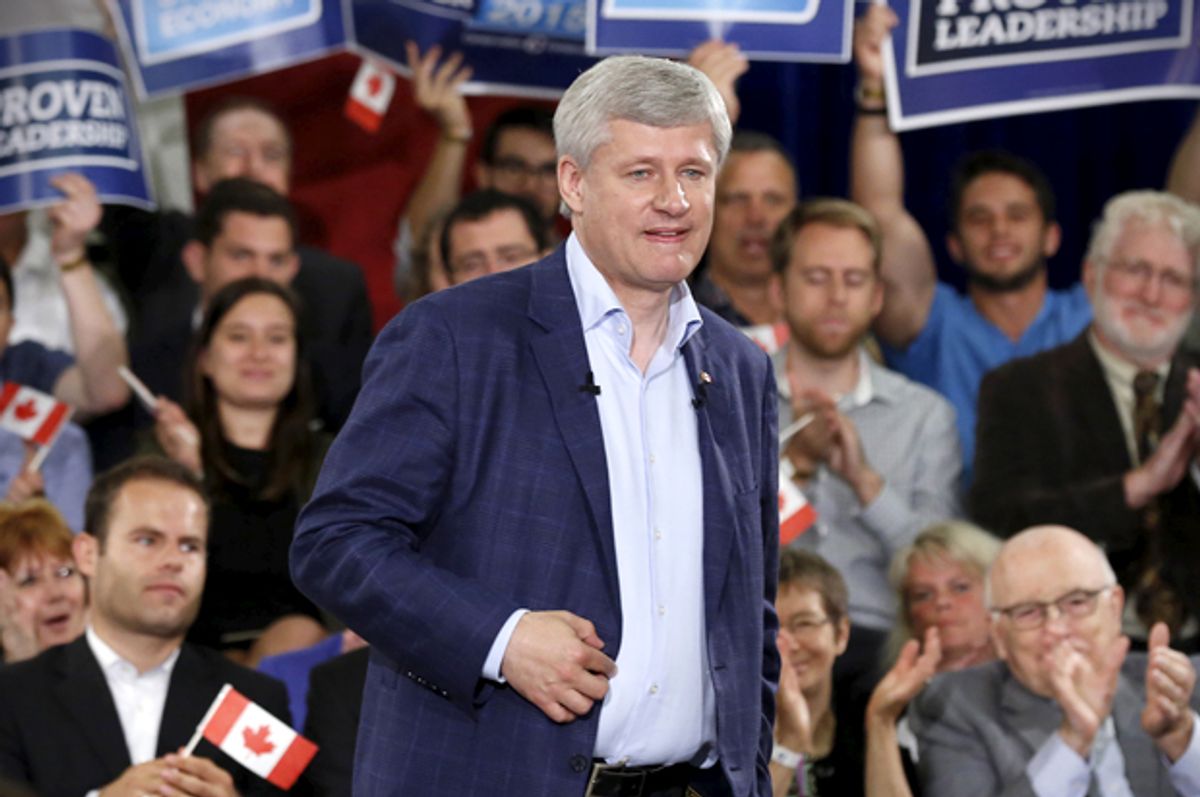 Last week, Canada’s Conservative party announced plans to set up a police hotline called “Report Your Neighbor,” which is exactly as terrifying as it sounds. This is the totalitarian nightmare of “Brazil” married to the paranoid delusions of “Arlington Road,” where all it takes is one malicious busybody deciding you look suspicious and poof! You’re an enemy of the state.

The justification for “Report your Neighbor” draws from that fulsome rhetorical well where the government just wants to protect innocent women and children from “barbaric cultural practices.” Which are what, exactly? According to Canada's Immigration Minister Chris Alexander, the practices they condemn are various forms of sexual slavery -- forced marriage, polygamy, and the like -- as defined by the “Zero Tolerances for Barbaric Cultural Practices Act” which passed this summer in Parliament.

Oh. Uh…okay! Then isn’t a tipline a good thing? Surely women and girls ought not to be left vulnerable to sexual exploitation, and concerned Canadians ought to be able to report it easily? It’s precisely because these plans staked the moral high ground while focusing on the salacious and titillating (instead of, say, different cultural attitudes towards letting dogs inside the house), that Joseph Heath was prompted to write, in a blog dedicated to Canadian public affairs, that “it was, I think, the most despicable thing that I have ever seen in Canadian federal politics. I’m not sure which was worse, the frontal assault on Canadian values, or the fact that it was masquerading as a defence of Canadian values.”

As Heath explained, polygamy and forced marriages are already illegal in Canada, and the country already has a tip line in place, called “crimestoppers,” to report regular crime. (It also has, I will add, a terror tip line that apparently doesn’t help very much at all because 92 percent of the calls are bunk, as well as existing “snitch lines” in place to report individuals suspected of immigration fraud.)

So if the “Report Your Neighbor” tip line serves no practical or legal purpose, why create it in the first place? Well, Heath opines:

“Suppose you suspect that your neighbour is a polygamist (not just a serial monogamist, like the rest of us). Should you call crimestoppers? Or should you phone it in as a ‘barbaric practice’? Or perhaps you suspect that there is domestic violence going on next door, and that the husband may kill his wife. Are you worried that this may be an ‘honour killing,’ or just a regular murder? On what basis will you make your decision? I think we all know the answer to that question. The ‘barbaric practices’ tipline will be used for surveilling and reporting on brown people, while the ordinary crimestoppers line will be used for white people.”

As he concluded grimly: “The only possible consequence of this policy is that it will encourage Canadians to discriminate against one another on ethno-religious grounds. I don’t see how the tipline idea can be construed in any other way – there is no innocent way of interpreting it.”

The criticism of “Report Your Neighbor” has been voluble, with news outlets emphasizing that the Conservative defense of “old-stock”— i.e. White --“Canadian values” is, rather, a coded way of validating Islamophobia in Canada, and that this fear-mongering has led to vicious physical attacks against Muslim women wearing the veil, including one pregnant woman. (The irony abounds, for it would seem that women and children could, in fact, use some protection from "barbaric cultural practices," just the ones that are being whipped up by the "old-stock" government itself.)

Meanwhile, internetizens have been grimly mocking the racism of “Report Your Neighbor.” Not only has a satire site popped up to target the Un-Canadian behavior of Conservatives, but the hashtag #BarbaricCulturalPractices has been skewering the campaign. In the spirt of satire, some tweets have proposed that un-Canadian offenses which ought to be reported include: pumpkin spice latte, cowl neck sweaters, being expected to drink coffee without maple flavoring (this being a form of torture as well), and putting up Halloween decorations before Thanksgiving. More serious “barbarisms” on the part of Harper’s Conservative government include: the dismantling of social safety networks, refusing to address the ongoing problem of missing and murdered Indigenous women, and the lack of clean water available to First Nations.

Yet the Conservatives’ racist strategy seems to be working: by defending “Canadian values,” the party is pulling ahead, and quite possibly because of, and not in spite of, its willingness to throw religious minorities and brown people under the bus.

The success of this strategy does not bode well for the future of life, liberty, and the pursuit of happiness in the U.S., where the Department of Homeland Security runs the program, “If You See Something, Say Something™,” which encourages citizens to report suspicious activity to local law enforcement. However good the intentions (and and yes, telling authorities about your suspicions can work), it only takes one bigot on a witch hunt to poison the community well: I can think of at least three law-abiding, gainfully employed, well-educated, native English-speaking, white collar, peaceful, bourgeois, minding-their-own-business neighbors who found themselves getting uniformed knocks on the door because they were the wrong ethnicity and/or the wrong religion. The North American continent is inching ever closer to the Thought Police of George Orwell’s "1984," where children were encouraged to report the disloyal utterances of their parents, with Big Brother whispering into suggestible ears, you hate them! Turn them in! as a future-past parody of indoctrinated children in Nazi Germany. But we are already steeped in the doublespeak of Orwell’s totalitarian regime, where “Report Your Neighbor” is just another way of saying: Support the Party, or Else.