The big father figure lie: Race, the Kardashians and the latest war on Black moms 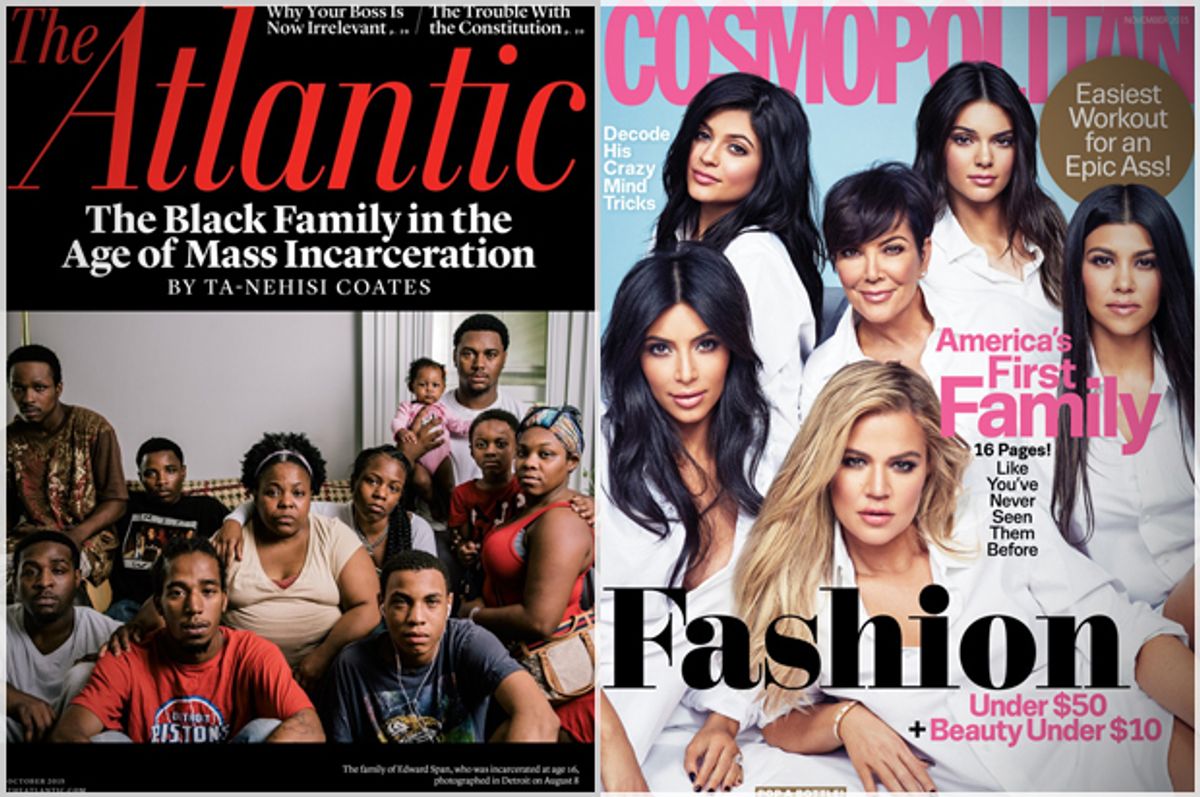 Cosmopolitan magazine has declared the Kardashians America’s new first family. Certainly, this symbolic dethroning of the Obamas is shot through with every kind of upsetting racial implication, a point Black Twitter has been swift to point out. Apparently now that the official first family is African-American, achievement of a nuclear family is no longer a mainstream cultural aspiration. While Black families continue to labor under the burden of being exceptionally normal like the Obamas or escaping the supposedly normal “pathology” of the non-nuclear Black family, Cosmopolitan is now giving white Americans an opportunity to visually revel in and experiment with embracing a white female-centered family structure. The cover image for Cosmopolitan’s November issue features America’s new chosen “first family” consisting of six white women, including Kris Jenner and her five daughters, three by her first husband, and two by her former husband Bruce Jenner, who has now transitioned into Caitlyn Jenner.

American families are changing, and we should celebrate the fact that the two-parent, nuclear family ideal has gone the way of the floppy disk. But the terms upon which we come to celebrate this family structure are deeply problematic. Why is it appropriate to celebrate Kris Jenner’s new status as the matriarch of a family of daughters, when we have pathologized Black mother-led families unrelentingly since 1965? Just last month, the Atlantic ran a photograph featuring a downtrodden-looking Black woman surrounded by several young men, women and babies, with no father-figure, to accompany Ta-Nehisi Coates’ cover story, “The Black Family in the Age of Mass Incarceration.” Fifty years ago, after Daniel Moynihan’s infamous report on “The Negro Family,” the absence of a father figure in Black households became a mark of cultural pathology. Black mothers bore the cultural refuse of this structural shaming of Black families.

The Moynihan Report induced a deep kind of cultural anxiety and shame about the failure of Black mothers and fathers to get married and stay married. The only balm that seemed to soothe this wound was the fictional Cosby family in the 1980s and the very real Obama family in the early 21st century.

Though Coates’ attempts to right this history by returning us again to the latest form of structural violence, namely our system of mass incarceration, which ravages Black family structures, his article does not resist the conclusion that something is wrong with families in which men don’t have a prominent place. Something is wrong with a system that has moved an alarmingly large number of Black men out of community and family structures that are nurturing and sustaining. Yet the visuals that accompany the article continue to mark that structural problem, through the body of the single Black mother.

This narrative is old and tired and not particularly productive. And it stands in stark contrast to the triumphant, jubilant family portrait of the Kardashian-Jenner family, now helmed by Kris Jenner. In this rendering, white women’s bodies mark freedom and triumph of a new American family structure, while Black women’s bodies continue to mark Black families as retrograde, pathological and downtrodden.

The Kardashian clan seem to mark a new set of familial possibilities. And in some ways, they do signal the future. The Pew Research Center reports that less than half of American children live in a home “with two married heterosexual parents in their first marriage.” In 1960, 73 percent of U.S. children lived in such families. But given that Black families have long experienced this shift away from the nuclear, traditional family, it is telling that we don’t see non-nuclear Black families as paving a path to the future of the American family. Black people, Black families, and Black women, especially, never mark the path to the future.

Certainly we should not overestimate the influence of Cosmopolitan magazine on the American populace as a whole. But this cover image does powerfully suggest the dethroning of white patriarchy, and the celebration of the strength of white womanhood. But the cover image obscures a range of practices that make the Kardashians unique. At least three of the daughters, Khloe, Kim and Kylie, have or have had significant romantic involvements with Black men. Kylie Jenner’s relationship with rapper Tyga, which began when she was 17 and he 25, continues to raise the ire of concerned millennials on social media who find the age difference inappropriate. There is also the fact that the Kardashian name became famous because of Kim Kardashian’s sex tape with singer Ray J.

In addition to the family embrace of interracial liaisons, there is also the fact of Caitlyn Jenner’s trans identity, and the fact that her white womanhood is noticeably absent from the Cosmo story.  The dethroning of the Jenner patriarch is a result of transness. Yet Caitlyn Jenner is not included.  This new version of the first family can be woman-centered and led, its members can experiment with cultural discomfort around interracial romance and even engage in what some see as taboo and exploitative sex acts like sex tapes and underage, interracial romance. But cultural firstness cannot celebrate or embrace transness. And it cannot make visible the female members of the family like Kim and Kanye’s daughter, North, who is not white. Thus this portrait of empowered white womanhood and traditional white femininity obscures the variety of ways that this particular family does not conform to the traditional dictates of white womanhood or whiteness.

The Cosmopolitan cover works to normalize the variety of ways that people build families. But normativizing imperatives always work by obscuring other truths. This attempt to render the Kardashians as both vanilla and sexy at the same time is not a set of possibilities that exist for any configuration of Black families, whether we are speaking of President Obama and the four women who live with him in the White House, or whether we are speaking of Patricia Lowe, the woman at the center of the Atlantic cover story.

The usurping of the “first family” title from the Obamas suggests that Black nuclearity is not especially attractive either. That Michelle Obama’s mother lives in the White House makes clear that the Obamas at best are merely approaching nuclearity. But when Black people manage to achieve something approaching nuclearity, then, it seems, the culture can move on.  Meanwhile white womanhood in all its iterations gets celebrated, and the manner in which the Kardashians now resist the norms of the nuclear family structure becomes a phenomenon worthy of cultural admiration rather than anxiety. Meanwhile many Black families continue to labor under the aspirational anxiety to be like the Obamas and a kind of aversive anxiety not to be like Patricia Lowe and her family.

Patricia Lowe’s family is represented as the kind of family that America still does not want to be, despite Coates’ argument about how Black families are victims of structures. That she has managed to hold together a viable family unit despite the ravages of the prison industrial complex is not seen as cause for triumph. Her family is understood only in terms of what it lacks, rather than in terms of what she and her offspring create each day in the way of structures of care, love and support.

These different visual representations of American families – the Kardashians, the Obamas, the Lowes—remind us yet again that through the lens of Blackness, creativity becomes pathology and through the lens of whiteness, “pathology” becomes creativity. These representations matter because they mark a universe of possibility.  Families matter because they, too, mark a universe of possibility. And all of these families offer us an opportunity to redefine what we mean by functional family – a functional family creates a reliable structure of care, love and support that protects us, helps us to survive, and grants us the tools to thrive. Every family that manages to achieve this is worthy of celebration.