"Steve Jobs": Michael Fassbender stars in a riveting three-act moral drama -- that has nothing to do with computers 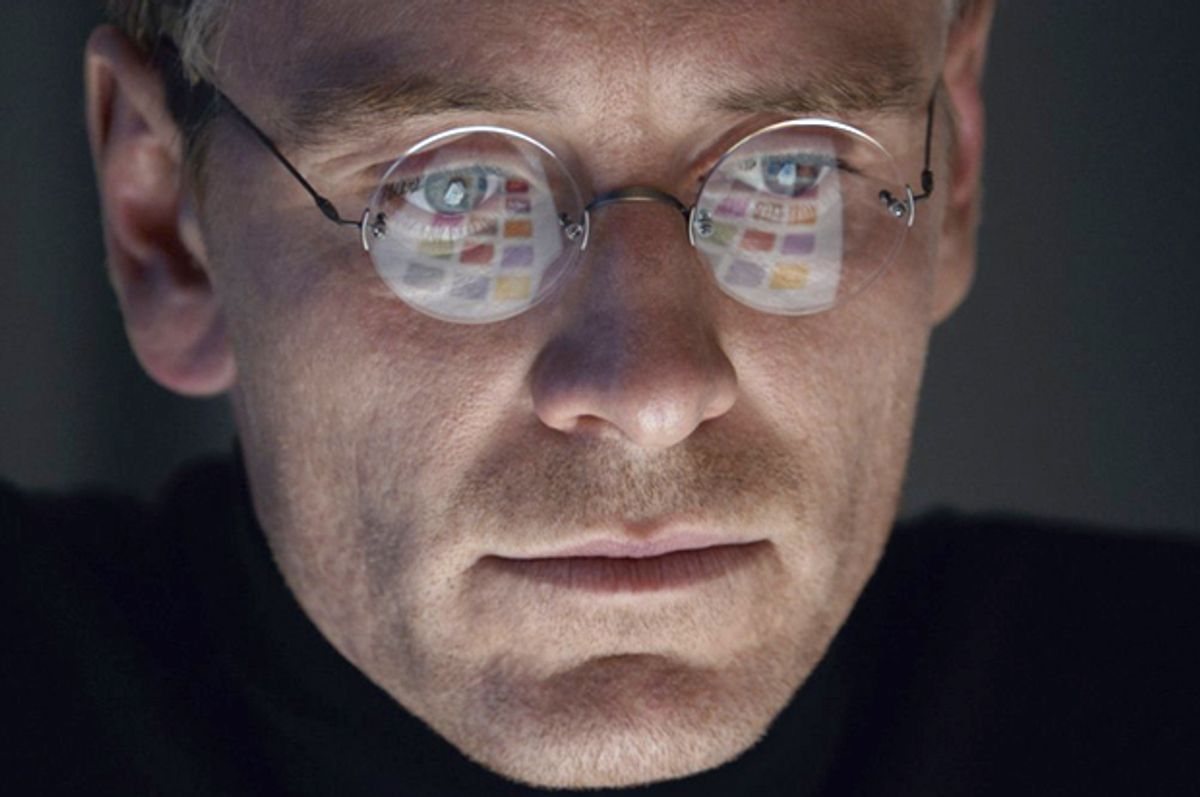 I don’t know how much the tormented, loquacious, obsessive-compulsive dad played by Michael Fassbender in writer Aaron Sorkin and director Danny Boyle’s riveting three-act backstage drama “Steve Jobs” resembles the actual co-founder of Apple, the guy who made technology feel like an extension of the human personality rather than its antiseptic antidote. I also don’t know how much that matters. Not to draw an invidious comparison right off the bat, but how much did Shakespeare’s “Henry V” have to do with the historical monarch who fought the battle of Agincourt?

This film and Alex Gibney’s highly critical but richly nuanced recent documentary “Steve Jobs: The Man in the Machine” barely seem to be about the same person, and brush against each other in only the most cursory ways. But the Boyle-Sorkin “Steve Jobs” is not a hagiography or a whitewashing. In fact, it’s not a biopic at all. Although I found Fassbender’s performance magnetic – the Irish actor gradually becomes Jobs, through some mysterious metamorphosis, despite looking almost nothing like him – the character we see backstage before three major product launches is frequently downright unpleasant and almost never resembles the sympathetic and “relatable” protagonist typically demanded by major motion pictures. If you find Steve Jobs relatable, you may need professional help.

Just as “The Social Network” was not about Facebook, “Moneyball” was not about the Oakland Athletics and “The West Wing” was not about the White House, “Steve Jobs” is not really about Steve Jobs or Apple Computer. Like nearly all of Sorkin’s work in movies and television, it’s about the moral interaction between public performance and private behavior, and about the difficulty many driven and talented people have in treating other human beings as if they mattered. Quite likely it’s a self-portrait to some degree, although there I lapse into exactly the kind of amateur psychoanalysis that Sorkin will cheerfully tell you he indulges in every time he sits down to write.

A few nights ago I moderated a conversation with Sorkin after a screening for the Writers Guild. Before laying out his psychological theory on Jobs – which is essentially that he was a profoundly damaged person who gradually came to understand how damaged he was – Sorkin hauled out a quip he has used many times before. “When I say stuff like this, you need to remember that I do hold a Bachelor of Fine Arts degree in musical theater,” he said. “So this isn’t just coming from some guy off the street.”

But that gag line contains buried meanings that are not superficial: Sorkin’s writing is always theatrical, and in this screenplay he has essentially boiled down Walter Isaacson’s whopping Jobs biography into a trilogy of one-act plays. And his language is inherently musical: The famous Sorkin “walk and talk,” the overly lyrical expository monologue in which a character reveals his or her driving desires, the zinger comeback uttered while leaving a room, the finely balanced back and forth between a man and a woman. If anything, “Steve Jobs” is so perfectly wrought and meticulously shaped a vessel that it leaves all verisimilitude behind and delivers a dramatic redemption or salvation that Steve Jobs never found in life. For most viewers, that won’t be a problem, and this is simultaneously Sorkin’s most satisfying movie script and Boyle’s most graceful work as a director

Many fans of Apple and Jobs were puzzled to learn that Sorkin had taken just three incidents from Isaacson’s authorized biography – three of Jobs’ product launches, yes, but none of the greatest hits. This movie ends in 1998, with Jobs’ return to Apple and the launch of the iMac, the friendly ovoid blob that came in many colors and was described by Jobs’ daughter Lisa (in the movie, at least) as “Judy Jetson’s Easy-Bake Oven.” There is no such thing as an iPhone, still less an iPad, and people who want to listen to music while they walk around have those clunky portable CD players. In one of his final scenes with Lisa, Jobs tells her he’s going to fix that problem, which is probably a bit of Sorkin-esque cheating – the iPod was not launched for another three years.

But the structure of “Steve Jobs” makes perfect sense once you understand that Sorkin is essentially not interested in the story of Steve Jobs as a technological innovator or a corporate visionary. He’s looking for moments of dramatic tension and personal crisis in a famous person’s life, and is entirely willing to fictionalize them for effect, as was done in, say, the lives of the saints written by church historians centuries after their deaths. The moral spine of all three episodes in “Steve Jobs” is not Jobs’ relationship to his machines, but his relationships with a “West Wing”-style core group of people around him and especially with Lisa, the illegitimate daughter whom he denied for years and resisted getting to know.

In the first act of the film, it’s 1984 and Jobs is preparing to unveil the Macintosh desktop computer at the Flint Center in Cupertino, California – then a relatively obscure Silicon Valley bedroom community, and now famous all over the world as Apple’s hometown. The second chapter takes place four years later at the War Memorial Opera House in San Francisco, after Jobs has been hounded out of Apple and is preparing to launch the NeXT, an overpriced, overdesigned and underpowered cube that was effectively a Trojan horse directed at his former company. Then we skip a full decade, to Jobs’ reconquest of Apple and the iMac launch at Davies Symphony Hall, just across the street. (All the locations are genuine, and it really does make a difference.)

Boyle’s design team doesn’t go over the top with the ‘80s and ‘90s styles and signatures – although we certainly see oversize glasses and enormous shoulder pads – but each section of the film has a distinctive visual flavor. For the opening section, in 1984, cinematographer Alwin H. Küchler uses old-school 16mm film, lending the scene a subtle grain and slightly washed-out colors. In 1988, we get the richness and sophisticated color palette of 35mm, and for the late ‘90s Küchler switches to the relentless digital clarity and “contemporary” feeling of the Arri Alexa.

There’s a problem with the computer Jobs plans to unveil at the Flint Center: It doesn’t work. At least it doesn’t say “hello,” or not without a little backstage trickery, and Jobs is utterly inflexible on this point. (That part, Sorkin says, is actually true.) As for the Apple founder, who is about to risk his wunderkind reputation on a machine that will be a disastrous failure, he doesn’t want to say hello either. Not to the eager journalists, not to the technical wizards he alternately berates and patronizes – Seth Rogen plays Apple co-founder Steve Wozniak, and Michael Stuhlbarg is software genius Andy Hertzfeld – and not to his ex-girlfriend, Chrisanne Brennan (Katherine Waterston) or the little girl he insists is not his daughter. Chrisanne and Woz and Hertzfeld come and go throughout the movie, as each is subjected to Jobs’ baleful glare, and for obvious reasons Lisa is played by a different young actress in each section.

Jobs’ confidante and antagonist and external voice of conscience, throughout all three episodes, is Apple marketing head Joanna Hoffman (Kate Winslet), constantly trying to make the angel-on-shoulder argument that he would still be Steve Jobs even if he stopped treating other people with vicious disregard. If Fassbender is almost never off screen – there are two brief shots where he is not visible – Winslet is present only slightly less, and turns what could have been an overly “womanly” amanuensis role into a steely, angry and ultimately irresistible force of ferocious power and emotion. If there’s an Oscar in this cast, beyond the one for which Fassbender will surely be nominated, it’s hers.

Another voice of normalcy from the outside world is supplied by Jeff Daniels as Apple CEO John Sculley, whose role here is largely a Sorkin invention. In real life, Sculley’s famous falling out with Jobs after the Macintosh fiasco of ’84 led first to the latter’s dismissal from Apple and then to the former’s, and the two men never spoke again. Sorkin says he had a lengthy email exchange with Sculley, who is now retired in Florida and has never spoken publicly about his days at Apple, and decided to give him a chance, in dramatic form, to say all the things he wanted to say to Steve Jobs but never did.

I’m perfectly fine with that decision, largely because any chance to watch Daniels act is a chance worth taking, and because Sorkin’s concocted confrontations between Jobs and Sculley are richly enjoyable. But it exemplifies the fact that “Steve Jobs” is a work of imagination and reinvention, not of biography or history. It’s a moral survey of American life on the cutting edge of the late 20th century as we wish it had happened (during the administration of President Jed Bartlet, in effect), rather than as it did. It’s a moving and magnificently crafted story about a person named Steve Jobs who was brought low by pride and arrogance and then redeemed by love. It might be a story that mirrors our dreams and desires, which is what the real Steve Jobs did too, and in that sense maybe it’s indirectly about him. It’s definitely not about a guy who built and sold computers.