Arrogant, unfunny, obnoxious, smarmy: Jay Leno has always been the worst. Why won't he leave us alone? 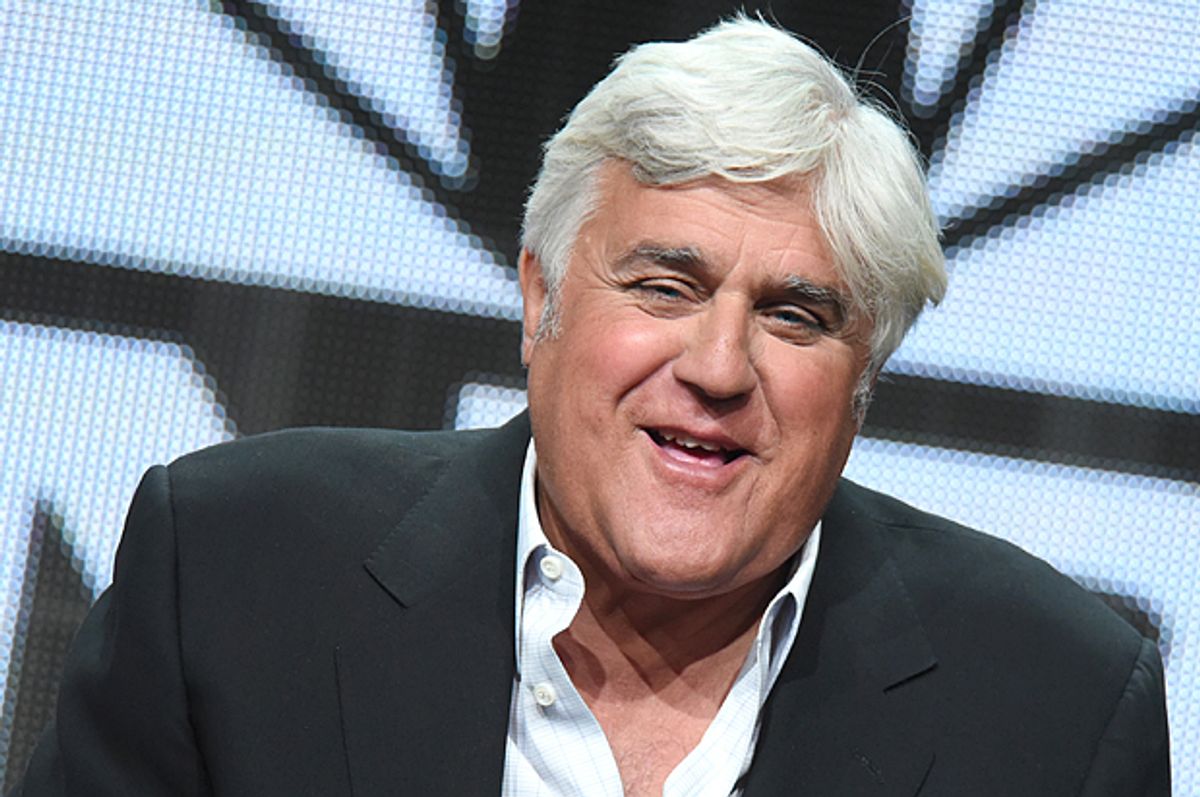 If you took David Wooderson from "Dazed and Confused" and then replaced his charm and charisma with smarmy millionaire arrogance and defensiveness, you would have Jay Leno.

Leno, the kid who graduated years ago but still hangs around the school feeling, inexplicably, like a bigshot, appeared on Jimmy Fallon's "Tonight Show" Tuesday to "tag in" for the monologue after Fallon pretended to pull a hamstring. It was a typical Leno routine, a series of gently joshing "Oh, yeah, I went there!" jabs at the intelligence of the Kardashians and the hair of Donald Trump. Did you know Osama Bin Laden lived in a house with seven women and 23 children? "I'm surprised the guy didn't shoot himself in the head!" Because women and children! Ha! Also: He's only been dead four years so... topical! The bit then ended with Leno and Fallon trading rapid-fire "The economy is so bad…" quips, and then Leno sank back into the shadows and returned to his underground lair.

The trotting out of the show's former host was a promotion stunt for Leno's new CNBC show, "Jay Leno's Garage," which debuted Tuesday. It is literally about the cars in Jay Leno's garage. And if that's not proof the Peacock Network's infatuation with Leno, nearly two years after he stepped down from the "Tonight Show" — well, two years after he stepped down for the second time -- is bottomless, I don't know what is. You may recall that Leno first retired in 2009, five full years after Conan O'Brien was picked to be his successor — and you may also recall how disastrously that all went down. Since then, Leno — who also famously burned more than a few bridges with David Letterman over the years — has still managed to hang on to his position as the most smug person to ever grace late night. Last spring, he cropped up on James Corden's brand new show to ominously crack, "In three months, this show will be mine." And in a Tuesday interview with Adweek, he explained his absence from Letterman's last episode, saying, "Well, I asked Dave to do a 10-second tape for us [when I left]. Anything, just, 'Leno who?' They said no, they didn't want to do it. Well, why am I going to run all the way to New York? I mean, quid pro quo. I just said, 'No, that's kind of silly.'" Classy!

See, when you've been privileged to have hosted the "Tonight Show" — twice! — and you're pretty well-known as the guy who drove off two of late night's biggest hosts and you're doing a new show about your collection of expensive cars, acting petulant and resentful is not a good look. You're 65 years old, man. Act like a grownup. Stop hanging around the old playground. Bury the hatchet with your foes — or at least be gracious about them. Because for all your impressive autos, you sure seem like a guy running on fumes.